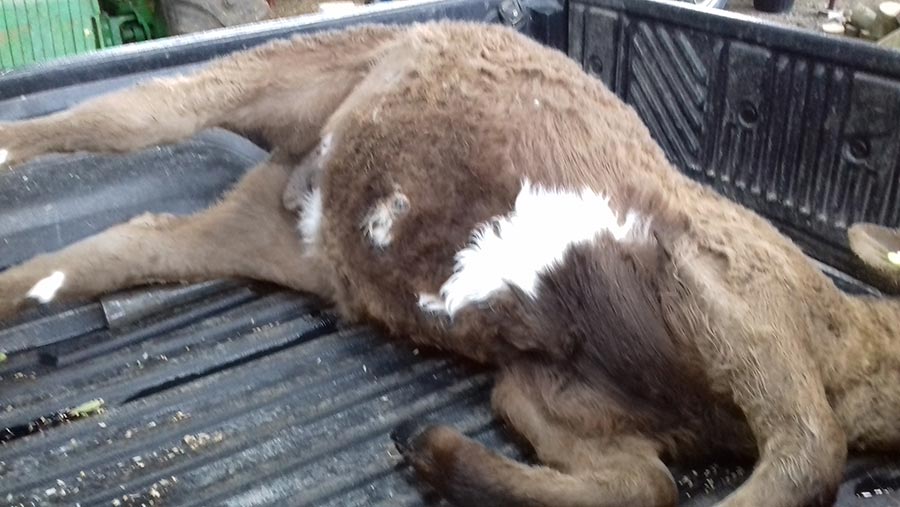 A Cambridgeshire livestock farmer has blamed a fireworks display for killing one of his calves – leaving its mother distraught.

See also: Farmer Focus: Are fireworks and bonfires worth the hassle?

Farmer Basil King, who farms in partnership with his son Matthew, went to check his stock on the evening of the display and found them stampeding around the field having been spooked by the fireworks.

There was a mixture of cows in calf, cows and calves at foot and a pedigree Simmental bull in the field.

The cows were grazing in fields let by a neighbour on a grazing contract and additional to Mr King’s main holding, Rectory Farm in Godmanchester.

The 60-year-old farmer said: “The fireworks were being let off 150-200m from my cows, which were still out grazing in the field.

“They were big fireworks that sounded like mortars going off. Livestock are not intelligent enough to know it’s not going to harm them.”

Mr King tried to settle the cattle by putting feed down, but found a number of young calves were being trampled and pushed around by the older cows who were “completely stressed and running blind”.

He could not access his stock in the usual way as the lane leading to the field entrance was blocked by spectators’ vehicles.

The next morning, Mr King went to check his stock and found a three-and-a-half month old bull calf dead in the field. Other cows were still distressed and agitated.

A post-mortem examination found the 113kg calf suffered a haemorrhage, pulmonary congestion and abundant fluid in the stomach. The cause of death was “acute stress, possibly due to the fireworks in the field”.

Cambridge Fireworks, the company that provided the display, provided Godmanchester Community Association with a risk assessment, which stated they had a duty of care to notify neighbours of the display in respect of animals and livestock.

However, Mr King said he was not told about the event in advance and was unaware that it had been moved to the football ground.

He has instructed Bletsoes land agents to make a claim on his behalf for the financial loss due to not being able to rear and fatten the bull calf.

In addition, the cow whose calf has died is now carrying milk with no calf to feed, and is “out of sync” in terms of calving, depreciating its value to the herd.

“It’s not so much the loss of money, but we need to prevent this from happening again,” said Mr King. “There are laws around not hosting fireworks displays too close to livestock. They should be adhered to.”