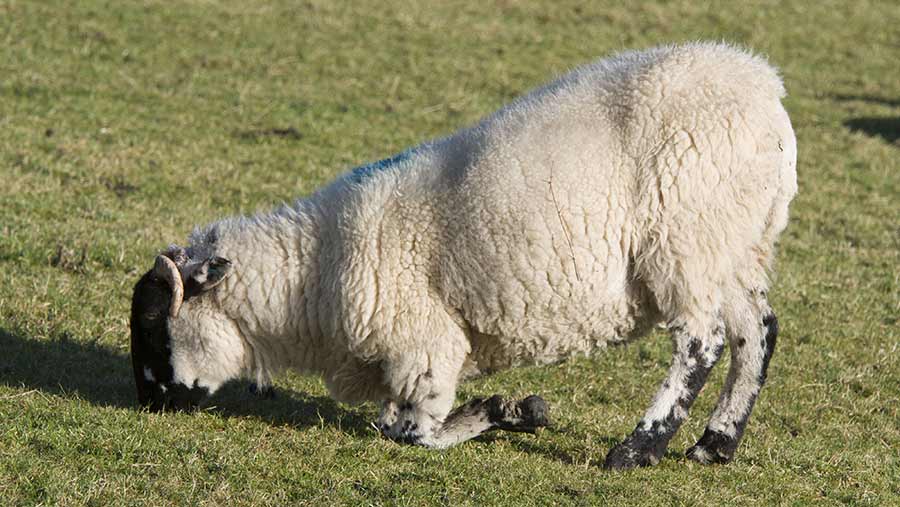 Lameness in sheep is not only detrimental to the animal’s health, but has repercussions on performance and profits, estimated to cost £89.80 a case.

Government targets from the Farm Animal Welfare Committee have encouraged producers to work towards stamping out lameness in the national flock and figures have fallen.

Initially Mr Fychan was using four of the five steps from the five-point plan, but he wasn’t vaccinating his flock. This included a rigorous culling policy, but lameness was becoming an increasing problem.

See also: How to correctly diagnose and treat the main causes of lameness

“We’d been having real problems, with lameness getting worse year on year. I think we’d been buying in problems for years, such as disease and possibly wormer resistance,” he says.

After a scare in the summer of 2016, when he feared one ewe had brought Caseous lymphadenitis – a chronic, contagious skin disease – into the flock, he decided to take a fresh look at biosecurity.

As part of his approach to tackling biosecurity, he decided to run a closed flock and has opted for buying wool-shedding-type rams to cross with Welsh Mules for breeding his own replacements. 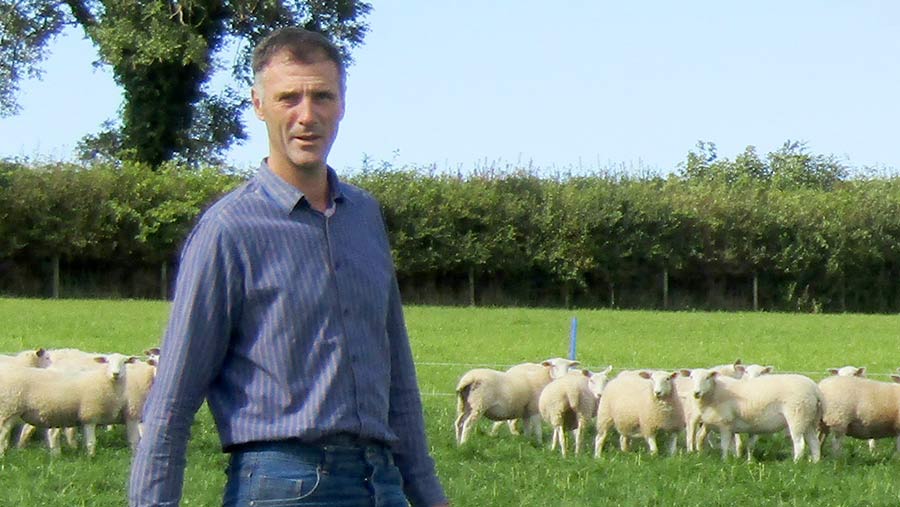 “Admittedly the reasoning behind changing the flock isn’t just based on problems with lameness,” he explains.

“We’re trying to work without feeding concentrates to the ewes, helping to cut production costs, and by introducing the wool-shedding types and focusing on high silage quality, we’ve managed that.”

His system previously involved bringing the single ewes in at scanning and the twins, triplets, and ewe lambs come in for a few weeks at the end of February/ beginning of March, to rest the grass. However, foot-rot was causing him problems while the ewes were housed.

There are a number of causes of lameness in sheep:

“It got to the point where we could be treating half the single-bearing ewes with antibiotics to try to get on top of it. Not only were we spending a lot on antibiotics, but we were also culling extensively.

“I spoke to our vet and after going over our current practices aimed at reducing lameness, we decided that the final step in getting on top of it had to be vaccinating the entire flock.”

Mr Fychan first vaccinated in August 2016, then in January/February 2017, and again in the lead-up to tupping. After that he went to vaccinating twice a year. “I realised immediately I was so wrong not to use it. It has transformed things.

“It’s a waste of time only doing four of the five points in the plan. I don’t know why we didn’t vaccinate sooner – the difference has been incredible.

“We’ve gone from spending time and money treating lameness, using a lot of antibiotics and having a very high culling rate, to no instances of foot-rot at all in 2017.”

Though vaccinating hasn’t totally eradicated contagious ovine digital dermatitis from the flock, Mr Fychan has only had two ewes go lame with it in the past year and estimates his total flock lameness to be about 1% – down from 15-20% before vaccinating.

He now keeps accurate records through the EIDs of ewes that go lame and avoids keeping ewe lambs from these animals.

“I wish I’d vaccinated years ago, it would have saved a lot of money.”

Targeted to help farmers control lameness in their flock by providing an easily applicable framework, the five-point plan can help increase a sheep’s natural resilience to lameness, improve flock immunity through vaccination and reduce the disease challenge. The five points are split up under three headings:

1. Cull – An aggressive culling policy is advised in the first year.

2. Avoid – Reduce the spread of infection around handling and high-traffic areas by spreading lime and improve underfoot conditions.

3.  Treat – Catch sheep within three days of becoming lame, clean the hoof but don’t trim, and diagnose with the help of a vet. Treat and mark the animal afterwards. Then cull if it gets lame again.

4. Quarantine – Bought-in animals pose a risk, so it’s advisable to quarantine them for 28 days to see if they show any signs of problems.

5. Vaccinate – There is a licensed vaccine for treating and preventing foot-rot. A biannual whole-flock vaccine is advised at housing and after shearing for best results.