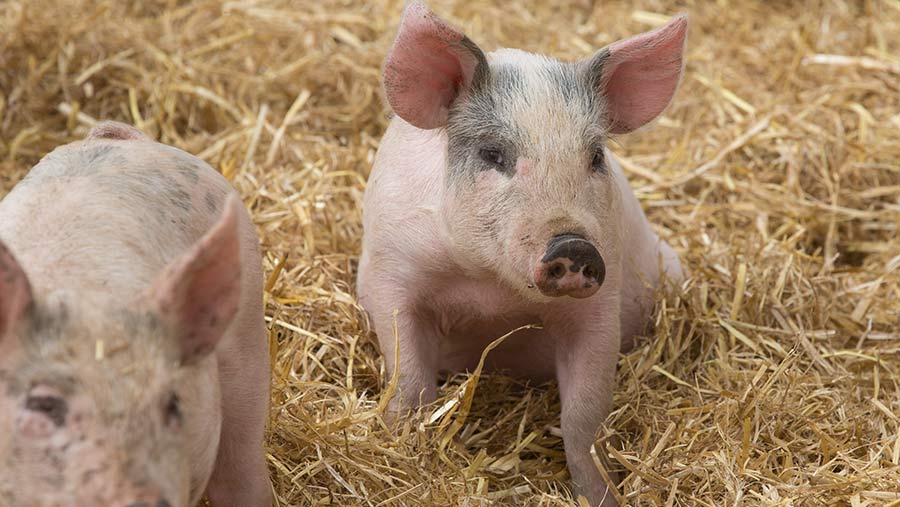 Taking time to look at the behaviour of your pigs can tell you a lot about their health and welfare before visible problems arise.

According to animal behaviour expert Kees Scheepens, farmers can often get blinded by routines, meaning they may miss subtle changes that could end up having an effect on a pig’s health and welfare.

Dr Scheepens outlines some key pig behaviours to look out for and gives advice on minimising stress.

Dog-sitting position. In younger pigs this can indicate illness or stress.

Ears pinned back. Again this is a sign of stress or illness. Piglets that have experienced intrauterine growth restriction often have  pinned-back ears and a dolphin-shaped nose, bulging eyes and wrinkles to the mouth. The survival rate of these animals is often poor.

Recumbent lying position (on side) with legs stretched out. This is a positive sign and indicates the pig is relaxed. In lactating sows this is important as it maximises piglet access to the udder and colostrum/milk intake.

The scientific term for this is chromodacryorrhea, and they are not actually blood. When a pig is stressed it can release a liquid from a gland under the eyelid, giving a brown stain around the eye. If more than 10% of pigs have these bloody tears, it is an indicator that something is causing stress to the animals.

Stressed pigs tend to react in one of two ways, either becoming aggressive or passive and withdrawn. Research has found that where flank or tail biting has started there will be visible marks for about a week before more serious wounds appear. During this week it is possible to try to identify the stressor and correct it, to prevent the behaviour leading to more serious injuries.

Severe staining from meconium (first stool) can indicate that the piglet will have been stressed during the birth process. There are various causes for this, but one can be a long-drawn-out birthing process. As litter sizes have increased, so too have birthing times. When piglets are stressed, they can defaecate their meconium and then breathe it in, which can cause respiratory difficulties at birth.

Pigs will normally want to sleep for 18 to 20 hours a day. If pigs are showing increased signs of activity and exploration, this can indicate a stressor and can lead to undesirable behaviours such as tail biting.

What causes stress behaviour and how to minimise it?

Mixing litters. Research has found that keeping litters together throughout their lifetime results in less stress, improved health and increased performance (see table). It can also create a more relaxed farm environment and reduce labour.

All piglets are born with different coping strategies and are often split into pigs that will either fight, take flight or freeze.

Their behaviour will also determine whether they become a victim, a performer or a successful coper (ie a pig that can cope with stressful situations).

Breeding companies can have an influence on pig behaviour, with some companies focusing on breeding pigs with reduced aggression.

An upset in the physiology, gut microflora or immune system can cause an animal to become distressed.

That pig may be smaller than others and not be able to compete for feed. This can have a knock-on effect on growth. It may also be more prone to bullying from other pigs.

Competition for feed will increase stress within a pen. This can be combated by having enough feeding and drinking areas for the pigs.

The type of feed can also have an influence on pig behaviour. A study has found that increasing the fibre content of diets from 3-4% to 12% resulted in more pigs having healthy tails (increase from 71% to 82% with healthy tails).

Farmers can increase fibre by including sunflower seed hulls, bran and extruded oats.

Pigs learn from each other after weaning and one thing they learn in the weaning pen is how to find feed.

It is important not to switch the lights off in the first three to four days after weaning, so they can find the food anytime of the day.

Pigs are natural foragers. By law enrichment must be provided for pigs. A study found that access to hessian bags halved the amount of tail biting in weaners.

Suspended branched metal chains, which are long enough to reach the floor from a hanging position, have also been found to reduce tail biting.

Cold air. Pigs will not cope with cold air. The maximum airspeed at floor level should be 0.15m/second for piglets and 0.2m/second for finisher pigs.

Farmers can measure air speed using smoke tablets. Cold air can cause diarrhoea and ill health because of the stress.

Cold air can be caused by too much ventilation capacity, nests not being covered in the farrowing pen, and drafts.