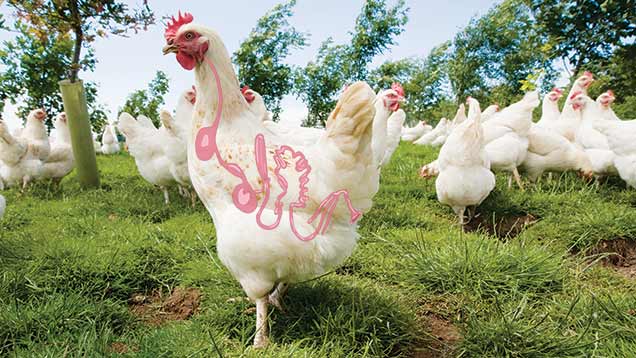 The better a chick’s gut develops in the first days of its life, the better its performance will likely be for the rest of it.

A basic premise, and one most will have heard. But what’s the science behind it?

It’s principally the development of surface area within the gut, which is dependent on the growth of villi, tiny strands lining the wall, according to Dr Richard Bailey, a researcher at Aviagen.

The larger these villi grow, the greater the surface area, and the more opportunity for feed to be effectively absorbed – ultimately translating to efficient bird growth.

“During the first week of life the gut tissues undergo rapid development and the villi at the gut surface elongate,” explained Dr Bailey at a recent Society of Feed Technologists meeting.

This growth stems from two areas of expansion, at the base of the villi and in the middle. After seven days the middle centre of growth reaches maturity and only the base continues growing.

“That is why optimal brooding conditions, with easy access to feed and clean water, are essential for good post-hatch development and the long-term gut health of the flock.”

A shock or interruption to this development can be a huge setback.

“Another key factor is the stimulation by intestinal microbiota,” added Dr Bailey. “Villi length has been shown to be stimulated by lactobacilli – the dominating bacteria in the small intestine.”

Some of this microbiota will be present in-ovo, but the majority will find its way into the guts of poultry post hatch. “Sources of bacteria include the farm environment, the feed, the water supply and the litter on to which birds are placed.”

While having as clean a shed as possible will undoubtedly reduce the risk of pathogens being present, it can also hamper the early bacterial development of poultry guts.

“The application of probiotics and competitive exclusion products has been shown to aid the maturation of the intestinal microbiota, and enhance the development of gut tissues.”

So a well-balanced bacterial population in the gut is one which promotes the effective absorption of feed. If things tip out of balance, which can happen when birds are exposed to stress, the integrity of the gut can quickly break down.

A common result of imbalance in the gut is dysbacteriosis – an overgrowth of microbiota leading to enteritis – often seen following stressful events.

Another negative effect of stress can be the release of hormones into the gut, which can stimulate the growth of pathogenic bacteria such as E coli and salmonella.

During the life of a broiler, several feed changes occur, where a ration’s nutritional profile is changed to meet the bird’s varying needs. As bacteria all have a preferred nutrient source, changes in diet can cause a shift in the composition in the microbiota.

Typically the gut copes with these changes without any problems. But if the gut is already under pressure due to other stress factors, then a feed change can tip the balance of gut homeostasis.

Maintaining the balance of gut bacteria over these periods, often by employing probiotics or other gut health products, such as organic acids, is a sensible way of inhibiting the growth of undesirable bacteria, said Dr Bailey. It may also reduce the need to use antibiotics.

The span of research into reducing campylobacter in poultry goes from the very large, such as expensive machinery in the slaughterhouse, to the very small. And it doesn’t get much smaller than bacteria in the guts of chickens.

Dr Arjan Narbad, a researcher at the Institute of Food Research, told the conference certain probiotics had been identified that appeared to reduce campylobacter in the guts of poultry by up to four logs.

“Despite all our emphasis on food hygiene, we still have a problem with food poisoning,” said Dr Narbad. “Our idea is to try and control those pathogens at the farm level. We want to use the principle of competitive exclusion.”

The work began during the 1980s, in what was the first drive to kick salmonella out of the food chain, but soon fell out of favour.

More recently, a strain of lactobacillus has been found to exclude the pathogenic bacteria Clostridium perfringens, and on-farm trials are currently under way to assess its efficacy in the real world.

Initial tests have also been carried out with campylobacter, and have shown promise.