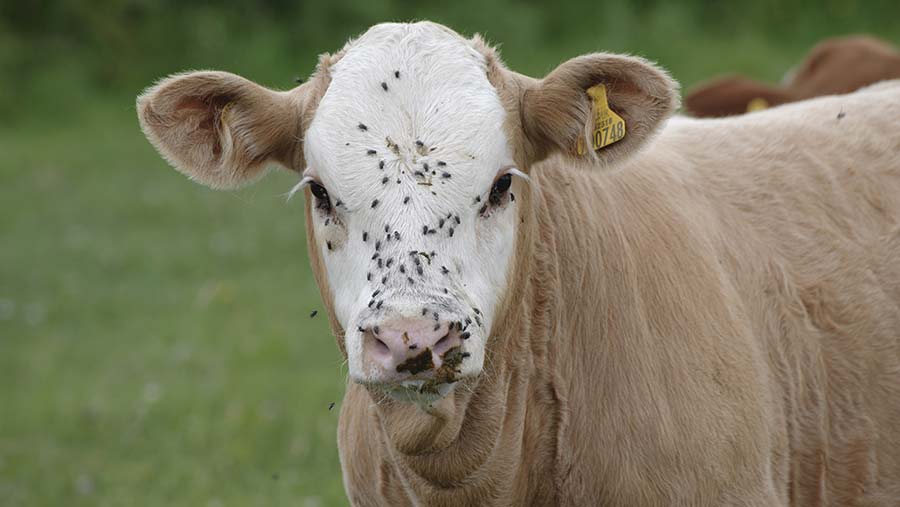 The annual emergence of headflies could be made worse by the current spell of warm and wet weather across the UK, a researcher has warned.

The headfly (Hydrotaea irritans), with its characteristic yellow abdomen and orange wing base, typically emerges in mid-July.

Although the insect is not a blood-sucking type, like the stable fly and horn fly, it does cause considerable irritation to cattle.

The flies are attracted to the head and udder to feed on proteins in saliva, tears, sweat and milk. These secretions are also used to mature the eggs.

Cattle affected by headfly move to the shade and are restless, leading to less time spent grazing and decreased performance.

Research has also linked headfly with the transmission of summer mastitis in dairy cows and heifers, as they feed on secretions from the teats.

John McGarry, fly specialist at the University of Liverpool’s Institute of Veterinary Science, said headflies hang around in woodland and travel to and from cattle several times a day.

These are followed by females in the last two weeks of July, which lay batches of eggs in the pasture soil during August and September.

“They grow slowly for 10 months before emerging the following summer as adult flies,” Dr McGarry said.

He advised avoiding grazing on wet, low-lying fields near woods from July to September to help reduce headfly numbers.

Headflies are more of a problem in the north of the UK than the south, said Dr McGarry. But stock should be checked at least once a day, wherever the herd is located, he added.

“Chemical control, ideally given at turnout, may include insecticide-impregnated ear tags which give five months’ cover.

“Pour-on treatments are also available. These need re-applying every three weeks, depending on the fly challenge and if there has been heavy rainfall.”

“Alternatively, sprays applied via a knapsack have a repellent action, but again, do need re-applications,” Dr McGarry advised.

Where insecticides are not used, applying teat sealant to pregnant heifers and dry cows can help stop the spread of summer mastitis bacteria by flies.

Garlic licks, fly trapping and the use of fly predators, may offer some form of fly control, but there is little evidence to support this in grazing animals.

The cost of each treatment varies on who is selling it and on the longevity of its effect, but ranges from £3/ear tag to 50p/dose for a pour-on – which may need doing several times in a season.