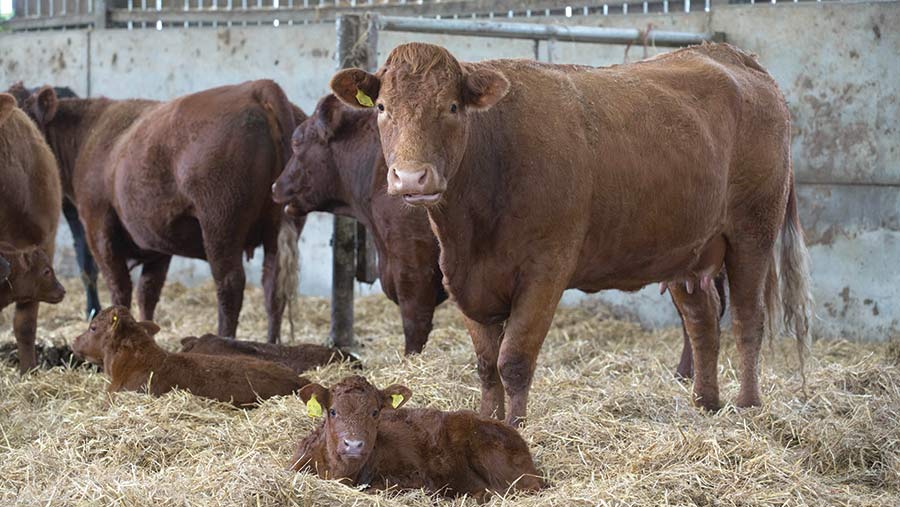 Just a single case of abortion represents a substantial loss, particularly in beef herds where an affected cow is rendered unproductive for the year.

There may also be the additional cost of buying a replacement calf to foster on to a cow that has aborted, which in itself presents new risks to the herd.

See also: How to prevent and treat a salmonella outbreak on farm

There are multiple causes of abortion and the incidence at herd level also varies markedly. But management steps can be taken to reduce its occurrence.

Vet Alwyn Jones of SRUC Veterinary Services outlines the possible causes and suggests how the impact of abortion can be reduced.

Broadly speaking abortion causes in cattle can be categorised as infectious or non-infectious.

The disease is still an important cause of abortion but is less common in the UK, probably due to vaccination.

Where they still occur, abortions can be preceded by respiratory disease in the herd.

The virus is carried to the placenta and infects and kills the foetus. Abortions can be seen at any stage but typically from four months until term.

Bovine viral diarrhoea (BVD)
BVD is a contagious viral disease of cattle that can be transmitted directly by infected animals, or indirectly by contaminated vectors including visitors or equipment.

Abortions caused by BVD can affect the pregnancy at any stage.

PI calves are the main source of virus and maintenance of infection in a herd.

Bluetongue
Bluetongue is caused by an orbivirus and is transmitted by biting midges of the genus Culicoides.

Infection can result in abortion, mummification, stillbirth, or the birth of live deformed calves.

Schmallenberg
The Schmallenberg virus is an orthobunyavirus that has been associated with disease in ruminants across Europe.

Its common name is derived from the German town of Schmallenberg where it was first isolated in 2011.

The disease is transferred by biting midges in the late spring and causes abortion and foetal malformation.

Salmonella
Salmonella can cause outbreaks of abortion – so-called abortion storms – within herds rather than isolated and sporadic cases, typical of some other causes of pregnancy failure.

S dublin is the commonest salmonella serotype associated with abortion in the UK, accounting for up to 80% of salmonella-induced abortions.

Bacillus licheniformis
This an endospore-forming bacterium that occurs in plant and soil.

Abortions are most common in housed spring-calving beef cows fed on pit silage in the last two months of pregnancy. It can also have a role in stillbirths.

The bacterium is present on all farms – in the environment, slurry, silage and water troughs. It is the most common cause of abortions identified by the SAC over the past few years. 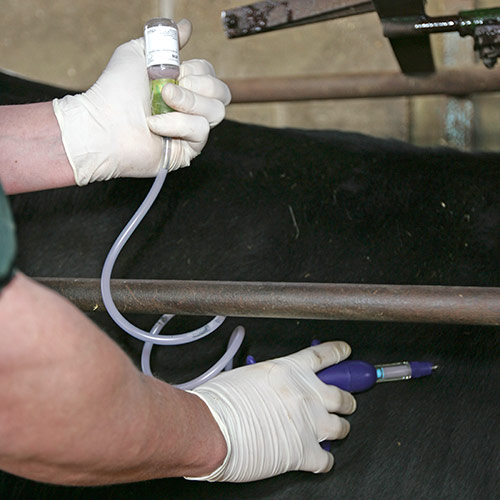 It is most commonly associated with abscesses, but can enter the blood stream and infect the uterus lining (endometritis) and placenta.

Leptospirosis
This bacterium can infect the placenta and cause septicaemia (blood poisoning) in the foetus, leading to abortion.

The bacterium can be picked up by the dam from other infected cattle or from water and feed contaminated by wildlife, in particular rats, or dogs.

Abortions occur throughout pregnancy and are usually sporadic, but infection can result in larger numbers of cases in a herd.

The cow becomes infected after consuming oocysts in silage or at grass which have been contaminated by infected dog faeces.

Dogs do not show any symptoms of the disease so an apparently healthy dog may still be a carrier. The organism is not passed from cow to cow.

Calves that survive from neospora-infected dams carry an increased risk of aborting if they go on to breed. Neospora can be associated with sporadic abortions or abortion storms.

Abortion caused by fungal infection is often sporadic and most common when poor-quality mouldy forage has been offered.

Abortion is triggered when fungal elements pass into the bloodstream and infect the foetus via the placenta.

However, causes such as genetic abnormality can account for a significant proportion of cases.

Research shows this may account for up to a third of cases.

Toxicity
Ingestion of plant toxins such as hemlock can leads to abortion.

Twinning
The burden of growing twins can cause competition for nutrients and other hormonal factors.

The risk of infectious abortion can be reduced through effective biosecurity and a closed herd policy or quarantine of bought-in replacements and stock bulls.

Vaccination
Vaccines are available against some important causes of abortion including BVD, leptospirosis and IBR, and these can play a key role in herd protection. 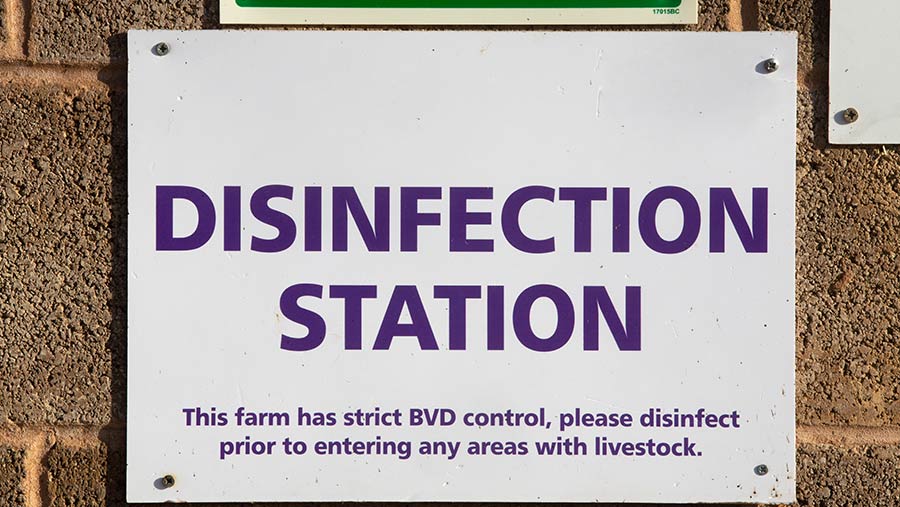 This doesn’t replace good herd biosecurity, which should be discussed with your vet.

If the herd is not already part of a health scheme such as the Premium Cattle Health Scheme, it is a good idea to investigate joining one.

A vaccination programme is even more important if stock is bought in.

Record-keeping
Cows that have aborted should be noted and cross-referenced against the sire details.

This could help identify a pattern that exposes a non-infectious cause, such as a genetic abnormality passed on by a particular bull.

Nutrition
Mouldy hay or silage may contain fungi or bacteria which can cause abortions, and should not be fed to the breeding herd.

It is important to assess feed and forage quality and feed the best available silage to cows in late pregnancy.

Biosecurity
All incoming stock should first be isolated and ideally screened for BVD and then quarantined before they are integrated into the main herd.

Wildlife
Birds and rodents must be kept out of feed stores and troughs because they are key vectors for salmonella and other bacteria.

For neospora, enhanced biosecurity measures should limit dog access to cattle areas, feed and water sources. Food stores on farm should be dog-proof.

Keep dogs away from calving areas and all abortion products such as the calf and placenta. 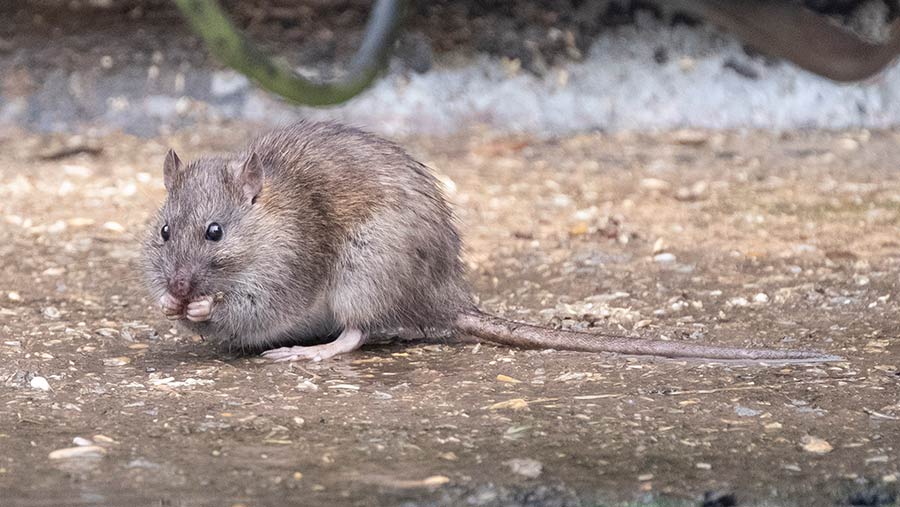 Staff
It is good practice to have disinfectant dips outside quarantine areas for incoming stock and isolation units used to house cows which have aborted.

Boots should be brushed and dipped, hands washed and clean overalls used when moving from quarantined areas to the main herd.

If sufficient staff are available, individuals can be assigned to work only with quarantined stock.

Where labour is short, a regime can be established which handles all of the clean stock first, before moving on to the isolation units.

When cattle abort there is a potential risk of infection of other species including humans – a process termed zoonosis.

Diseases that cause abortion such as salmonella, Q-fever, chlamydia, listeria and leptospira are all potentially zoonotic agents.

The young, the elderly and pregnant women are most at risk. It’s advisable to ensure these people are kept away from aborted cattle and foetal material.

That also applies to overalls and clothing that has been contaminated with foetal membranes, so anyone handling dirty laundry could be at risk and must take precautions.

The first action when a cow aborts should be to quarantine her away from the herd because there may be an underlying infectious cause such as salmonella.

The dead foetus and any surrounding contaminated straw should be removed immediately while any equipment or surfaces that have been affected should be cleaned and disinfected.

A cow which has aborted may have undergone significant physical trauma so once she is isolated she needs care and attention.

The cow must have plenty of fresh water and palatable food to help her recover.

Her condition should be checked three or four times a day. It may be good to check her temperature, if safe to do so, as high temperature could indicate an infection which could lead to sepsis.

Check that she has cleansed her placenta. Cows that have aborted may be more likely to fail to cleanse properly.

Retained placenta can increase the risk of endometritis – an infection of the uterus lining.

This must be dealt with quickly and a vet should be called in if the cow has not cleansed within 24 hours.

As well as the risks to the cow’s health from the acute infection, endometritis can affect her ability to get in-calf in the future.

Testing after an abortion

When to test
Investigating every abortion may be uneconomical, as there are likely to be unavoidable losses in every herd.

However, there is nothing wrong with testing every abortion, and the earlier infectious causes are detected, the better.

Once the incidence is at 3%, investigations must be carried out.

What to test
Successful testing depends on how much material can be provided to the laboratory – ideally, the full foetus and as much as possible of the placenta.

Chances of isolating a cause are improved if the placenta is included. A further positive move is to provide a blood sample from the dam.

Serological tests on the calf’s blood will take one to two weeks.The full investigation including microscopic examination of tissues will be completed in about three weeks.

Cost
Costs will vary across the country. SRUC Veterinary Services charges about £90 for the full investigation including blood testing the dam and disposal of foetal material.

There may be some additional vet costs depending on the individual case.