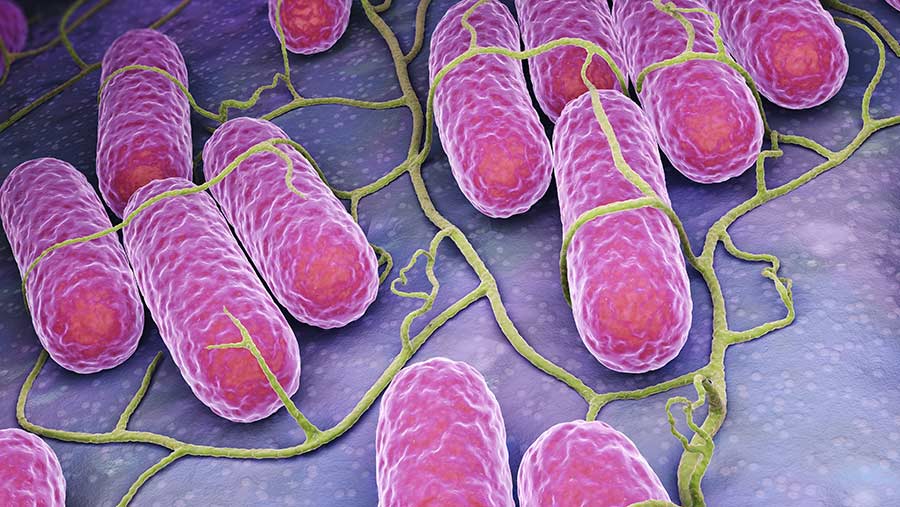 Although there is no routine salmonella monitoring in cattle in the UK, it is becoming an increasing problem in herds across the country.

An outbreak can have serious cost implications for the business, including high abortion rates, high calf mortality, reduced growth rates and depressed fertility in animals that do overcome the infection.

It is also highly zoonotic, as farm vet Harry Collas knows all too well, having been infected by salmonella bacteria himself after conducting a post-mortem on an infected cow.

Here, he explains how salmonella can infect a herd, which animals are at risk, what signs and symptoms to look for and how to prevent an outbreak.

See also: How to cut salmonella infections on pig farms

Salmonella bacteria can infect cattle, poultry, pigs and humans. They can be transferred directly from one infected animal to another, or through an infected animal shedding the organisms on to feed or water troughs, which are then ingested.

Infection has several clinical symptoms, and in extreme cases can cause mortality. There are more than 100 strains of salmonella, but there are two to be aware of for your herd.

Salmonella dublin (S dublin) is the most common type associated with abortion in cattle in the UK, and has a high carrier status.

This means that once infected, a large proportion of animals will fail to clear it, shedding later to further spread bacteria.

Salmonella typhimurium isn’t as common as S dublin, but is often linked to abortion following septicaemia and enteritis in freshly calved cows.

How is salmonella introduced to a herd?

There are several ways that salmonella is introduced on-farm. The first is the introduction of infected cattle.

Often this is through purchasing new livestock for the herd.

Another culprit is through wildlife such as rodents and birds, which carry the bacteria and transfer infection from farm to farm.

Which animals does it infect?

It’s important to note any cow is at risk of infection, but freshly calved cows and heifers, which have lower immunity, are at increased risk of any bacterial infection.

It is most common in calves, aged between two and six weeks. Often, they are infected following the introduction of the bacteria at market, for example, and spread the infection to other calves once brought on-farm.

What are the signs of infection?

Infected calves appear dull, depressed and don’t suckle. A main indicator is diarrhoea, which in neonatal calves is often a terminal sign.

For older calves, prolonged diarrhoea leads to dehydration and a gaunt appearance, and they can also suffer with pneumonia.

Any infected calves that do overcome these symptoms tend to have reduced growth rates and poor life-time performance.

In cows and heifers, the big warning sign of infection is abortion, particularly high rates throughout the herd. There’s also an increased risk of a retained placenta, leading to milk fever, long-term fertility issues and difficult future calvings.

How can salmonella outbreaks be prevented on-farm?

To protect the whole herd, vaccination of the breeding cows is key.

I’d recommend starting with calves, who can be vaccinated from three weeks of age, and then get into the routine of administering annual boosters, which can be administered three to four weeks pre-calving.

If buying-in cattle, ensure animals are being purchased from known salmonella-free herds. Any bought-in animals should be quarantined for at least four weeks, and then tested for infection before being introduced to the wider herd.

As with all disease outbreaks, isolate sick animals in dedicated isolation boxes and not calving boxes, which should be cleaned and disinfected between occupancies.

To prevent introduction from rodents and wildlife, ensure all feed stores are covered and can’t be accessed. Insist visitors have clean boots and vehicles and disinfect before entering and leaving the farm.

Beef producer Alec Millar has implemented a salmonella vaccination policy after he lost 100 calves during a devastating outbreak of the disease in 2018.

Mr Millar had run his 500-cow suckler herd at Balannan Farm in Ringford, Castle Douglas, Dumfries and Galloway as a closed herd for many years. But an increase in the farm’s land base from 400ha to 560ha meant buying in extra stock.

The additional suckler cows were sourced from a respected, nearby farm. However, it was run as a flying herd with a high turnover of animals and a greater exposure to disease, which meant the cows had built up some immunity. 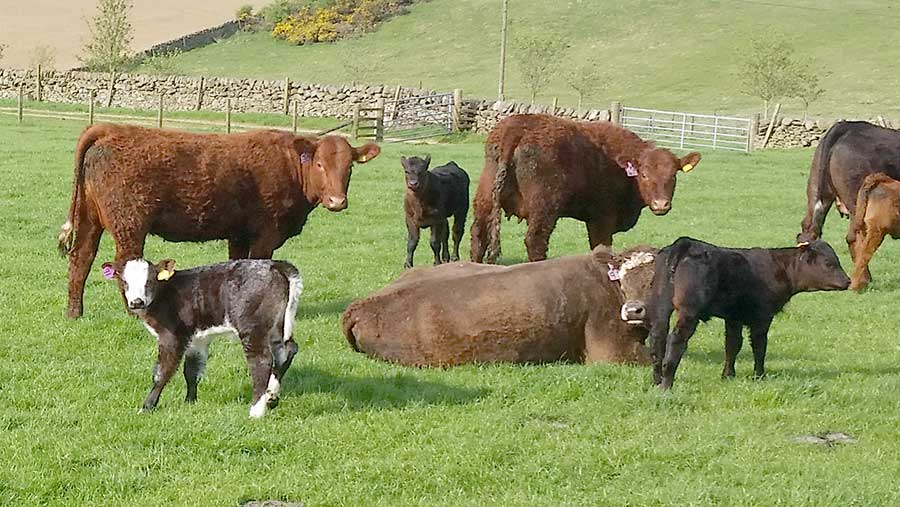 Despite health checks, the herd showed no disease symptoms. In contrast, Mr Millar’s closed herd was naïve to disease. “About 30 in-calf cows were introduced in January 2018 to calve along with the existing herd from March,” Mr Millar explains.

Initially, vets thought the deaths were due to viral pneumonia and the sudden increase was blamed on the atrocious spring weather in 2018.

Four calves died in one day alone and vets began a treatment of the antibiotic florfenicol at birth. Losses continued and lab investigations revealed calves had a wide range of infections including pneumonia, peritonitis, septic arthritis and a florfenicol resistant strain of Salmonella dublin.

Treatment was switched to penicillin but it came too late for many. In all, 20% of the calves died – 70 soon after calving and 30 more failed to recover over the winter. “It was both heartbreaking and a nightmare to lose that many animals.”

The decision to vaccinate using Bovivac S ahead of the 2019 calving was a no-brainer, Mr Millar says.

The spring calving passed without incident, but vets have warned that the herd will probably never be free from the disease.