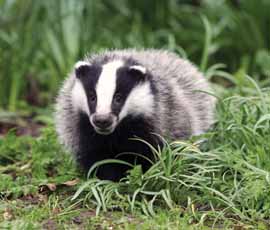 A badger conservation group has been carrying out door-to-door leaflet drops in a bid to get residents to lobby Natural England against the planned culling of badgers.

The leaflets, entitled “Stop the Shooting”, urge everyone in West Somerset to tell Natural England about how the culling will be “detrimental to livelihood, recreation and leisure activities”.

Produced by the Somerset Trust Badger Group, the leaflets called on opponents of the cull to make their views known to Natural England, which is assessing licence applications to cull badgers, by Thursday (23 February).

Trust chairman Adrian Coward said: “The badger killing is planned to start in August/September and last for six weeks, when free running badgers will be shot by high-powered rifles.

“These weapons can be lethal up to 1,000m and given the killing area has been confined as 288sq km, this means that very large areas of our countryside will be affected.

“Clearly shooting badgers after dusk over such a large area of land will have a significant detrimental impact on quiet enjoyment of the countryside and indeed create a serious safety issue should just one bullet go astray.

“Many hundreds of healthy badgers will be shot or wounded, including this year’s cubs.”

Mr Coward said he fully appreciated that cattle farmers must be helped to resolve the bovine tuberculosis problem.

But he added: “Killing badgers, even at the best reliable estimates (less than16%) will make little contribution to an overall solution, and indeed is very likely to make matters worse.”

An NFU source dismissed the claims that marksmen could endanger the people as “scaremongering on public safety”.

The source added: “Local people should not be worried as the culling will be carried out by professionally trained, competent marksmen.

“It will be regulated by highly trained people in close liaison with the police. Therefore, we do not believe that public safety will be affected.

“Vermin shooting, deer shooting, and local pheasant shooting goes on all the time and public safety is not compromised in any way.”

A spokesman for Natural England said: “We have had a series of comments via our Opportunity to Comment process which is due to close on Thursday (23 February).

“We will evaluate these comments and feed them back to the licence applicant for consideration to allow highlighted issues to be addressed in their full application.

“Individual responses will not be published, but an anonymous, summary overview of comments will be published on Natural England’s website in the coming months.”

DEFRA said bovine TB had seen the slaughter of 25,000 cattle in 2010 alone and would cost taxpayers around £1bn over the next decade unless it was dealt with.

• Find out more about the proposed badger cull on our dedicated page or have your say on our forum.