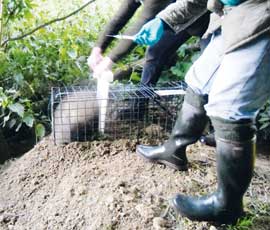 DEFRA is researching plans to give badgers contraception as part of fertility control measures designed to limit numbers and tackle bovine TB.

The plans are outlined in the government’s draft strategy for tackling bovine TB, which aims to make the UK TB-free in 25 years.

Under the plans, research is ongoing into three programmes of contraception for badgers, a significant reservoir of the disease.

Scientists are examining the potential for administering injectable contraceptives in both captive and free-living badgers.

However, because capturing and injecting badgers is expensive, developing an oral badger contraceptive is viewed as a key part of the research.

A DEFRA spokeswoman said: “We are testing the science and the application of both injectable and oral contraceptives in badgers. Contraceptive products are already used to control other wildlife species in other countries.

“We know that badgers and cattle spread TB, and no country has dealt with the disease without tackling infection in both wildlife and cattle. No one wants to cull badgers, but there is currently no other proven way to quickly and effectively reduce disease in TB hotspots.”