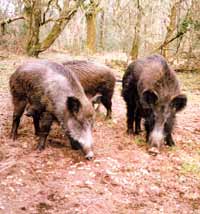 Tests on a 60kg female boar in Herefordshire revealed tissue lesions consistent with the disease.

The boar was trapped as part of a research project which was being carried about by the Food and Environment Research Agency. The animal died while under anaesthetic and was sent for post-mortem where the disease was identified.

A DEFRA spokesman said that the incident did not change the department’s risk assessment for the disease.

“The risk to domestic livestock, wild animals and public health from M bovis infection in wild boar remains low and this isolated incident does not alter our assessment.

“The main risk of human M bovis infection arising from wild boar is probably occupational, for those handling live infected animals or their carcasses in the field.”

The wild boar joins the growing list of non-bovine hosts for the disease.

The disease has been found in farmed wild boar twice while cases in cats, dogs, pigs and camelids, although still low, appear to be increasing.

Fewer than 1% of human TB cases are thought to be linked to bovine TB infections.