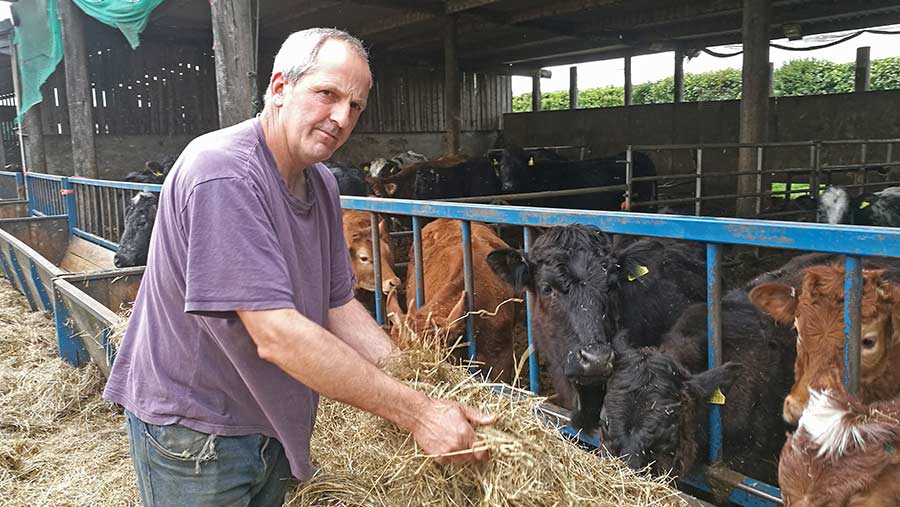 An Oxfordshire farming couple may be forced to sell their farm because of the crippling impact of bovine TB.

David and Samantha Hicks, who own Kingwood Farm in Wyfold, near Reading, say they are one of only three cattle farmers within an eight-mile radius whose herd is not down or been down with TB.

Neighbouring cattle farmers who have allowed their cattle to graze in the fields have suffered TB herd breakdowns, resulting in the loss of dozens of cows.

Farmers are linking the breakdowns to disease in wildlife such as badgers and deer.

Trying to avoid their own herd succumbing to TB and acting on advice from his vet, Mr Hicks now keeps his cattle housed most of the year.

However, the extreme weather events of 2018, such as the “Beast from the East” – a prolonged period of cold weather and snow – followed by the dry, hot summer have put pressure on forage stocks and the farm has not properly recovered.

The feed bill rose to £100,000 last year, which was unsustainable. “It was just a desert here,” said Mr Hicks.

“We have been farming all the cattle on 40 acres, costing a fortune buying in the feed,” added Mr Hicks.

“We have been trying to protect the cattle from TB by keeping them indoors. But the calves are not growing as they should be because they are kept in and they are not reaching their full potential.

The couple, who have four children, bought the 17ha farm in September 2014 at the end of their 15-year tenancy. At that time, their herd was under an annual TB testing regime, having previously been on four-year testing interval.

But the herd is now subject to routine six-monthly surveillance testing as part of Defra’s strategy to test regularly in areas on the edge of disease spread and its ambition to achieve official TB-free status.

Bank borrowing has increased and on top of the mortgage, the couple have a six-figure overdraft to repay.

To try to stay in business, the farmers have sold 200 of their 380 cattle and plan to reduce the herd to 40 cows in the next three months.

They are also proposing to diversify their business by turning the cowshed into rental units and one field into a fully enclosed dog-walking field.

But their bank is not willing to listen, Mr Hicks said.

“The bank has put the brakes on and said they want the borrowing repaid,” added Mr Hicks, whose family has farmed in the area for 100 years.

“We feel they have led us up the garden path, then shut the gate.”

To make matters worse, his John Deere tractor was destroyed in an accidental fire on 17 May. Although the machine was insured, he will have to add money to buy a similar model.

Mr Hicks said he had decided to speak out about his situation to reach out to the farming public for help. An online GoFundMe fundraising page has been set up in an effort to save the farm.

“TB has got to be dealt with. The situation is getting worse, there are fewer and fewer farmers,” he said.

“If the government would relax the protection on badgers and let farmers remove them – if only for two or three months – it would not wipe TB out, but it would make a drastic reduction in the incidence of TB in herds.

“Farmers are the last people to talk and share their feelings. We have got to try everything we can to survive. Too many farmers are exiting the industry – once we’re gone, we’re gone.”

Farm charity FCN (Farming Community Network) has been providing constant support to the Hicks family for the past three years.

Support from RABI (Royal Agricultural Benevolent Institution) and Forage Aid has been gratefully received, but due to the scale of the financial burden on the business, on this occasion it has been difficult to make any significant difference to the situation.

In some cases, as with Mr and Mrs Hicks, FCN is able to help further by calling on its numerous teams of current or former farmers throughout the country who, using their experience, can help to bring a different perspective to the situation.

This may involve looking at alternative strategies, or a supportive presence at meetings with external organisations, such as banks and regulatory authorities.

Once help has been asked for, FCN will continue its support until the person asking for it feels able to cope on their own once more.

The FCN Helpline is a free and confidential visiting service to farming people and families who are facing difficulties, including emotional issues. Phone: 03000 111 999 (7am-11pm)