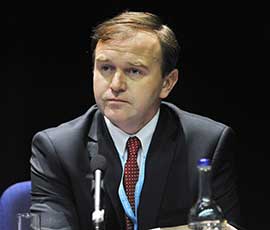 Farm minister and Tory MP George Eustice has defended the government’s badger cull policy amid claims from opposition MPs that the pilot culls have failed.

Speaking during a fiery cross-party parliamentary debate at Westminster on Wednesday (11 December), Mr Eustice reminded MPs that no country in the world has successfully eradicated TB without tackling the disease in wildlife.

“No one wants to kill badgers, least of all me. I recognise the sentiment many people feel towards these animals,” he said.

“If there were an easy answer to tackling this disease, we would have done it. But there are no easy answers when it comes to reversing the spread of bovine TB.

“And there are no examples in the world of a country that has successfully tackled TB without also dealing with the reservoir of the disease in the wildlife population.”

In Australia, he said a national eradication programme spanning almost three decades, which included a cull of feral water buffalo, enabled official freedom from bovine TB and an infection rate of less than 0.2% to be achieved in 1997.

In New Zealand, a comprehensive cull of bush-tailed possums left the country “on the verge of achieving TB-free status”.

Meanwhile, the Irish Republic has seen a 45% reduction in the number of cattle TB herd breakdowns since it introduced a targeted badger cull in 2000, the minister said.

Badger culling is also undertaken in Switzerland and France and deer and wild boar are being culled in the Baltic countries of Germany, Poland and Spain.

Mr Eustice said: “International experience clearly shows that to have a coherent strategy to tackle this disease, part of that strategy must be about tackling the disease in the wildlife population.”

Unlike the recent development of a vaccine for the Schmallenberg virus, which is “virtually 100% effective”, vaccination of animals against TB was “no easy answer”, the minister stressed.

“TB is not a simple virus. It is a complex bacterial disease and the bacteria actually reside inside the cell walls of a host, which make it incredibly difficult to get an effective vaccine,” said Mr Eustice.

“As a result, the current BCG vaccine, which does exist, only provides limited protection – about 60% of cases – and even then the level of protection given is variable.”

Nevertheless, he said the government has committed to invest a further £15.5m in vaccine deployment for both badgers and cattle during this spending review period.

“We are doing work on the DIVA test, but we must recognise that it’s probably going to take eight to 10 years to get a licensed vaccine for cattle,” he added.

“In January, we significantly expanded the area of the country that is subject to annual testing and we further tightened cattle movement controls, including the conditions that need to be met before TB breakdown herds can be restocked.

“Last month, we launched a risk-based trading scheme to encourage farmers to share details of the bovine TB history of cattle they sell and buyers to act on the information.”

Earlier, Labour MPs branded the government pilot badger culls a failure and called for an urgent review of the evidence.

Chris Williamson, Labour MP for Derby North, a trustee of the League Against Cruel Sports, accused DEFRA secretary Owen Paterson of being “deluded” and “gung-ho” over his attitude to the badger cull.

“They (marksmen) only managed to cull 39% of badgers in Gloucestershire when the target was 70%. It has been a catastrophic failure,” he said.

“I just wonder what on earth the secretary of state is doing. I’m just reminded of Einstein’s definition of madness – doing the same thing over and over again and expecting different results.”

Shadow farm minister Huw Irranca-Davies called for a parliamentary debate, which included Mr Paterson, followed by a full Commons vote before any decision by the government to roll out the culls more widely can be made.

Mr Paterson was not present at Wednesday’s debate to defend the criticisms directed against him and the government’s cull policy.