Farmers and vets trialling a new bovine TB test in cattle which is focusing on detecting infection missed in government testing say the early results are promising.

A number of cattle herds in England and Wales are involved in on-farm trials of the Enferplex Bovine TB antibody test, a blood test that can pick up infected animals missed by the official tuberculin skin test or gamma blood test.

It is part of a collaboration between Neil Watt, a veterinary pathologist and Gordon Harkiss, from MV Diagnostics; Alistair Hayton and Keith Cutler from SureFarm, a subsidiary of Synergy Farm Health; Enfer Scientific in Ireland; Brendan Griffin of Iechyd Da and Fenton Vets, in Haverfordwest, Wales; and farmers including south Wales dairy farmer Abi Reader.

Dr Watt says good progress is being made in Wales where the Welsh Enferplex Pilot is trialling the test in blood and milk in herds in 2020-21.

The pilot is using a combination of skin test data and the Enferplex test to identify and manage high-risk animals in these herds.

Defra policymakers have decided that the researchers can only test chronically infected herds with Enferplex.

MV Diagnostics and partners would like to test newly infected herds to prevent infection becoming established and posing a threat to other herds and wildlife.

Enferplex testing technology is also used for voluntary surveillance of bovine TB in camelids and it was used on Geronimo the alpaca, which faces being euthanised after testing positive twice. However, the test antigens and test conditions are different.

How the test works 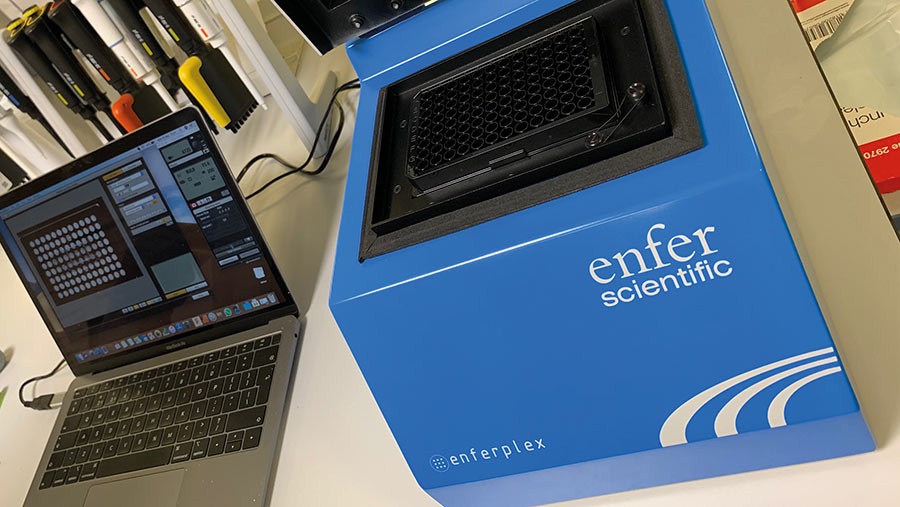 The Enferplex test has 11 separate antigens, or light spots, on a plate which detect an antibody.

Three risk ratings are used – yellow = low, amber = medium and red = high – based on the number of positive spots detected in a test to advise farmers whether or not they should cull an animal, and if so, when.

This is similar to the methodology used to manage Johnes disease.

Dr Watt has developed a computer program, called WNB, which he uses for more sensitive interpretations of the skin test to detect “near misses”.

“Whenever an animal is a W (Welsh severe inconclusive reactor), N (near miss), or a B (the bovine tuberculin injection site increases by 3mm or more), or any combination, we record that as an event,” he explains.

“Overall, we estimate the WNB test has about 98% specificity, but it is only about 25-40% sensitive at detecting animals which are missed by the conventional skin test but detected by Enferplex. This gives a handle for the farmer to start with and manage those animals out of the herd.”

Dr Watt and colleagues have been piloting the Enferplex test on three Welsh farms, including two in Pembrokeshire with repeat breakdowns since 2006 and one in Glamorgan – Abi Reader’s dairy farm (see case study) – which has suffered breakdowns more recently after being officially TB-free (OTF) for almost a decade.

The collaboration is focusing on detecting infection which was missed by the official tests – either skin, gamma, or the Idexx Elisa – which are all used by government departments.

The Enferplex test has a specificity of between 98.4 and 99.7% and a sensitivity of between 89.4 and 94.5%. This means that it can detect 94.5% of confirmed infected animals within a herd when used five-to-30 days after the skin test.

Dr Watt says the Welsh trial is supported by more than a decade of data and the results look promising. Between 2010 and 2012, 2,500 samples returned 23.4% Enferplex positive results.

Enferplex testing was carried out in a Welsh herd in 2012.

They tested 15 gamma and skin test negatives and 14 were positive with the Enferplex test. Four of these animals were culled for commercial reasons, but 10 later became skin or gamma reactors or WNBs between 2012 and 2014.

“When we have been looking at chronic herds in Wales, we have often found the number of Enferplex positives can be quite variable in the skin and gamma negative population in a herd, but often 25% of them can be Enferplex positive,” says Dr Watt.

“Our general experience is that once the animal tests positive in Enferplex, it doesn’t go negative.”

Researchers have also been trialling Enferplex on farms in England in the Edge Area, including Cumbria, Oxfordshire and Wiltshire.

Dr Watt says the results show that skin and gamma testing leave too many animals behind, leading to prolonged or recurring breakdowns. “Herds are being declared officially TB free, when they are still infected and are actually not TB free,” he notes.

For example, 283 cows in a dairy herd in Wiltshire, which has been under continuous TB restriction for more than 15 years, tested negative using the skin and gamma tests in August 2020.

Dr Watt and his colleagues tested all 283 cattle using the Enferplex test, 112 were positive and 171 negative. Following the receipt of the results, the farmer divided them into separate groups of positives and negatives.

At that point, the continuing issues contributed to the farmer choosing to cease dairying and selling the herd.

Meanwhile, a 500-cow dairy herd in Oxfordshire that was declared OTF suffered a “spectacular breakdown” last year after a sample taken in late 2018 found 37% Enferplex positives in the herd.

Dr Watt says the herd then suffered a “spectacular breakdown” in 2020 with 21 skin test reactors and 87 gamma reactors, many of which had been Enferplex positive when tested in 2018.

“The farmer is still under restrictions. He’s pretty much given up trying to eradicate TB. He thinks he is just going to have to live with it.”

Dr Watt is convinced that residual infection remains a key driver of bovine TB herd breakdowns. But he believes wildlife is an important factor too.

“Bovine TB is not coming down at the rate that it should if the government’s current testing strategy is working,” says Dr Watt.

“In our view, the sensitivity of the skin and gamma combination and the way it is used, is just too insensitive to detect all the infection they need in order to eradicate the disease and to prevent it spreading from herd to herd and putting local wildlife at risk.”

He adds: “Because these herds go officially TB-free they are then free to trade animals and transmit it on to other herds.

“Seventy per cent of the outbreaks in the lower risk TB area of Wales are considered by the Welsh government to be due to importing infected animals from either England or Wales. These animals must be coming from OTF herds.”

The Enferplex test gained approval from the World Organisation for Animal Health (OIE) to be used as a supplementary TB test for cattle in May 2019. However, the test remains unapproved for official, regular testing of bovines in the UK.

The Animal and Plant Health Agency (Apha) has placed major restrictions on its use. It is limited to herds already under long-term TB restriction, where gamma testing has already been used. It must be funded by farmers, and there is no compensation for reactors.

Further, regaining OTF status is more onerous as the presence of non-culled Enferplex positives will affect the farm’s status regardless of whether it has passed the statutory skin testing requirements.

SureFarm, the co-developers of Enferplex, is seeking permission from the UK government to remove the restrictions on its use in cattle to detect TB.

Dr Watt admits that he has a vested interest, but he knows that if Enferplex isn’t good enough it won’t sell. He would like to see Defra allocate more funding towards antibody testing than gamma testing and cattle vaccination.

The researchers would also like to set up an eradication trial using a combination of the skin and Enferplex tests, including WNB analysis, and movement controls in a geographically restricted area of Wales. But it would have to be funded, and Animal and Plant Health Agency protocols would have to be amended for the project to work. 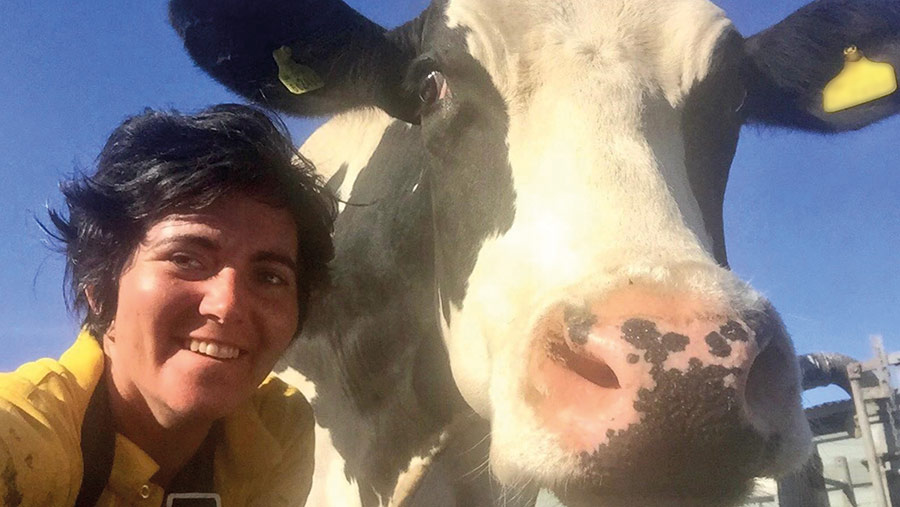 Dairy farmer Abi Reader has been using the Enferplex Bovine TB antibody test in her herd of 200 Holstein Friesian and Dairy Shorthorns in Glamorganshire.

Ms Reader went officially TB free (OTF) in 2020, before the herd broke down once more in February, since when she has lost 33 cows.

MV Diagnostics has looked at the histories of the animals that ended up as reactors in 2019 to see if they were WNB in the past. Some 13 or the 15 had been WNB; her first reactor in 2019 was WNB four times from 2015 onwards.

When researchers looked at the 21 gamma positives that Ms Reader had in May 2021, they found that 19 had been Enferplex positive before they were tested by gamma.

In fact, 14 were Enferplex positive in July 2020 when she went OTF. This was not known at the time because the samples had not been tested.

These infected animals could have been picked up almost a year before they were eventually identified by the gamma test.

Defra stance on the Enferplex test

The use of more TB diagnostic tests and how they could be employed is under consideration by Defra and devolved administrations. Defra has held discussions with MV Diagnostics and its partners about the Enferplex test, which gained OIE approval as a supplementary TB test for cattle in May 2019.

The test is not approved by Defra for statutory TB testing of cattle, although it can be used on a private basis in certain situations and subject to prior permission from the Animal and Plant Health Agency (Apha).

The government does not pay compensation for TB-positive animals identified through private Enferplex testing. Defra is considering the responses to a call for views published in January, and possible future research to assess the extent to which the Enferplex test “may be able to add value to our domestic bovine TB control programme and will update in due course”.

A Defra spokesman said: “Bovine TB presents a global challenge and the UK is harnessing its world-leading science to better its response – including through cattle vaccination and improved testing so that we can eradicate this insidious disease.”

Defra and the Scottish and Welsh governments are also evaluating the possibility of funding a small field trial run by Apha that would compare the performance of the skin,  gamma and Enferplex tests used simultaneously (“head to head”) in selected herds.