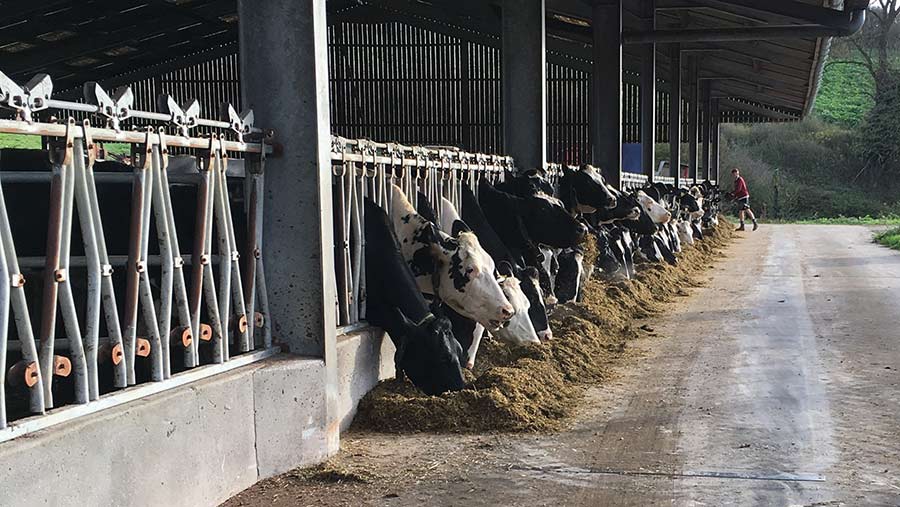 Gatcombe Farm near Seaton in Devon, run by Robert Reed and his family, is involved in a long-term project with experienced vet Dick Sibley, seeking to tackle TB by identifying and cutting off routes of infection within the herd.

The farm suffered a major setback recently after it lost its bovine TB-free status. After being clear of the disease for over a year, 14 dairy cattle failed the annual tuberculin skin test.

Mr Reed has vowed to carry on with the project, which is trialling alternative ways to eradicate bovine TB, and is backed by Queen guitarist Brian May and his Save Me Trust charity.

The project includes better slurry management and farm biosecurity, clamping down on possible cattle-to-cattle transmission of TB, as well as a system to identify cows “shedding” the disease and manage them specifically to prevent transmission.

Mr Sibley, director of West Ridge Veterinary Practice in Tiverton, has introduced a programme of enhanced testing to aid early detection of the disease in infected cows – an essential part of the strategy. 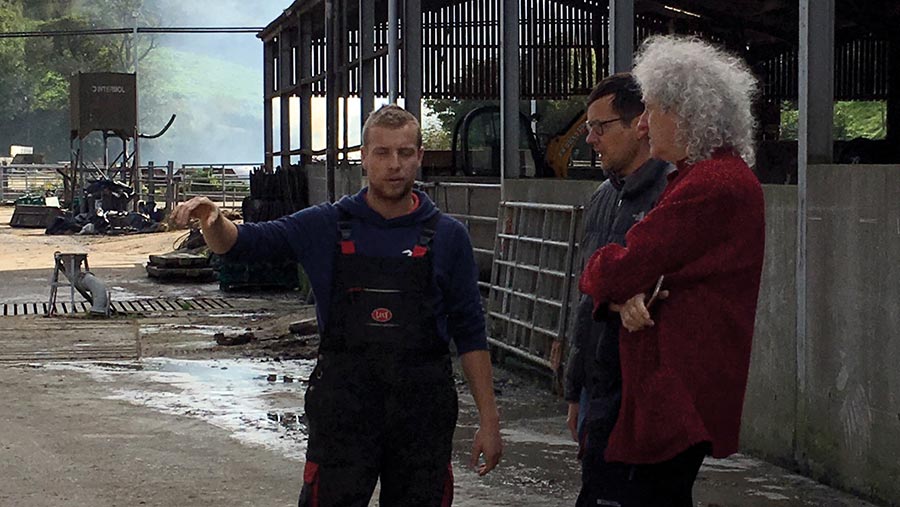 The use of Actiphage testing to measure the presence of live bacteria in the blood, the Elisa (blood) test and polymerase chain reaction (PCR) testing of dung samples have all been trialled. The farmers say the results have been positive.

Meanwhile, Queen guitarist Brian May and his Save Me Trust charity have funded badger vaccination on the farm after original investigations – including using cameras, badger surveys and badger testing – indicated that they were not the main problem, but they could not ignore the fact that they were infected.

Dick Sibley, who has spent about £20,000 of his own money on the project, wants to take a closer look at the effect of TB transmission to calves through milk.

The farm has submitted an application to Defra for £100,000 of funding to trial the use of the Idexx Elisa test, to see if it can detect bovine TB in cows’ milk. He is yet to receive a response, possibly because of the turmoil caused by Covid-19.

“We want to explore the possibility of testing cows’ milk for TB using the Elisa test in the same way we do for Johne’s disease,” he said.

“We have found that the Elisa test is a really good predictor of cows shedding Johne’s bacteria; 80% of cows that had a positive test went on to do so.

“And we know that with Johne’s there is a strong possibility that the mother will pass the disease to the daughter through the milk. It looks like that is what’s happening here with TB.

“We have been dealing with TB since the 1940s. This should have been trialled years ago, but hasn’t,” he added.

“If we could get £100,000 funding, it could go a long way towards solving a disease which costs the industry millions of pounds each year.”

The Idexx Elisa test is currently approved for diagnosis of TB in blood samples but not in milk.

But can Mr Sibley rule out the possibility that badgers were responsible for the latest breakdown?

“My hunch is that we will find this is the ‘Gatcombe bug’ which has passed on to the young animals, either through the cows or the milk, and they have got it by pseudo-vertical transmission [when the mother is weaning her offspring],” he said.

“If we do find that it is a bug from outside, we would have to look to see how the disease possibly got into the Gatcombe herd and where the biosecurity has broken down.

“In that situation, the suspicion would be the badger.”

The culture tests are currently with Apha laboratories and it may take several months to see the results.

The 93ha farm is home to an intensively managed dairy herd of mainly pure Holsteins which are milked using a Lely robotic milking system. The adult cows are housed indoors 24/7 and do not graze outdoors.

Since then, in line with regulations under the EU’s bovine TB eradication programme, which Defra must observe, the farm has been prevented from using enhanced testing because it had officially regained its TB-free status. 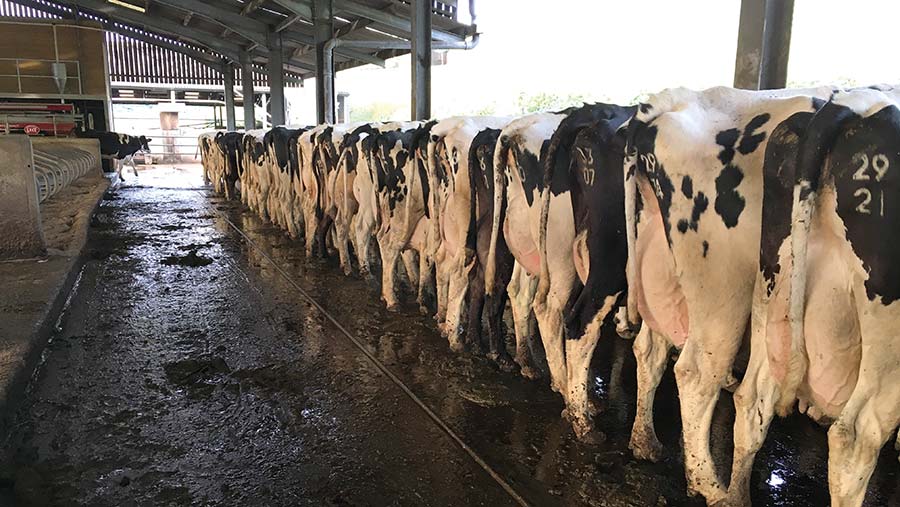 All the cattle which failed the annual tuberculin skin test would have grazed as youngstock on the farm. But Mr Reed says the farm rarely sees problem while they are youngstock and grazing. It is mainly when they are adults and are in the milking herd. They would have been grazing alongside badgers.

A further 30 out of the 400 cattle tested showed a mild reaction to the skin test, although none was classified as an ”inconclusive reactor” (IR).

These animals may be culled earlier or bred to beef, but ultimately, they will calve in a separate box.

Mr Reed says now the farm is no longer TB-free, it will immediately revert back to enhanced testing, provided it gets permission from officials from the Animal and Plant Health Agency (Apha).

“In one way it’s devastating to have another breakdown, but in another it’s not, because at least now we can go back to enhanced testing and learn more,” he told Farmers Weekly.

“We went clear initially two years ago and then we had a small hiccup with some beef cattle, so we went back down again. Officially, we had been free in the dairy for two years.

“But without enhanced testing, we haven’t been able to carry on and prove anything, knowing that we still had TB in the cows.”

Mr Reed believes the rules should be relaxed to allow farmers greater access to enhanced testing, especially once their herds go officially TB-free.

Enhanced testing, such as the Actiphage and polymerase chain reaction (PCR) methods, are not allowed in TB-free herds because they have not been validated or officially approved.

A Defra spokesman said: “Their results may be unreliable and difficult to interpret, meaning the tests may not offer any certainty about the animals’ true infection status.

“It is therefore not appropriate to use such tests in herds that are officially TB free (OTF), particularly when there are other validated, officially approved tests that owners of OTF cattle herds may already use on a private basis, such as the tuberculin skin test and the interferon gamma blood test.”

The spokesman added that Defra welcomed the work being done with non-validated tests for TB in cattle and hoped the results would contribute to the validation and official recognition of those tests.

“In order for such tests to be validated and officially approved, well designed studies will be required in a range of cattle herds to assess their diagnostic accuracy against the existing official TB diagnostic methods. This will help ensure we can have full confidence in their results.”

Farmers should be given greater control to manage TB and use modern science to tackle the disease in their own herds, rather than relying on an annual skin test which, he says, is “donkeys’ years old and is way out of date”.

“We rely on the skin test to drill down on the cows that have reacted with it,” says Mr Reed says.

“Once we go clear again, which may take a couple of years, we will seriously want to carry on with enhanced testing. It’s going to be a key part of it.”

Mr Reed says he and the team at Gatcombe have learned a great deal since they started the project. He believes there is “mileage” in all of the enhanced testing they have trialled.

In particular, he highlights the Elisa test, which costs about £4 a cow. “If you could test your whole herd for £1,000 a year, for farmers that’s a price worth paying if it allows you to go TB-free,” he says.

Some veterinary experts and farmers have questioned the validity of the Gatcombe trials, suggesting the participants are overlooking the importance and effectiveness of badger controls.

Cheshire vet Den Leonard suggested that Brian May was obsessed with preventing the culling of badgers rather than saving cattle.

“That’s his mission,” he said. “This whole Gatcombe project aims to suggest: ‘All we need is a new test and we do not need to do anything with badgers.’

“The dramatic reduction in cattle TB in cull zones, and the lack of repeat TB breakdowns in non-wildlife-infected areas of the UK, is evidence that new tests are not required, but badger population management is.”

“But if the aim is to eliminate TB from that farm [Gatcombe] and have a blind spot to the environmental burden brought in by badgers, then I think that is a mistake.”