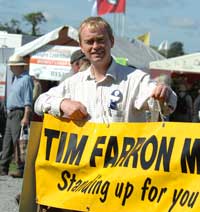 How important is farming to the economy?

Crucial. Farming is the backbone of the rural economy – which in itself is worth up to £347bn a year – but its potential is being wasted by a government whose economic motto is “what’s good for the city is good for the countryside”.

The UK is capable of being a huge net exporter of food but instead more and more farmers are being forced out of the industry by a combination of supermarket greed and cheap foreign competition.

To what extent should farmers be involved in devising farming policy?

Much more than they currently are.

The DEFRA establishment is well-meaning but utterly ill-informed and disconnected from rural Britain and farming in particular. New Labour prides itself on countless “stakeholder consultations” but on the big issues – such as TB – they’ve got it badly wrong.

It’s crazy that farmers are being dictated to by bureaucrats, especially when they’re the ones who are left to pick up the pieces from the government’s mistakes. If we want British farming to continue to be the best and most entrepreneurial in the world, then we must put farmers at the heart of policy decision making.

As Secretary of State I would deliberately place seconded farmers at the heart of DEFRA.

Will you sanction a badger cull to combat bovine TB?

I think now the time has come, irrespective of what ministers say, to introduce a science-based pilot cull.

This should take place in a targeted area of south-west England with hard boundaries, so that we can see the impact it would have both on badgers outside and inside the culling zone and the rates of bTB in cattle when regular culling takes place.

A badger cull, along with a programme of vaccines, regular testing and compulsory post-movement testing of cattle moving from high-risk areas to low-risk areas, would provide farmers with greater protection from the devastating effects of TB.

Will you press ahead with the establishment of a new independent body for animal health?

Not under current arrangements. The government’s only motivation for introducing the body is to legitimise a move to “cost sharing” so that farmers are forced to pick up the tab.

They wouldn’t ask communities affected by swine flu to pay to cover the NHS’s costs, so why an innocent farmer should have to pay because of the government’s negligence over animal diseases is beyond me. I’m concerned that unless farmers are given the opportunity to buy insurance for diseases such as foot-and-mouth, that even an independent body will leave farmers out in the cold.

How do you propose to keep retailer power in check? A supermarket ombudsman?

A supermarket ombudsman would be a step in the right direction but it won’t be enough to ensure that farmers get a fair price for their produce.

We need far stricter rules governing the relationship between supermarkets and producers, otherwise we will see more and more farmers leaving the industry. Instead of continuing Labour’s policy of letting supermarkets cut prices by cutting farmers profits, the Lib Dems would ensure farmers and consumers both get a fair price by creating a legally binding supermarket code, enforced by a proactive Independent Food Market Regulator.

Pretty much all of it – and we will need to.

By 2050, the world’s population is expected to reach 9bn and to keep pace we will require a 70% rise in food production. The government has only recently wised up to the importance of food security and has made great noises about talking to farmers about the issues affecting them. But in reality this battle was lost twelve years ago when Labour relegated food security to the sidelines.

Britain has to boost its food production to reduce the country’s future exposure to food shortages. But it’s also crucial that we’re less dependent on foreign imports if we’re to reverse the ever-increasing numbers of British farmers who are being forced to leave the industry.

How will you encourage more youngsters into farming?

Without hill farmers, much of the beautiful British countryside which we take for granted would very quickly become unkempt, inaccessible and poorly maintained.

Under our scheme, upland farmers would be rewarded for their efforts by encouraging them to diversify into more profitable areas of farming – like the untapped potential of anaerobic digestion – while at the same time passing on the skills, knowledge and understanding of hill farming to future generations. We would roll out the apprenticeships to all other areas of farming.

Should Single Payments be subject to a minimum size/ceiling?

Single payments are there to support farmers and allow them to produce food and cope with a market that is staggeringly unfair. But too many farmers who are dependent on single farm payments to keep a roof over their heads are forced to wait for months because there are thousands of incredibly small claims clogging up the system.

Bringing in a minimum payment of £300 would continue to provide support to farmers; but would also enable us to divert some of the resources to other parts of the industry – such as hill farmers – who really need help.

How should farmers be encouraged to promote wildlife?

It’s important that if we want farmers to promote wildlife we should reward them for their efforts. This means offering farmers incentives to adapt their farm structures and production methods to become more environmentally viable.

By encouraging more farmers to sign up to environmental stewardship schemes, we can protect farmland wildlife without resorting to the counterproductive stick of compulsory set-aside or undermining productivity.

Should UK farmers be allowed to GM crops?

If GM can make a contribution then we have a choice as a society about whether to make use of that technology. With that in mind there’s certainly a need for a fresh debate on GM, particularly if we’re to cope with food security issues raised by population growth and climate change. Farmers will increasingly need the freedom to choose modern and efficient high-yielding farming methods but it’s important that these methods are based on tried and tested science.

No one would underestimate the importance of regulating the use of pesticides; but the EU proposals go far beyond the risk based management system that has worked in the UK for years.

The government should draw up its own guidelines for farmers as to when they must inform local residents about spraying activities. However, it should be remembered that encouragement of good environmental practice is now built into the requirements for payments from the EU’s common agricultural policy.

Having said that, there should be special provisions for some public areas where there may be particular reasons for restricting or banning the use of pesticides for vegetation control.

If you win power, will you increase government funding into research and development in food production agriculture?

Labour’s under-investment in agricultural research and development has left a legacy of neglect for the countryside which could last well into the next decade.

A Liberal Democrat government would reverse this trend and provide the financial support necessary for the farming industry to meet the challenges of animal health, environmental responsibilities and food production.

Will your government have a Cabinet minister whose sole responsibility is agriculture?

It’s more important that we have a minister who understands agriculture and the problems facing farmers is in the cabinet (it might even be me!).

A Liberal Democrat government would, however, have an agriculture minister with the necessary expertise, background, and understanding of farming issues to provide real representation for Britain’s farmers.

What incentives will you offer farmers to tackle climate change?

The key is to make farmers aware of the “green” alternatives and to give them the support to implement them.

We’d deliver cuts in greenhouse emissions through better management of the countryside by encouraging wider adoption of good agricultural practice; investigating different ways of spreading manures on land to reduce methane emissions by investing in anaerobic digestion; and rewarding farmers for their role as stewards of the countryside by increasing financial support.

Will you repeal the ban on fox hunting?

I would vote to repeal the ban. It damages animal welfare and is impractical to enforce.

My personal view is that it hasn’t worked and I would vote to repeal it and replace it with broader animal welfare and licensing safeguards.

FARRON IN A MINUTE

What trait do you most admire about farmers?

Their passion for the industry and their determination in the face of huge adversity.

The fact they remain unappreciated and unrewarded by a market which ignores their role as environmental stewards of the countryside as well as food producers.

Heversham Head. It’s at the top of one of my regular fell runs and has a view of the entire constituency.

Are you, like former farm minister Margaret Beckett, a keen caravanner?

I’m more of a fell runner than a caravanner.

When was the last time you were on a farm?

What do you think of The Archers?

It’s a national institution and sometimes accurate on farming.