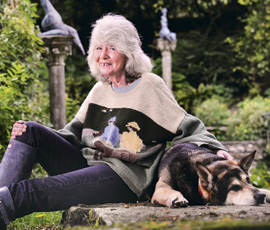 Novelist Jilly Cooper has backed a campaign to block the proposed culling of badgers in west Gloucestershire.

The author, who lives in the Cotswolds, has signed up to the Stroud 100 campaign, which opposes the government’s plans to cull badgers as part of a pilot scheme this autumn to tackle bovine tuberculosis.

Cooper is one of 82 landowners in the Stroud area of Gloucestershire who have declared their properties “no-cull zones”.

The author, who has 14 acres of land around her 14th century home in Bisley, told the This is Gloucestershire website: “We have masses of badger setts in our woods and have done a lot of research and passionately believe that the badgers are not giving TB to cows.

“I know it’s horrible for farmers, I do understand, but to cull the badgers is brutal.”

Stroud 100 has more than 1,200 acres dotted around the Stroud area signed up to its scheme, which has also been backed by Stroud Town Council, which said it would not allow any culling to take place on its land.

However, there is no suggestion that Stroud is included in the proposed site for culling in the county.

The group is trying to get as many landowners to sign up to its campaign in a bid to derail any culling in west Gloucestershire and make it logistically impossible.It aims to gain 100 signatories in the next few weeks and petition the government.

However, an NFU source said an area covering 1,200 acres would not be large enough to stop plans for a badger cull.

“The campaign would need to cover around 70% of the 330sq km area of the proposed site, whereas we have access to around 290sq km.”

The government announced plans for two pilot badger culls, to be carried out over a six-week period later this year in west Somerset and west Gloucestershire.

The pilot culls, scheduled to begin after the Olympics, will aim to test whether the controlled shooting of badgers is humane, effective and safe.

If successful, they could pave the way for the creation of a further 10 cull areas in England in 2013.

Join the conversation on our badger cull forum