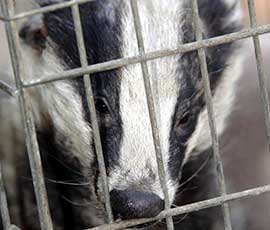 Farm leaders have called on DEFRA to look more urgently at gassing badgers as an alternative method of culling to fight bovine TB.

Jan Rowe, director of Gloscon, one of the pilot culling companies, said many farmers believe DEFRA has been “very slow” to undertake new work into methods of gassing badgers, which could provide an alternative to shooting.

The gassing of badgers using cyanide was banned in this country in 1982 as it was considered inhumane.

However, the use of carbon monoxide gas has since been identified as the best possible fumigant for badgers in their setts in terms of feasibility and humaneness.

Mr Rowe said gassing badgers offered the possibility of a more targeted culling method that the public may consider more acceptable than shooting, provided it can be shown to be humane.

“If we could gas infected badgers in their setts it would have the advantage of removing complete social groups which reduces the risk of perturbation,” he added.

“Also, it would be much more targeted, provided you can find a way of determining those setts that are infected. It would be more effective and economical to do (than shooting).”

Gassing could be used to remove setts identified as “high risk” in any one season, instead of more widespread culling, he suggested.

“You could remove the more infected setts at any one time. That would be much more acceptable to the public.”

But he said scientists faced two significant obstacles to overcome before the method could be employed – the ability to detect setts with active TB and the product licensing of the gas.

“These are two areas we want DEFRA to work on urgently and we do not feel they are,” said Mr Harper.

“The PCR test has been talked about for years, but we really are not sure how far forward we are with it. There seems to be no appetite to test any form of gas.”

Mr Harper said high-expansion foam is used in poultry as an effective culling method, which could be tested on badgers.

“If it works in the poultry industry in a foam, it would cull badgers,” he said. “But there has to be trial work done and we would need to work out how we would do it on badgers.”

However, NFU president Peter Kendall said DEFRA secretary Owen Paterson was “pushing very hard” at alternative methods of culling to make sure that farmers had “every tool in the box available to deliver a result”.

A DEFRA spokeswomman said: “We have commissioned research into the use of gas as a potential culling method as part of out 25-year TB eradication strategy which sets out plans for more sophisticated testing, developing badger contraception and badger and cattle vaccines, tighter cattle movement controls and, badger culling.”