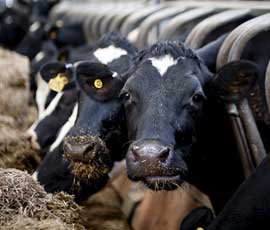 Up to a third of cattle infected with bovine tuberculosis may be going undetected because of the spread of the liver fluke parasite.

Scientists say increased cases of the parasite in UK cattle could explain the failure of the current TB eradication programme and efforts to stop the disease from spreading.

Latest research, published in Nature Communications journal, furthers findings from 2006 which said that cows infected with TB and fluke were less likely to show a positive in a routine TB test.

Tests found infection with fluke Fasciola hepatica reduced a cow’s reaction to the skin test by ‘turning down’ its immune system. A TB test works by testing a cow’s immune system response to the harmless part of the TB bacteria.

But the updated research, carried out by scientists from the University of Liverpool shows the relationship between the parasite and the disease had been underestimated.

Using a computer model, the scientists looked at the relationship across the UK between levels of liver fluke and the rates of TB diagnosis.

Relating disease incidence to environmental conditions such as temperature and rainfall, they mapped where in England and Wales the disease was most likely to occur.

The results showed that, in the absence of liver fluke, the probability of farms being diagnosed with TB increased substantially, particularly in the southwest, Wales, Derbyshire, Lancashire and Cumbria.

“Using our model, we estimate that in the absence of fluke, the detected prevalence of TB would increase from 35.5% to 53%,” the researchers said.

“This equates to an under-ascertainment rate in our study farms of about one-third.”

One of the researchers, Diana Williams of Liverpool University, said fluke had become more common in the UK over the past 15 years, which coincided in the tripling in the number of herds infected with TB.

She said the parasite may be thriving because of climate change, but also because of agri-environment schemes that encourage farmers to maintain ponds, lakes and marshes to support wildlife. The fluke parasite spends part of its life cycle in snails, which thrive in warm, wet conditions.

Christl Donnelly, a former member of a government advisory panel on TB, said that if confirmed, the findings could lead to useful policy changes.

“It’s potentially really interesting – anything that can explain where test sensitivity is going wrong is potentially very useful in finding out where the cattle test might be doing less well,” she told the BBC.

“I think it would definitely be worth following up and asking whether there’s any effect of liver fluke on gamma-interferon and if the answer is ‘no’, maybe there should be more use of gamma interferon in those areas.”

However a DEFRA spokesman played down the significance of the findings.

“The absence of positive cases of bovine TB in some areas coinciding with large amounts of liver fluke cannot be used to claim liver fluke is hiding cases,” he said.

“Cattle carcasses are inspected in abattoirs and we would see evidence of TB in the slaughtered animals if this was the case.”