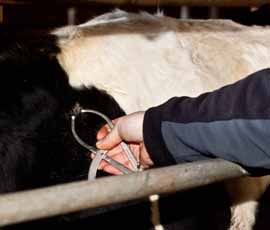 Farmers in England and Wales have been left in the dark by the government over new TB stocking rules.

New regulation governing livestock movements under TB restrictions were introduced at the end of January by the Animal Health Veterinary Laboratory Agency (AHVLA). However, the NFU were only informed of the changes last Friday by post (3 February).

The changes mean the licensing of cattle on to Officially TB Free Withdrawn (OTFW) premises prior to completion of the first Short Interval Test (taken 60 days after the reactor is removed) is no longer allowed.

The union has reacted angrily at the lack of communication, expressing concern that rules, which could potentially have a serious impact on farm businesses, were being changed overnight.

Speaking to Farmers Weekly, John Royle, NFU chief farm policy advisor said the union was “hacked off” with the lack of communication.

“The impact on individual farms could be significant, yet AHVLA has failed to communicate the changes sufficiently. We are now communicating the changes and feel we are essentially doing their job for them,” he said.

NFU president Peter Kendall also expressed “grave concerns” that farmers had been left in the dark over the new rules and how they were to be implemented.

Mr Royle believed the impact for new breakdown units would be “major”, but said the impact on the country as a whole would be small. “This could really affect farmers loosing milkers and wishing to replace them, as they now can’t. It could also be a real problem for those buying and selling stores,” he said.

However, some exceptions may apply, for example, the replacement of suckler calves for welfare reasons will still be considered on a case by case basis prior to the completion of the first SIT, as will the purchase of breeding bulls.

Commenting on the situation, the AHVLA said it planned to meet with the NFU in the coming week to discuss and address their concerns and consider the best way to communicate messages in the future.

What the new changes mean:

Does this affect ongoing breakdowns?

All herds that have an Officially TB Free Status Withdrawn breakdown will now have to wait until they have completed their first Short Interval Test (SIT) after 60 days of the reactor animal leaving the farm or being suitably isolated.

Following a SIT where reactors or inconclusive reactors are found, cattle can be moved on to a holding after a satisfactory veterinary risk assessment has been carried out and it can be proved that animals moving on to holdings will be kept isolated. This will ensure that there is no increase in the disease transmission risk.

Prior to the changes, in exceptional circumstances and following satisfactory veterinary risk assessment, the movement of animals on to an OTFW premises before completion of the first SIT was allowed, where it was possible to isolate purchased animals. This can no longer happen.

Are there any exceptions?

The replacement of suckler calves for welfare reasons will still be considered on a case by case basis prior to the completion of the first SIT, as will the purchase of replacement breeding bulls, but only where there are no options for artificial insemination.

How to I regain an Officially TB Free status?

In order to regain Officially TB free status it is necessary for herds with OTFW status to test clear at two consecutive short interval tests at no less than 60 day intervals.

Why have these changes been implemented?

These changes occur following recommendations by the EU Food and Veterinary Office (FVO) following a recent audit of TB controls in England. It is felt that herds that have disease confirmed (OTFW) pose a greater risk of disease transmission and therefore further assessment of the disease levels in the herd must be gained.

Why could we not oppose these changes?

As well as representing a risk from an animal welfare perspective the taxpayer is liable for the payment of compensation for animals removed as TB reactors, to increase the number of animals at risk from disease is an unnecessary risk for the taxpayer to be required to bear. Following the completion of the first SIT it is possible to have greater confidence that infection has been removed from the herd.

For more on bovine TB go to to our dedicated pages