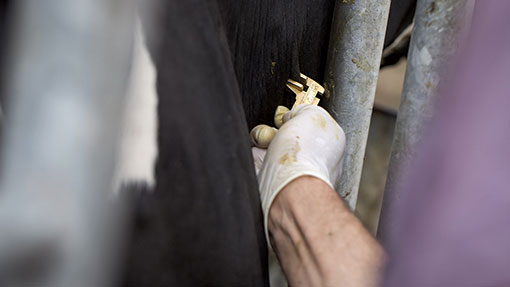 The NFU has blasted the government after it took six weeks to inform neighbouring farms about a rare TB outbreak on a livestock holding in Hertfordshire.

An investigation is under way to trace the origin of the TB breakdown, which was confirmed in the county at the end of August.

It is understood that 20 reactors were slaughtered after they tested positive for TB in a routine test.

The farmer is “devastated” by the loss, which included valuable pedigree cattle.

NFU Hertfordshire county representative Will Dickinson said: “The animals are very expensive and the farmer will only get back the statutory minimum compensation payment for his loss.

“He’s devastated. His pension has gone out of the window.”

According to Mr Dickinson, blood tests were carried out on 27 August, which confirmed the disease in the herd. Some cows were culled straightaway after they were found to have TB lesions.

But Mr Dickinson said the government’s Animal and Plant Health Agency (Apha) took six weeks to officially inform farmers within a 3km radius of the holding about the outbreak.

He said one livestock farmer in particular, whose cows graze in fields alongside the farm, was furious about the government’s handling of the situation.

“It shouldn’t have taken six weeks to warn farmers about the test results,” added Mr Dickinson.

“Luckily, in this instance, the farmer’s behaviour was exemplary and he told his neighbours about the outbreak straightaway.

“But in another case, they could well not have been given the information. Hertfordshire could have been a county full of TB as a result of government inaction.”

Mr Dickinson said the farmer was baffled about how TB got into his herd. He operates a closed herd. One explanation is that his animals may have contracted the disease while they were taken to livestock shows.

Hertfordshire is based in a four-yearly testing area and is categorised by Defra as low risk for bovine TB.

According to Defra statistics, since January 2008 there have been two confirmed cases of bovine TB in Hertfordshire – one in 2010, where 20 animals were slaughtered, and another in the south of the county last year, were 21 animals were culled.

An Apha spokesman said identifying the holdings eligible for testing in a 3km radial testing zone around the breakdown premises “can take several weeks”.

He explained: “Apha needs to identify the size of the zone based on the farmer’s records and the locations where he keeps cattle under that holding number, including any complications introduced by linked premises.”