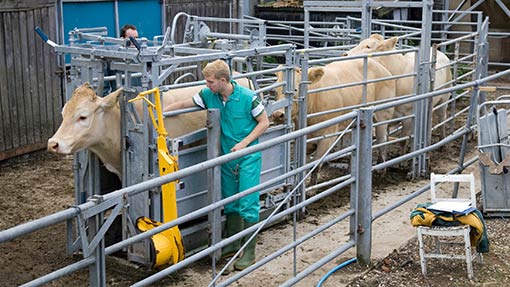 The total number of cattle slaughtered during the 12 months was 32,620, according to the latest data released by the department on 12 March. But this marks a decline of about 14% on the previous year, when 37,734 cattle were culled.

However, a DEFRA spokeswoman said the rate of herd breakdowns in previously TB-free cattle herds remained unacceptably high at 4.5%. “It means the rate has been at a high level of above 4% for a decade and shows the steady toll of bovine TB on British cattle herds.

Farm minister George Eustice added: “Our efforts to control bovine TB have kept outbreaks steady over the past 10 years, but we are still nowhere near an acceptable position. Almost 90 cattle are being slaughtered each day due to bovine TB and we cannot allow that to continue.

“Today’s figures are another reminder that we need to do all in our power to bear down on a disease that is costing taxpayers millions each year and taking a terrible economic and emotional toll on our farmers.”

DEFRA consulted on a 25-year TB eradication strategy last summer, which included proposals for disease surveillance, pre- and post-movement cattle testing, removal of cattle exposed to TB and wildlife controls including badger culling and vaccination trials. The final strategy will be published later this spring.

The strategy will also focus on the development of new techniques such as badger and cattle vaccines and diagnostic tests that could offer ways of tackling the disease in the future.

See also: Analysis: Where next for the badger cull