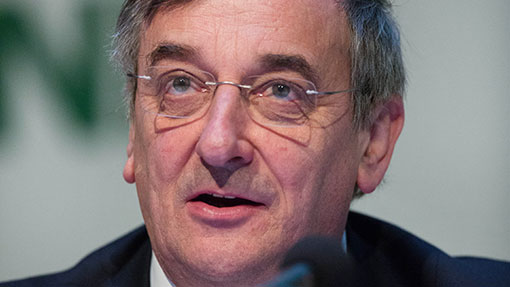 Farmers whose businesses are devastated by bovine TB are feeling “hugely frustrated and angry” about not being able to tackle the reservoir of disease in wildlife, the president of the NFU has said.

Speaking during a visit to a TB-hit dairy farm in Dorset on Wednesday (9 April), Meurig Raymond described the government’s decision not to roll out badger culling to more counties as a “bitter disappointment”.

Farmers were continuing to bear the brunt of regulations and tighter cattle controls, but these were “pointless” without tackling the disease in badgers, he added.

Mr Raymond said he was “very concerned” about the conclusions drawn in the Independent Expert Panel’s (IEP) report, which raised questions about the humanness of shooting badgers, the method used in last year’s pilot badger culls in Somerset and Gloucestershire.

“It has skewed the government’s decision on the wider use of the badger control policy,” he added.

“While the IEP did outline accurately the challenges faced by those delivering the badger cull pilots, it has also made many assumptions based on anecdote, unpublished work which hasn’t been peer reviewed, or selective use of evidence.

“Its conclusions on humaneness and effectiveness are simply not reflected in the experiences of those people on the ground.”

Mr Raymond said “well-trained, experienced contractors” carried out the pilot culls. They required huge levels of commitment in the face of “unacceptable intimidation and harassment by protesters”.

He added: “We remain confident that these pilots will help to deliver a reduction of TB in cattle as planned. And it is vital they are allowed to be successfully completed so they can deliver the expected reductions in TB in cattle.”

Mr Raymond was speaking during a visit to the Dorset dairy farm of Paul Gould, who has had 36 cattle react to a routine TB test, including 31 in-calf heifers.

This represents nearly a quarter of his 160-cow British Friesian herd, which will have to be slaughtered as part of TB controls.

“This TB breakdown only goes to emphasise the importance of controlling the reservoir of TB in wildlife,” said Mr Raymond.

“The decision not to extend the pilot culls is a bitter disappoint to farmers like Paul. Without being able to control the wildlife that is spreading disease to their cattle, they are rightly hugely frustrated and angry. It has a strangle-hold on their business.”

In the coming weeks, Mr Raymond plans to visit Ireland, which has a badger cull in place, to see for himself how the country has achieved success in reducing badger numbers and TB.