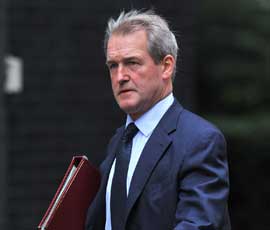 DEFRA secretary Owen Paterson has insisted the government will stand by the badger cull while accusing the previous Labour administration of “doing nothing” to tackle bovine TB.

Speaking at a fringe meeting at the Conservative Party conference on Monday (30 September), Mr Paterson outlined the progress the Tories were making to overcome what he called “13 years of damaging and woefully ignorant indifference the countryside suffered under Labour”.

He described bovine TB as the “most pressing animal health problem in the UK” and said the importance for tackling the disease for cattle farmers, their families and communities “cannot be overstated”.

“I very much regret that as this issue has become politicised our grip on this disease has weakened,” added the minister.

“Bovine TB has now spread extensively through the west of England and Wales. The number of new cases is doubling every nine years.

“In the last decade we have slaughtered 305,000 cattle across Great Britain. In 2012 in England alone, TB led to the slaughter of 28,000 cattle at a cost to the taxpayer of nearly £100m. It is estimated that this will rise to £1bn over the next decade if the disease is left unchecked.

“The task of managing bovine TB and bringing it under control is difficult and complex. The government is committed to using all of the tools at its disposal and continuing to develop new ones as a package of measures to tackle the disease.”

Pilot badger culls are under way in TB hotspots of west Somerset and west Gloucestershire. But Mr Paterson said culling was just one element of the government’s broader strategy to eradicate bovine TB.

“We will continue to strengthen cattle movement controls, increase our surveillance testing regime and invest in research into badger and cattle vaccines,” he added.

He paid tribute to the local farmers and landowners involved in the pilots who were faced with intimidation by a “small minority who were determined to stop this disease control policy”.

“However difficult the choices ahead, we must not repeat Labour’s failed policy of doing nothing,” said Mr Paterson. “A policy they continue to promulgate today.”

Other countries, such as Australia, New Zealand and Ireland have seen TB infection levels fall after tackling the disease in wildlife, he said.

For example, the Republic of Ireland, where badgers are now culled, has seen TB infection levels fall by more than 45% since 2000 and the Irish were slaughtering “close to half the cattle they needed to 10 years ago”.

However, between 1998 and 2010, the number of herd breakdowns in the UK has tripled and the number of cattle slaughtered has increased six-fold.

“To be absolutely clear: this government will not walk away from the tough decisions that are required to eradicate this devastating disease,” said the minister.

Mr Paterson said the UK must reduce the amount of food imported that could be produced here – around 22%.

To address this, he is hosting a series of meetings with farmers, manufacturers and retailers to make it easier for businesses to grow in the UK market.

In the last year, Mr Paterson has led trade missions to China, Russia and the United States to open up British food and drink exports to overseas markets. While farm minister David Heath has been to Dubai and Thailand.

Last year, UK food and drink exports – our largest manufacturing sector – were worth £18.2bn. The wider sector supports 3.7m jobs and contributes nearly £100bn a year to the UK economy.

The current public investment of £1.2bn means that 90% of the UK should have superfast coverage by early 2016, said Mr Paterson. This programme will benefit over four million rural homes and businesses. Across the country, 100,000 properties were being connected every week, he added.

“I believe that nothing will have a more spectacular impact on the rural economy than the roll-out of superfast broadband. For the first time, we have a technology that can truly bridge the gap between urban and rural.”