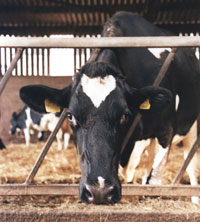 A Cardiganshire family that has lost 555 cattle to bovine tuberculosis since mid-December is calling for an independent inquiry into the handling of the outbreak.

He said: “We have always encouraged Daioni customers to use the many footpaths crossing our land, but while I don’t want to scaremonger, this big outbreak could have far-reaching implications for the health of people enjoying the countryside.”

Mr Harris has also issued an open invitation for all wildlife groups to visit the farm for a frank debate on how TB should be combated.

“The present policy’s bias against cattle is immoral and could compromise human health. As we have seen in our case, where post-mortem evidence showed many inconclusive reactors actually had TB lesions, the tuberculin test used is wildly inaccurate.”

On Monday vets began blood testing the last 88 cows at Ffosyficer near Cenarth that might have had direct contact with infected animals, and over 300 cattle that had no contact.

Mr Harris is also angry about decisions made by Welsh Assembly vets. Originally the plan was to slaughter 225 reactors and 110 inconclusive reactors and all were valued. But after the first loads – including 46 which had inconclusive results – were killed he was told that no inconclusive cattle should go for slaughter. 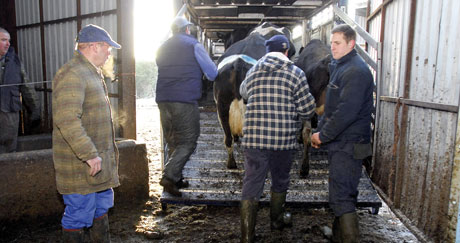 “But 25% of those that had already gone had lesions, including two with udder lesions. Incomprehensibly, it took a day for the assembly to change its mind and agree that all inconclusives must be killed.

“Though I have not had full post-mortem results from the last 64 IRs slaughtered, I have been told that a significant number had TB lesions. This makes me wonder just how many infected animals are being missed by skin tests.”

First results from the latest tests on the remaining animals at Ffosyficer, and on 250 cattle on the family’s other farm, will not be heard until next week.

Despite spending many hours discussing restocking issues with animal health officers, Mr Harris and his son Tom are still undecided about the best route.

They were prepared not to keep cattle on the main farm for two years, but the cost of switching to arable would be high. “Elin Jones, our rural affairs minister, has agreed to meet me and, though I agree with what she is doing to tackle TB in Wales, I will tell her we need fast action and a public inquiry into the current system, which is a mess.”