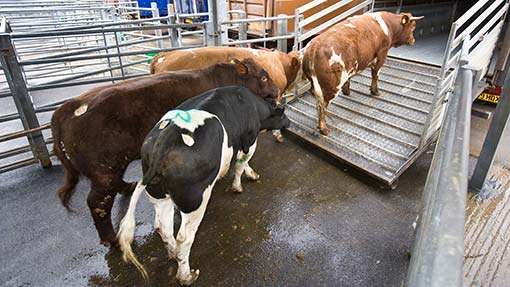 Defra has proposed tougher controls on cattle movements to curb bovine TB despite new figures that show the disease has fallen to a 10-year low.

Monthly statistics released by the department for March 2014 show the number of outbreaks discovered through testing was about 3.25%.

This is the lowest rate since 2004 and follows a similarly low rate in February of 3.5%.

“The statistics show the controls in our bovine TB eradication strategy are beginning to make a difference,” Mr Eustice said.

“However, we cannot become complacent. The effect of bovine TB on our cattle farmers, their families and their communities cannot be overstated. That is why we must do everything we can to reach our aim of making the whole of England TB free,” he added.

The newly-proposed controls are set out in a consultation document and include the removal of pre-movement exemptions for cattle moving between several holdings under the same farm ownership, known as sole occupancy authorities.

This will remove the possibility of some cattle keepers in the high-risk and edge areas moving their animals over long distances without any TB testing. There will still be the ability to move cattle between areas of owned land within 10 miles.

Penalties for breaking the rules could also get stricter.

Since 1 January 2014, owners of herds who fail to complete their TB surveillance test on time have risked seeing their CAP payment reduced, even if the test was delayed by only one day.

But under the consultation, Defra sets out its intention to extend this approach to include TB tests in restricted herds.

“Our current approach has already helped achieve a 60% reduction in late TB surveillance tests this year. As is the case now, farmers will not be penalised where there are good reasons for missing a TB testing deadline,” Mr Eustice said.

In addition to the proposals, Defra has confirmed the partial derestriction of TB-breakdown holdings will not be allowed from 1 October 2014.

A Defra statement said this meant that from that date, movement restrictions would apply to all cattle on a farm until all the animals had achieved officially TB-free status.

“There are a number of options available to cattle keepers to help manage the effects of this change,” the statement added.

“For example, cattle farmers with separate cattle management groups could consider registering some cattle under a separate county parish holding so that if TB is found in just one group, the number of cattle subject to movement restrictions could be limited,” it said.