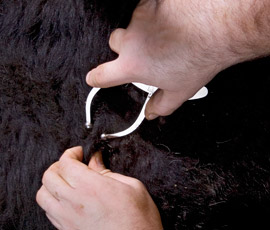 DEFRA has announced plans to carry out field trials for a cattle vaccine and associated DIVA test in the UK, from as early as 2014.

It is seeking a partner to carry out the trials as part of government plans to eradicate bovine TB.

DEFRA placed an advertisement in the journal Veterinary Record this week which says governments in Scotland, Wales and Northern Ireland have developed a Bacillus Calmette-Guérin (BCG) vaccine against bovine TB.

An accompanying diagnostic tool to differentiate infected from vaccinated animals, known as a “DIVA test”, is also ready, the advert stated.

The advert said: “By agreement with the European Commission, a delivery partner is sought to conduct robust scientific field trials of the vaccine and accompanying DIVA test.

“AHVLA are advertising for people to work with in developing the cattle vaccine field trials that are one of the necessary steps set out by the European Commission in their timetable. The trial is needed to prove that the cattle vaccine being developed is effective in large-scale field conditions.”
DEFRA spokesman

“The field trials will need to be carried out in accordance with good clinical practice (veterinary) and animal test certificate guidelines.”

Work is under way to define the scope and scale of these trials, which DEFRA expects to begin from 2014 and take place mainly in England and Wales, over a period of two to five years.

Draft protocols for the trial would be made available before they begin.

The trials will be expected to:

A DEFRA spokesman said: “AHVLA are advertising for people to work with in developing the cattle vaccine field trials that are one of the necessary steps set out by the European Commission in their timetable.

“The trial is needed to prove that the cattle vaccine being developed is effective in large-scale field conditions.”

Two supplier days – one in London on 24 September and another in Cardiff on 30 September – are being held to “provide a forum for potential suppliers of all sizes”.

Any organisations wishing to attend should register their interest by emailing mick.dunham@defra.gsi.gov.uk on or before 19 September.

Vaccinating cattle against TB is prohibited under EU law. This is because BCG can interfere with the tuberculin skin test and give “false positives”, making it impossible to distinguish between sick and healthy cows.

The European Commission has suggested a cattle vaccine and DIVA test will not be commercially avaliable before 2023.

Field trials of a cattle vaccine in Ethiopia and New Zealand have shown it can protect around 60% of cattle from TB infection.

Professor Glyn Hewinson, Animal Health and Veterinary Laboratories Agency chief scientist, told Farmers Weekly a cattle vaccine would be “no magic wand” to wipe out bovine TB in this country.

However, used in conjunction with existing controls measures, it could offer farmers an important tool to help prevent TB infection in their herds.

DEFRA secretary Owen Paterson said a badger cull, which is under way in the South West, is necessary while the wait for a workable cattle vaccine continues.