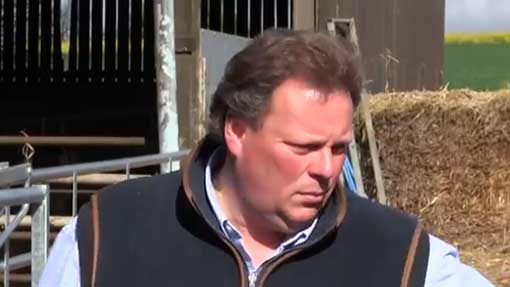 A harrowing video that shows bovine TB-infected cattle being shot dead on a Gloucestershire farm has gone viral on YouTube.

In the video, recorded by the NFU, beef farmer David Barton explains how bovine TB has devastated his cattle at Manor Farm, Middle Duntisbourne.

The 46-year-old farmer is pictured turning away his head and closing his eyes in horror as four of his herd, including his beloved breeding bull Ernie, are killed.

The animals tested positive for bovine TB during a routine six-monthly test of 160 head of cattle at the farm two weeks ago.

But because they had only recently been given worming medication, they could not be taken to the slaughterhouse.

Mr Barton later tells the camera his “hands are tied” and he has decided to leave the beef industry.

“Quite frankly, I’ve had enough of it and I’m getting out of beef because of it, because I can’t emotionally carry on doing this,” he said.

“You can’t live with this [bovine TB]. It’s ruining businesses. My whole family are distraught about it.

“It’s only two years since we were doing this before. It’s hopeless. I have a situation where my hands are tied. What the bloody hell do I do?”

The most heart-rending part of the video shows Mr Barton giving his 11-year-old breeding bull Ernie a final hug before he walks away in distress as the animal is shot dead by a contractor.

He later writes in his blog how he was feeling during this traumatic moment .

“I feel sick to the bottom of my stomach and I can hardly make my legs take me to Ernie,” he writes.

“The gentle giant. Loved by all. He trusts me and I know I am about to betray that trust. I put his barley down for his usual feed. But this is not usual. The marksman steps up and the bang echoes out. The finality is overbearing. I have to leave.

“The only consolation (as we always have to find a positive?) is the instant finality of it all. My animals are always well cared for and a quick and respectful death is what I ask for.”

More than 50,000 people have viewed the video since it was posted on the video sharing site YouTube on Friday (9 May).

NFU president Meurig Raymond said: “This is a shocking film, but we make no apologies for that. This is the distressing reality farmers such as David are having to face as bovine TB continues to devastate farming families across large parts of the country.

“Many farmers in areas where TB is endemic in the wildlife population are rapidly losing all hope for the future because they are powerless to stop the spread of this disease, no matter what they do.

“Our message is clear – this cannot go on. Wildlife controls are an integral part of the government’s 25-year TB eradication strategy and the NFU remains committed to doing everything it can to find a way forward for the current policy.”

More than 38,000 cattle were slaughtered because of bovine TB in the UK in 2012, according to DEFRA.

A second year of badger culling, as part of government plans aimed at eradicating bovine TB, is due to get under way soon in the pilot counties of west Somerset and west Gloucestershire.

But the government has postponed extending the culls to other regions until at least 2015 .

In 2012, Mr Barton said it was an “outrage” that TB had been allowed to get out of hand in wildlife. He warned he would likely quit farming cattle unless the government introduced a cull in his county .