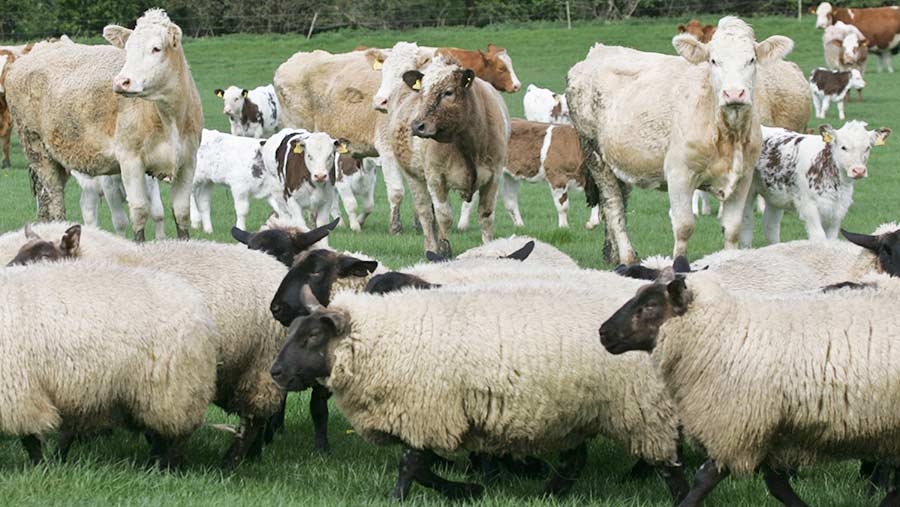 An unusual flare-up of a rare cattle fever in the south-west has prompted animal health professionals to warn farmers to observe cattle closely when co-grazing them with sheep.

Three separate farms – two in west Dorset and one in east Devon – were recently forced to euthanize animals with isolated cases of malignant catarrhal fever (MCF), a mysterious condition linked to mixed grazing with sheep.

All three farms reported that cows had followed sheep in the grazing rotation.

Synergy vet Alasdair Moffett said sheep were the “common link” in the three farms and that dairy farms renting winter grazing to sheep or mixed farms would be at most risk from MCF.

See also: 16 ways to tell your cow is happy

MCF is not a notifiable disease or likely to spread, but British Veterinary Association senior vice-president John Blackwell told Farmers Weekly there were “knowledge gaps” about how the condition was transmitted between animals and from sheep to cows.

He said a serology test was the best route to finding out what the range of symptoms could be, with the high temperature perhaps being the biggest indicator of MCF.

However, he said that MCF posed no threat to humans and it was “sporadic” by nature, adding that it would not spread like some other fevers, such as the common cold.

“We know that one of MCF’s trigger points is co-grazing with sheep and we know the risk increases at lambing time.

“It is a sheep herpes virus and its symptoms are similar to Infectious bovine rhinotracheitis, bovine viral diarrhoea and bluetongue. It is another reminder of the importance of being vigilant and watching stock closely.

“Sheep do not seem to be affected at all by MCF, and neither are humans – it is not zoonotic, nor is it a notifiable disease.”

He said that three cases in a locality “would be unusual”.

“We saw a case of MCF in our mixed practice in the Shropshire/Welsh border area in one stock bull, which had to be put down. The fever is invariably fatal and they don’t recover. Animals that go down with MCF become very listless and become isolated.”