Post-mortem data on the incidence of Johne’s in fallen sheep supports concerns that the disease is “majorly under-diagnosed” across the UK, according to UK vets.

Johne’s disease was picked up 420 times during the post-mortem examination of fallen sheep in England, Wales and Scotland in 2013, 2014 and 2015, an exclusive Farmers Weekly investigation has shown. 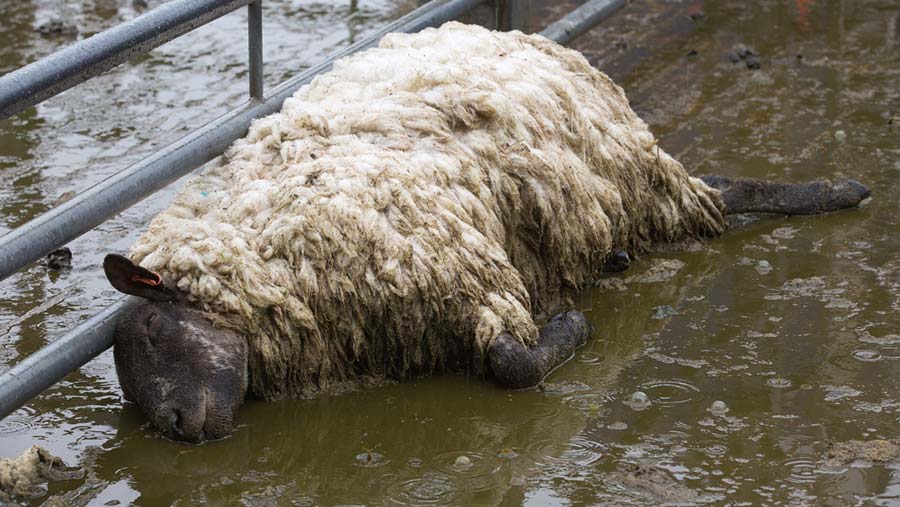 By comparison, in Northern Ireland, Johne’s was detected in just four sheep submitted to the Agri-Food Biosciences Institute (AFBI) for post-mortem over the same three-year period.

See also: How to identify and manage maedi visna and Johne’s in ewes

Jane Anscombe from Farm First Vets, Abergavenny, Monmouthshire, agrees the APHA data – obtained by Farmers Weekly through a Freedom of Information (FOI) request – may not be a true reflection of the levels of Johne’s disease on farms.

She says low detection rates could be considered an indication of under-diagnosis on farm.

“The data shows a picture of what is being submitted to the labs, which may not be a true reflection of the levels on farms.”

“Johne’s in sheep is a disease that is majorly under-diagnosed,” she says.

“From my experience, I don’t think many farmers look for it.

“When I looked over the data I did wonder if that was affecting the number of diagnosis in many regions.”

In 2015, 139 cases of Johne’s disease were detected in fallen sheep in England, Wales and Scotland, according to the data.

Lee-Anne Oliver from Scott Mitchell Associates Veterinary Surgeons, Hexham, Northumberland, says while it is difficult to speculate on the reasons for disease prevalence in each region, it is likely to be connected to sheep population density.

Miss Anscombe and Mrs Oliver both believe the relative low detection rates detailed in the data can be part attributed to the decentralisation of livestock post-mortem examination.

In recent years, the APHA has closed a number of the veterinary centres previously tasked with carrying our post-mortems.

Instead, responsibility is largely delegated to a number of subsidised institutes:

With more livestock post-mortems and blood tests now carried out by private vets and in private labs, the APHA has an incomplete picture of the situation with diseases such as Johne’s in sheep, they say.

“Surveillance changed in England and Wales a couple of years ago and a lot of local labs were closed down with responsibility moving to private vets and private facilities. While still a government subsidised programme, there is a general worry that all the data isn’t available,” says Mrs Oliver.

“In days gone by, the APHA would have had all the data on post-mortem submissions, but now data is held by private vets.”

Miss Anscombe adds: “There is no system for sharing the data from private labs with APHA – apart from diseases with statutory controls.

If a new disease were to occur there would be less chance of it being recognised with the patchier post-mortem service as there are less opportunities for vets around the country to share their findings.”

Vets and other private companies carrying out post-mortem examinations on behalf of farmers – many of whom hold large amounts of data – and the government have a responsibility to collaborate, they say.

“The government has a responsibility in terms of surveillance, but there needs to be some sort of collaboration between private companies and the government to share this information for the greater good and for the good of the farmers,” says Mrs Oliver.

However, some responsibility also lies with farmers, she adds.

“With some of our clients, all carcasses go for post-mortem. But with others they’ll lose five or six sheep before they do anything.

With diseases like Johne’s and OPA in sheep, post-mortem is invaluable for farmers to know if they’ve got it.”