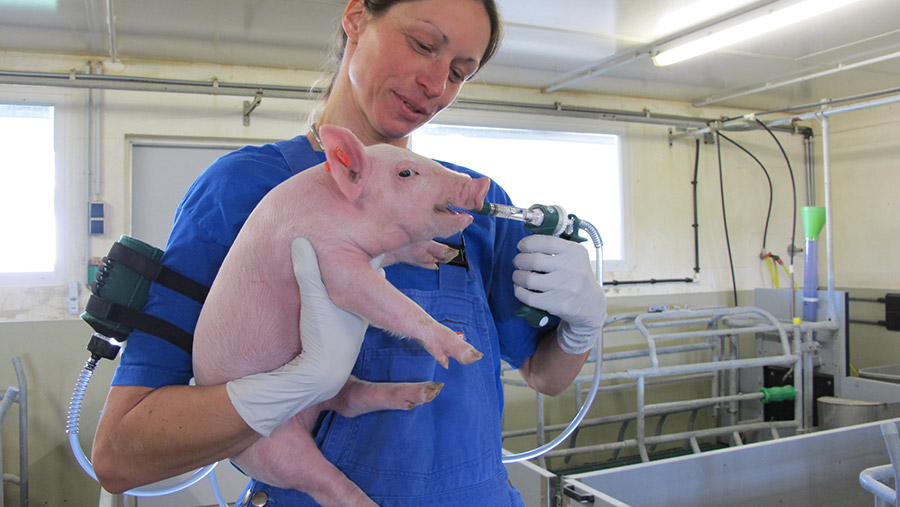 British pig producers have been handed a new tool to fight disease and antibiotic resistance after a salmonella vaccine was granted a UK licence.

Salmoporc has already proved effective in pig herds in Germany and Poland, but it is the first time a salmonella vaccine has been made commercially available in the UK.

The live, attenuated vaccine protects pigs against Salmonella typhimurium, and certain variants, which can have serious health implications for both pigs and humans.

See also: How to prevent and treat a salmonella outbreak on farm

The UK has the worst rate of salmonella infection in the EU, with a prevalence of 19.5% in herds.

One reason for that is the high proportion of outdoor herds, where the disease is particularly difficult to control.

That is because the salmonella bacteria can survive in soil for a year and even longer in dried dung.

Researchers have isolated viable salmonella bacteria in fields, two years after being vacated by pigs.

Rike Schmelz, vet for manufacturers Ceva, explained the vaccine would also help in the battle with antibiotic resistance.

“Clinical cases of diarrhoea often occur after weaning and tend to be treated with antibiotics,” said Dr Schmelz.

“The monophasic variant of S typhimurium is already multi-drug resistant and vaccinating pigs can help farmers to substantially reduce their reliance on antibiotics,” she said.

Dr Schmelz also pointed out it would help overcome a potential growth in salmonella caused by the removal of zinc oxide at therapeutic levels from the feed in mid-2022.

And the vaccine manufacturers claimed immunising pigs against S typhimurium would lead to an economic benefit from lowered mortality and improved daily liveweight gain.

Ceva quoted independent trials at the University of Ghent in Belgium that showed vaccinated piglets from three herds gained between 30-39g over three to 29 weeks – significantly more per day than unvaccinated piglets.

Meanwhile, trials in Germany have shown, when combined with a competent hygiene programme, vaccinating sows and gilts can eliminate salmonella from the supply chain.