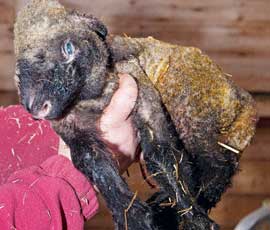 Sheep farmers buying in breeding stock from areas badly hit by Schmallenberg virus are being advised to conduct fertility tests on rams.

Maarten Boers, a vet from the Livestock Partnership, warned rams recently infected with Schmallenberg could be sub-fertile which could affect performance at tupping.

Meanwhile, producers buying breeding females from areas with a low disease incidence, which may not have antibodies to the virus, are being advised to vaccinate to protect them throughout the critical period of gestation.

Schmallenberg crept further north this year, with cases being reported as far as Scotland. However experts warn that many cases are going unreported which is obscuring the true picture.

Mr Boers’ warning comes after three tups out of eight recently bought by one of his clients from a market in North England tested sub-fertile, while all homebred rams were unaffected.

He says it is likely the rams had been exposed to Schmallenberg recently and had consequently succumbed to a fever, which can affect fertility.

“Schmallenberg infected rams won’t cause any infected lambs but they could be less fertile.”

He strongly advises anyone buying breeding stock from high-risk areas to complete a fertility check on rams 2-3 weeks prior to tupping to make sure they are up to the job.

However, he said infection was unlikely to cause any long-term damage.

“If the physical examination doesn’t reveal any obvious problems, such as testicular abscesses and there’s a suspicion Schmallenberg could be the cause, then re-test because they can recover from it.”

He said there was also a strong case for vaccinating breeding ewes if they were being moved from low risk areas to high-risk ones and providing they haven’t already gone to the tup.

The Bovilis SBV vaccine has been licensed under strict guidelines and cannot be administered to pregnant animals or rams, but flocks lambing later next spring can still protect stock.

Alfredo Sanz Moreno, vet adviser at MSD Animal Health said: “The level of antibodies is at its highest three weeks after vaccination. So if you are thinking about putting the ram out on the 24th of October you should vaccinate on the first.”

Mr Sans Merino stressed that producers should speak to their individual vets who will be in the best position to provide advice based on specific circumstances, particularly if they wish to administer multiple vaccines.