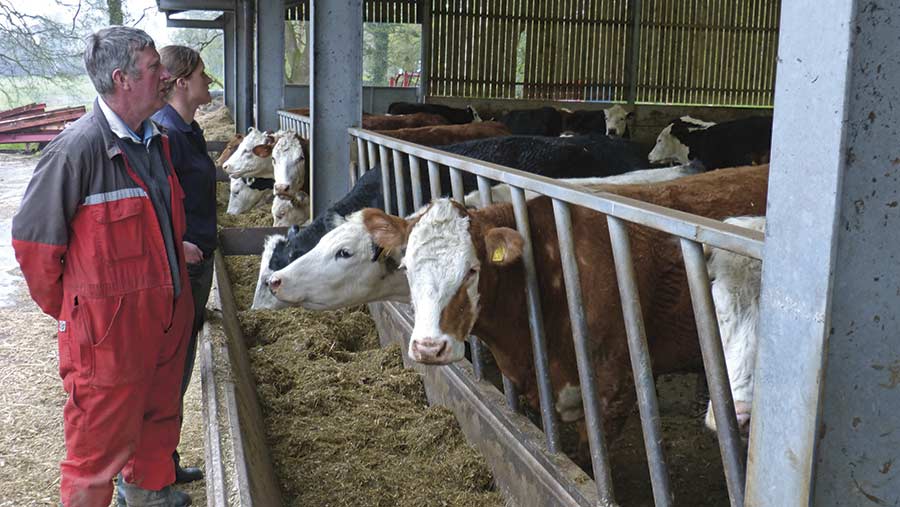 A concerted effort to monitor and test for bovine viral diarrhoea (BVD) is keeping the virus at bay on a Cheshire beef unit, which has learned its disease lesson the hard way.

Nigel Potts of Mount Farm, Macclesfield, says his two BVD experiences have been the most depressing things he has encountered in his farming career.

BVD first killed 15 calves in 2008 from his then 90-head herd. A second outbreak in 2012 led to two persistently infected (PI) calves that required culling and 12 heifers not holding service out of a batch of 28.

Calculating the economic impact, Mr Potts, who has since signed up to BVDFree England, says BVD has leached over £23,000 from the business in lost calf revenue (29 animals weighing 380-400kg priced at £2/kg).

But he says the emotional strain has been harder to deal with. “I dealt with TB better than I did seeing calves dying and not being able to intervene,” says Mr Potts, who lost a group of 40 cows to bTB last year. 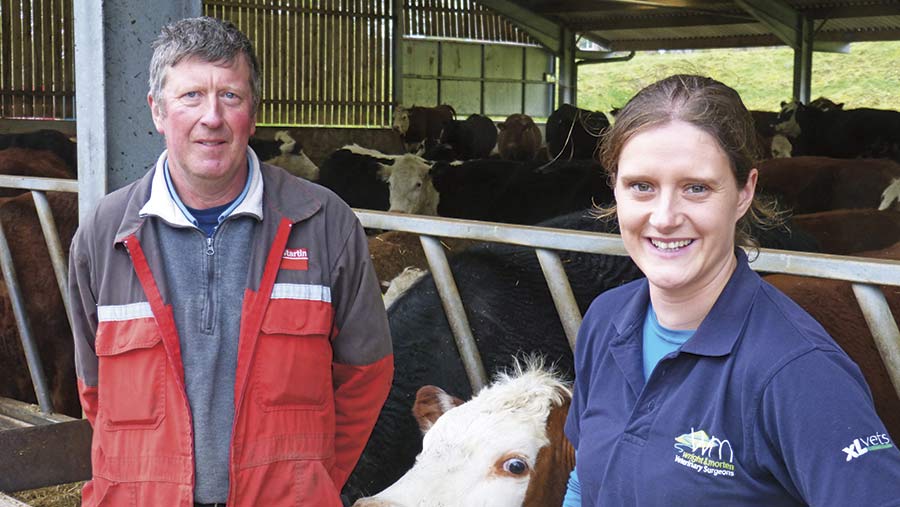 “BVD is a devastating disease. In 2008 we had a couple of calves slip six to seven months into gestation and then we lost 13 calves that were born alive.

“We conducted post-mortems and blood tested for the BVD antigen. Results confirmed BVD was causing the deaths.”

After the initial outbreak Mr Potts adopted a closed-herd and blanket vaccination policy with a two-shot vaccine.

The farm then had another BVD scare in 2012, when two PI calves were born.

It was at this point that veterinary surgeon Hollie Dale of Wright and Morten suggested a one-shot vaccine should be used on heifers, which are bulled at 14-16 months.

“We suspected that lapses in BVD vaccination had allowed BVD to persist in the bulling heifers,” explains Ms Dale. “The fact that everything was now born and bred on the farm led to us thinking we had BVD covered but we didn’t.

“The fact the heifers now only need one shot, which takes two weeks to provide full cover, means we no longer struggle to ensure the heifers are vaccinated before service.”

Breeding females run in bulling groups of 40. Five calves are blood tested from each management group at 9-18 months of age, ensuring they have not been exposed to BVD.

“Vets recommend that five to 10 calves is sufficient for any sized group due to the way BVD spreads, although more calves need sampling if there is movement between animal groups,” explains Ms Dale. “It’s such an infectious disease.”

Being in a six-month TB parish means that breeding stock can be vaccinated ahead of bulling and calf bloods can be sampled at a handy time for the vets and farm staff.

Making sure vaccinations are done in time for bulling is helped by using a one-shot vaccine, explains Ms Dale.

“The vaccine only takes two weeks for animals to develop immunity. This is in contrast to the previous ‘killed’ two-shot vaccine which required a six-week period for immunity.”

He says the disease costs 100kg or more in weight gain over 14 months, with infected calves growing at a reduced rate of 0.6kg/day.

After three years of tagging and testing, Mr Potts has found no PI animals.

“We’ve now moved back to blood sampling and no longer tag and test but we must not let our efforts slip.”

The National Beef Association Beef Expo will take place at the National Agricultural Exhibition Centre, Stoneleigh, next week on Thursday 18 May.

A major feature of the event is the National Commercial Cattle Show (NCCS), which will see farmers from the length and breadth of the UK showing the very best cattle from their herds, all hoping for a share of the £5,000 overall prize fund.

Alongside the NCCS, visitors have the opportunity to browse in the region of 120 commercial and educational trade exhibits, as well as specialist Breed Society stands.

You can visit the BVDFree England stand at the event to learn more about the scheme and eradicating BVD.

For more information about Beef Expo or to purchase tickets visit www.beefexpo.co.uk

A Lancashire heifer rearer and White Park breeder’s no-nonsense approach to BVD is keeping the disease at bay while helping boost demand for his breeding stock.

David Graveston of Park House Farm, Gisburn, found five PIs since 2013 – three of which have come from other holdings for which he has negotiated a refund due to them being “not fit for purpose”.

The tally begun following a BVD clamp-down when North West Rural Development money assisted with the screening of the Ribble Park herd of Holstein cows and calves on the farm along with the Ribblesdale White Park herd.

“I applied for the scheme as we had some pneumonia one year. We just had a lot more poor-doing animals. We were funded £600 towards screening the herd but since then BVD control has been self-financed.”

Every animal bought or born on the farm is tag and tested for BVD. Bought-in calves are isolated and tested within 24 hours and a BVD result is received within three days.

Tag and testing costs around £4 a head.  Each ear tag costs £1.50 with a further £2.50 for the cost of the testing, through the laboratories at CIS (Cattle Information Service).

All calves eight days old or over receive an intranasal vaccine (BRSV and PI3V) and everything three months or older is vaccinated for BRSV, PI3, BVD and IBR. A “one-shot” BVD vaccine is used on heifers pre-service and adult cattle each year.

Mr Graveston says investing in BVD tag and test packages and vaccinations is a win-win, giving him confidence in the stock he’s selling and the stock the customer is buying.

“Communication with our customers is key to all that we do and, be it buying or selling breeding stock, the paperwork must match our needs.

“My heifers sell at Gisburn market with the ministry-approved eartag, along with either a BVD test built in or a third eartag, which is a BVD management eartag. When people see our animals with three tags in, the word soon gets around.”

Mr Graveston has not signed up to BVDFree England, something he sees as a “tax” he won’t benefit from and instead has raised awareness himself, although the Graveston’s vet Andy Barrett, Kingsway Veterinary Group, thinks otherwise.

He says all cattle keepers should know the BVD status of their herd and work with their vet to develop a plan to eradicate BVD and keep it out, which will benefit the whole industry.

“Cattle are always healthier and farmers better off without the virus,” says Mr Barrett. “Signing up to BVD Free England is a great way to demonstrate your commitment to becoming clear of BVD virus and making sure you get the maximum value from any cattle you sell.”