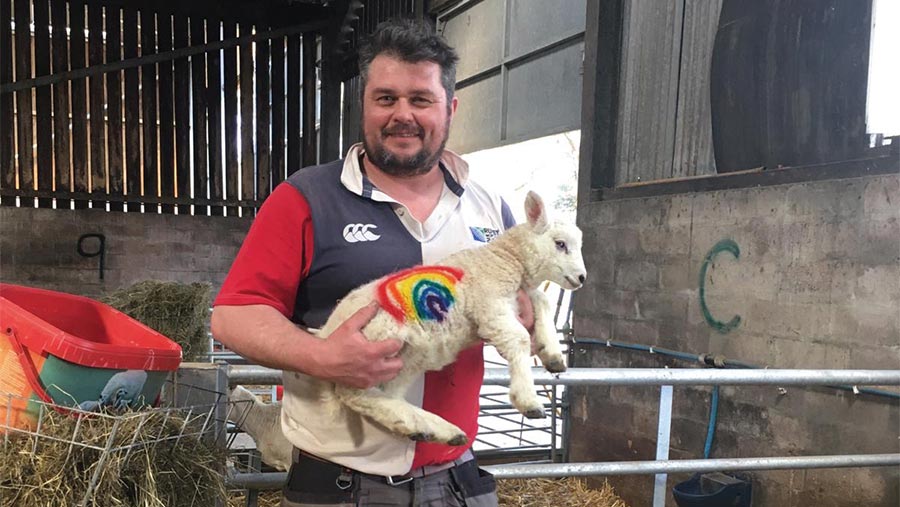 Matthew Isaac has reduced cases of watery mouth and joint ill at lambing to nothing by using good bacteria to keep infections at bay.

Mr Isaac, who runs a flock of 1,550 ewes at Mynachdy farm, Pontypridd, used to have serious problems with joint ill and watery mouth in his lambs and would typically lose 10 or more lambs a season.

Watery mouth is an infection caused by E coli, while joint ill causes infection of the joints or navel.

Ten years ago, having exhausted other avenues, he began using antibiotics – but he was aware of antibiotic resistance and wanted to move away from them.

Mr Isaac, who farms with his brother Daniel, father Richard, and nephew Jacob, started working with Aled Rhys Davies, Nuffield scholar and director of Pruex – a business set up to help farmers reduce antibiotic use.

For the past two years they have used a couple of products based around the probiotic concept of ‘good’ bacteria outcompeting ‘bad’ bacteria, with great success.

“We have had no cases of joint ill and where we had watery mouth – which is rare – it’s been down to management,” says Mr Isaac.

Mr Davies initially visited the farm to take some swabs from the water and lambing environment.

These showed presence of harmful bacteria, and he recommended using Animal House Stabiliser (AHS) to keep the bedding dry.

The commercial flock lambs indoors from 12 March and the second block (Welsh and Romney) lamb outside from 1 April.

Mr Isaac sprays the straw bedding with a litre and a half of AHS each day, using a handheld mist sprayer, which covers 1,000sq metres.

“Although this adds time, it has saved time too by not having to catch lambs and treat them – it’s a five-minute job once a day,” he says.

He also treats the water with Water Plus – to remove biofilm – and applies AHS to the lamb’s navel and the ewe’s nose and udder.

In addition, the father-and-son team have conducted a five-point plan, which involves:

They have also saved money by no longer using disinfectants to clean the shed.

“We would have spent a lot of money on disinfectants in the past – at £70-80/gallon. But between losing lambs with watery mouth and joint ill it [AHS] has paid for itself.”

The treatment and five-point plan have brought benefits in lameness too.

“We don’t seem to get as many lame ewes; when the animals are healthy they’re happy and thriving,” he adds.

In simple terms, the Pruex products populate the environment with ‘good’ bacteria to fight the ‘bad’ bacteria – unlike antibiotics, which kill all bacteria – both good and bad.

“A lot of the problems on farm can be solved by getting a dry bed, clean water and clean air,” says Mr Davies.

The AHS contains ‘good’ bacteria, which originate in soil – these have been selected because they consume organic matter aggressively. They also produce beneficial enzymes which use moisture as they multiply and take it away from the bedding. These bacteria also outcompete ‘bad’ bacteria such as E coli and streptococcus.

Having a clean, dry bed protects the ewe’s teats from picking up harmful bacteria and passing them to the lamb. Treating the teats and the lamb’s navel offers similar protection.

How does the water treatment work?

The same bacteria in Water Plus eat away any biofilm in the water, biofilm should only be detectable under a microscope.

When a ewe drinks out of a trough with a biofilm carrying E coli, it can grow on the ewe’s face and then be passed on to the lamb when it is born, leading to watery mouth. 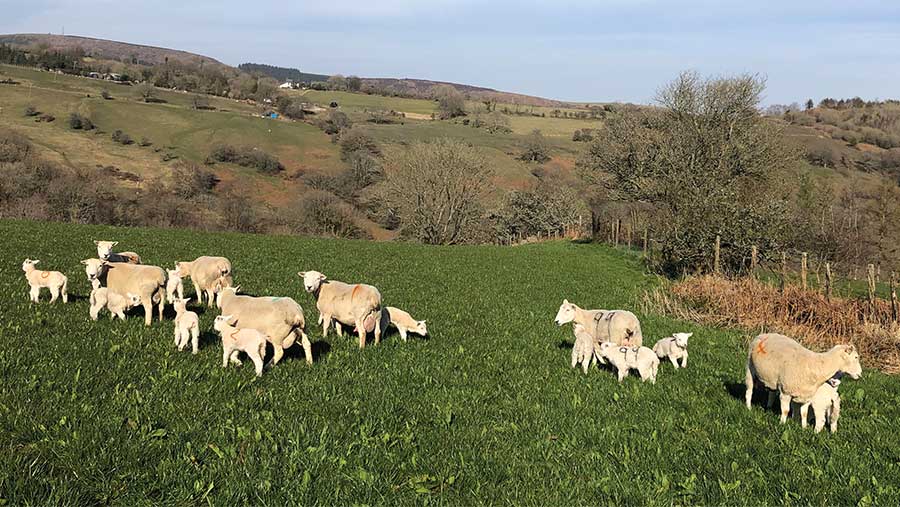 Running a grass-based system, the family reseed 16-24ha every year with high-sugar grass leys, containing chicory and plantain, on which to finish the lambs.

They buy in 80t of fodder beet to feed the Romney and Mountain ewes from January to March, then put high-energy blocks out three weeks before they lamb.

When the lambs are three weeks old, they are mob grazed with their mothers in paddocks of between 3ha and 6ha, and are weaned at 12 to 14 weeks.

Mr Isaac buys rams from breeding company Innovis and uses an Abermax as a terminal sire on the crossbreds, an Aberfield on the yearlings and a Texel on the older ewes.

He aims to move away from the Texel next year and put all the breeding ewes for replacements to Aberfield for ease of lambing.