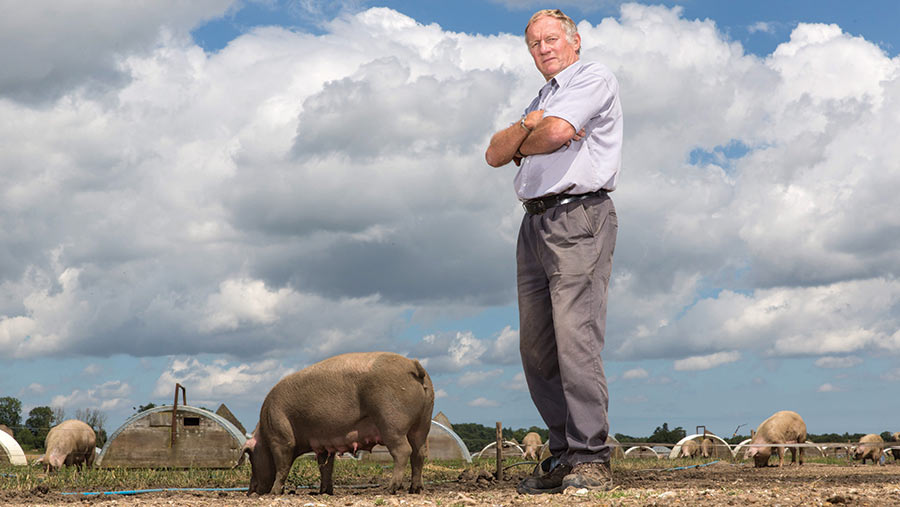 Zinc oxide is to be phased out of pig diets by 2022 under new EU rules. We spoke to one UK producer to find out how he is already managing without it to see what others can learn.

Pig producer Simon Watchorn has successfully removed zinc from rations after working with his vet and adopting rigorous biosecurity, hygiene and nutrition measures.

The decision to remove zinc from diets was taken 12 months ago and followed a successful programme to end routine antibiotic use on the farm.

See also: Zinc oxide to be phased out in pig production by 2022

Mr Watchorn wanted to stop using antibiotics because of the publicised concerns over resistance and because the regular use in rations was costing £15,000 a year.

The target was to cut out zinc as well, but he and his vet felt that removing both elements at the same time carried too great a risk.

Instead, they decided to cut antibiotics first and devised a plan to bolster the pigs’ immune systems by cutting down the disease challenge.

“We introduced an acidification process to the water supply to reduce the presence of harmful bacteria,” Mr Watchorn explains.

Lowering the water to a pH of 3.8 kills the salmonella bacteria and, at a total annual cost of about £5,600, acidifying the water saved £10,000 a year compared with the previous antibiotic treatment cost.

The acidification process went hand in hand with a rigorously applied cleaning and biosecurity programme, which included:

“Only once the policy was in place and working did the vet and I agree to take out zinc,” Mr Watchorn says.

“We were extremely nervous about removing zinc because it has been vital in reducing scours in piglets at weaning,” he adds.

The first few months in the high-health environment passed with little difficulty.

But the winter showed how important it was to have every element of the stringent programme working perfectly.

Plummeting temperatures froze pipes, which meant the acidified water could not be pumped to troughs.

“Instead, we tankered water out to the fields. But it didn’t have the added acid and so was a higher pH. Within days weaned piglets began to scour,” Mr Watchorn says.

“If we had still been feeding zinc the vet and I felt we would not have seen the scours return.

“The setback showed us how vulnerable piglets are without the zinc and how you have to be on top of every element of cutting the disease risk when it is not in the ration anymore,” he says.

Once the acidified water supply returned, the scours ended.

“After 12 months I am more confident, but I would warn anyone that removing zinc cannot be done without a great deal of planning, a ruthless approach to hygiene and biosecurity and a working partnership with a vet,” he says.

What is zinc oxide and why is it important?

Zinc oxide has been added to piglet feed since the early 1990s and is included in up to 90% of starter diets.

Its inclusion is to help piglets fend off infections and reduce diarrhoea when their immune systems are lowered during and immediately after weaning.

Research has indicated that zinc oxide has an antibacterial effect against bacteria like E coli, Staph aureus and Enterococcus species. But certain EU countries have raised concern that zinc is contaminating soil. In June the European Commission announced proposals for a programme to phase out the use of zinc oxide in pig feed on environmental grounds by 2022.

It is essential that pigs at the point of weaning are in the best condition possible that will allow them to thrive in the post-weaned period, writes Dr Mandy Nevel, veterinary senior manager at the AHDB.