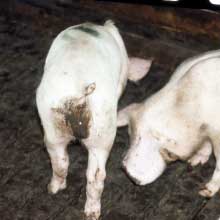 Swine Dysentery has long been recognised as a major cause of loss to pig industries throughout the world. The causative bacterium was identified back in the 1960’s now referred to as Brachyspira hyodysenteriae, but previously known as Treponema and Serpulina hyodysenteriae.


Dysentery, as a pathological condition, is typified by bloody diarrhoea and in its original form this is how the disease presented in pigs. However, Brachyspira hyodysenteriae is not the only cause of bloody diarrhoea in the pig, but conversely it is now recognised that not all strains of Brachyspira hyodysenteriae cause classic signs of Swine Dysentery.

The typical pig affected with swine dysentery will appear dull, depressed and inappetant with sunken (or slab) sides to its abdomen.

Dehydration is common. The faeces will range from soft to almost water, containing blood, mucous and in severe cases necrotic gut lining. It will give off a distinctive and unpleasant smell. The disease runs over a number of days, with initially raised rectal temperatures up to 41C (106°F) but this will fall over a few days. Death can result early on or later and may itself be the result of dehydration/salt poisoning.

As a group disease, signs will spread steadily within and between pens over a number of days – rather than explosively. Untreated and uncontrolled, the disease will persist within dynamic production systems for prolonged periods of time, if not permanently.

In a naïve population, the disease can occur in all age groups of pigs – as young as 2-3 weeks of age and in adults. However, it is most typically a disease of the growing pig above 12 weeks of age and in chronically infected herds disease is often restricted to this age group.


Diet can have dramatic effects on the severity of the disease and some studies have shown that even in the face of severe challenge, pigs fed on cooked white rice show little sign. Swine Dysentery is a disease of the large intestine (colon) and this suggests that digestibility of the diet can affect the growth of the organism in the gut and the damage it subsequently does – the better the diet is digested in the small intestine, the less substrate will pass down the gut on which the organism will thrive.

Individual pigs that survive infection can range from fully recovered to chronically stunted with permanent diarrhoea. In between, long-term effects may only be measurable by accurate recording of growth rates and feed conversion efficiency.

In recent years, “milder” strains of Brachyspira hyodysenteriae have been recognised which present more as a low grade, cow-pat like, grower scour than as frank dysentery. (Fig 3). However, these strains appear to have the ability to “drift” within a population, causing variable levels of disease.

Swine dysentery should be suspected in any situation where spreading scour is seen particularly in growing pigs, and certainly where there is any sign of blood or mucous in the scour.

Post mortem examination of affected pigs – either freshly dead by natural causes of the disease or by euthanasia – will show signs typical of swine dysentery within the spiral colon – oedema within the gut wall with congestion with swollen lymph nodes. The inside lining of the large intestine (colon) will be inflamed, necrotic, blood streaked and with foul smelling material adhered to the surface. In milder cases the colon may only appear mildly congested and inflamed with watery grey contents.


The organism can be demonstrated in faeces, gut contents and mucocal scrapings by PCR tests – which have largely superseded a range of other laboratory tests. It is possible to see spiral organisms under the microscope in wet smears prepared from typically affected gut lining. However, this is not definitive for Brachyspira hyodysenteriae.

Other diseases that can mimic swine dysentery in the growing pig include Salmonella, Swine Fever, severe Spirochaetal diarrhoea (Brachyspira pilosicoli infection) and Trichuris suis infection whereas the less specific grower scours can arise as a result of dietary indigestion, chilling and infection with a wide range of organisms that include B. pilosicoli, Yersinia, E.coli, Salmonella and Lawsonia. Secondary invasion of the colon by Balantidium coli – a commensal gut parasite – can produce signs of blood and mucous making diagnosis complex.

A full veterinary investigation of suspect disease is always necessary.

Over the last two decades the range of treatments available for swine dysentery in the UK had declined both due to withdrawal of products (Carbadox, Arsenicals, Dimetridazole and Romidazole) or by the development of variable levels of resistance to antibiotics (e.g. Tylan).

Tiamutin and Lincocin can be effective treatments given by injection or in water, and both of these products along with Valnemulin and Tylvalocin are available as in-feed products, which can be used at different levels, under veterinary direction, to effect treatment. As with any systemic disease, treatment of the sick pig by reliance solely on in-feed medication is frequently unsuccessful.

The primary aim for all herds is to prevent introduction into the unit which can be achieved by:

In the indoor situation, siting of the herd well away from any other pigs is vital to avoid the risk of this and many other diseases.

Once present within the herd, the effects of disease must be carefully evaluated. In severe cases, the depressant effect on performance and high costs of continual high level medication can make the herd unsustainable, necessitating eradication strategies such as depopulation/repopulation, partial depopulation with medication regimes or pure medication eradication following sensitivity testing on cultures of Brachyspira hyodysenteriae.

Where it is feasible to live with swine dysentery, hygiene standards must remain high at all times. Strict ‘all in, all out’ procedures interspersed with thorough steam cleaning and disinfection, with or without lime washing, is vital. In the continually occupied scrape through solid system, control without permanent medication can be almost impossible. Strategic use of in-feed or water medication at specific stages of production, or by pulse dosing if the system allows, can control the disease, particularly if spread around the farm. It is restricted by good hygiene and discipline.


Effective vaccines are not currently available

Inevitably, with such a variable disease, the costs can vary dramatically. In the most severe chronically affected dynamic herds such as a breeder/feeder herd SD infection can depress herd feed conversion efficiency by 0.5 or more – requiring an extra £7 of feed/pig finished which, when added to permanent medication, mortality and non-marketable pigs etc can exceed £10/pig produced.

In milder cases, depression in performance can be offset using management and medication limiting cost to no more than £2/pig produced. However, in times of financial constraint even this may be unsustainable.

Swine dysentery remains a major threat to UK pig farms. It’s diagnosis is complex, requiring full veterinary involvement, but the variability and appearance of less severe forms of the disease has led to some producers regarding it as a ‘live with’ disease. Control, however, can be expensive and difficult and in all cases eradication should be considered.