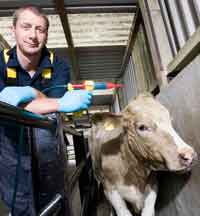 A ground-breaking cattle pour-on that can treat fluke, worms and external parasites, has been launched byNorbrook Labs.

The breakthrough is a culmination of a six-year research project costing £3.5m and involving 80 scientists at the company’s research headquarters in Newry Co Down.

“Currently fluke is treated by injection or oral drench – both time consuming and difficult processes for the farmer, which can also be stressful for the animal.

“In contrast, the pour-on solution can be applied swiftly and easily with no detrimental impact on cattle,” said Mr Couper.

Fluke could have a devastating effect on beef and dairy herds, seriously weakening and in some cases killing the animal by destroying the liver.

“At the very least, it collectively costs farmers about £17m a year by reducing the weight of beef cattle and milk yields in dairy cows,” he said.

Global warming has seen more parts of the UK experiencing mild and wet conditions on which the parasite thrives.

“Developing a pour-on to deal with these parasites has baffled scientists for 20 years; this is the Holy Grail of farm animal medicine,” he said.

This was an important milestone for Norbrook and for livestock farmers worldwide, said Lord Ballyedmond, chairman of Norbrook Labs. “We have now developed the world’s most effective remedy for parasite control in cattle that are entering the food chain.”