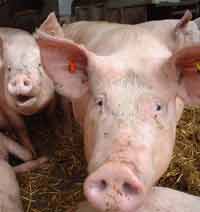 Animal rights campaigners are targeting a farmer who hopes to establish Britain’s biggest pig farm – a 2500-sow unit in Derbyshire.

A planning application for the 12ha unit on land adjacent to womens’ prison Foston Hall, Foston, has been submitted by Midland Pig Producers.

When complete, the unit will house 2500 sows and offspring in a state-of-the-art unit, producing 1000 pigs a week for sale.

It will include a biogas plant to generate energy from animal waste.

The proposal is the brainchild of MPP managing director Martin Barker, who was named Farmers Weekly Pig Farmer of the Year in 2009.

MPP already produces over 100,000 pigs each year from 30 farms across eight counties and employs over 150 people.

Farms with integrated biogas facilities were one of the most exciting developments in farming for many years, said Mr Barker

The site would inextricably link agriculture and environmentally-friendly power generation and bring prosperity to the local rural economy, he claimed.

But activists from the Viva! animal rights group have launched a campaign against the pig unit proposal.

They are urging people to write letters opposing the planning application to South Derbyshire District Council.

“As far as we know, these plans are for the biggest factory farm of pigs so far in Britain,” said Viva! campaign manager Justin Kerswell.

The proposal was ill-thought out and potentially hazardous to people living nearby, he claimed.

“It will also bring an unreasonable increase in noise levels for adjoining residents from machinery, traffic and the animals themselves.

“The potential health and environmental consequences of placing Britain’s largest ever pig farm next to an inhabited area should not be underestimated.”

Mr Barker said the Derbyshire development would create nearly 20 jobs on site and further employment throughout the local area.

There would be none of the usual smell normally associated with pig farms of any size, he added.

“There will be three systems in place to ensure that all the gasses are retained for the biogas plant.

“If one system should fail the other two will still work preventing the ammonia and gasses escaping into the atmosphere.”

Details of the planning application can be viewed by entering the reference “9/2010/0311” at sddc.planning-proposals.co.uk.

The application is open for consultation until 30 June. South Derbyshire District Council will decide whether to approve it later this summer.