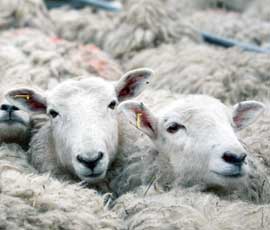 Deformed lambs born on farms in Sussex and Norfolk were caused by the virus, farmers in the counties have been informed.

Once they have been included in official figures, the two new cases will take the number of confirmed cases to 13 in the UK.

The confirmed case in Norfolk involves a small sheep flock south of Norwich.

Government vets confirmed the presence of the virus based on a postmortem examination. More detailed results from a viral analysis are due later.

Organised by the Mid Downs Sheep Group, the evening meeting will include a presentation by a veterinary expert.

The virus – which can affect cattle and goats as well as sheep – is believed to have been carried by midges from continental Europe.

It was unknown until identified last year in Germany. Any risk to human health is said to be minimal.

Livestock have now tested positive for Schmallenberg virus on 314 farms in Germany, according to the Friedrich Loeffler Institute.

Livestock symptoms can include a temporary lack of appetite, reduced milk yields and loss of body condition.

But pregnant animals can be more seriously affected.

The virus can cause considerable congenital damage, premature births and reproductive disorders.

The Netherlands, Belgium and France have also reported cases of the virus, mostly in sheep.

Analysis of genetic material in Germany led to the assumption that the virus belongs to the Simbu serogroup of Shamonda, Aina and Akabane viruses.

The new virus could be isolated, cultivated and replicated. It was named Schmallenberg virus after the town where it was first reported.

To speed up detection, Germany scientists have shared their testing methods with Belgium, France, England, the Netherlands, Italy and Switzerland.

But it is still unclear whether the virus is newly introduced or whether it has been present undetected in ruminants in Europe for some time.

Share your own thoughts on Schmallenberg on our forums and follow the latest developments on our dedicated page.