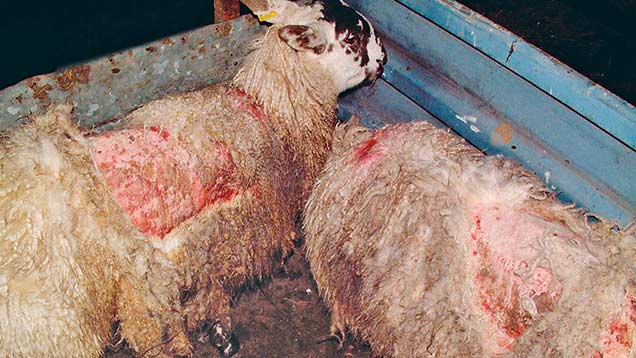 Confusion among sheep farmers over injectable treatments for sheep scab remains one of the main issues affecting the spread of the disease, according to experts.

Adas sheep adviser Kate Phillips believes there’s still a lack of understanding about precisely how the injectable treatments work or how to use them to combat sheep scab spread.

“Using injectables rather than using an OP dip is more complicated. And there is the added concern over the build-up on anthelmintic resistance because a worm treatment is included in these products.

She says there’s confusion over the persistency of the various injectables.

“Some treat the problem, but don’t give much cover. Some provide cover for only 14 days when in fact the sheep scab mite lives off the sheep for 17 or 18 days.

“If sheep are treated with a 14-day cover product and then returned to the flock they will reinfect other sheep,” warns Mrs Phillips.

She advises sheep producers using scab treatments to select injectables carefully and understand how they will work and to have a discussion with their vet.

As a biosecurity measure all bought-in sheep should be considered a risk of introducing sheep scab and treated as a precaution.

NSA’s figures, based on member feedback from England and Wales, suggest 10-12% of flocks are infected with sheep scab at any one time.

Although sheep scab is found in flocks across England and Wales there are “hot spots” in Gloucestershire, Devon, Cumbria and the Welsh borders.

Misdiagnosis based on the assumption that wool loss or “rubbing” is being caused by lice continues to exacerbate the spread.

“To keep scab out of a flock all sheep producers should adopt good biosecurity measures, maintain their fences and boundaries and deal with any bought-in sheep as though they are a potential risk of infection.

“I’ve been told by some big buyers of store lambs that they buy-in sheep scab very time they buy batches of lambs and so always treat as a routine. But the fact that scab is still so prevalent is very worrying and confirms the need for all flock owners to be diligent.”

Mrs Phillips says sheep that have been injected must not be returned to where they came from.

“They can quickly become reinfected with mites on hedges or fences. And every sheep must be treated.”

Vet Heather Stevenson, based at SRUC in Dumfries, says sheep scab is not just a problem confined to autumn through to spring when sheep are carrying a full fleece, but can also affect sheep in the summer months.

“Sheep farmers must be aware of the risk of reinfection, even after treatment. Sheep scab mites can live for 17 days on the penning of sheep-handling systems.

“So if infected sheep have been run through a handling race, the gates still pose a risk of infection to other sheep.”

A new blood test to check for sheep scab infection is expected to be available by the autumn.

The test, which has been developed by the Moredun Research can give a result within hours and will be able to detect sheep scab before the clinical signs appear.

It’s hoped the test will be available from September through regional labs in England and Wales.

Stewart Burgess of Moredun Research Institute says the test will accurately diagnose the disease and avoid the difficulties associated with identifying scab when it’s sub-clinical and skin scrapings aren’t giving an accurate diagnosis.

He sees the test being valuable to sellers of sheep, who can use it to confirm the sheep-scab free status of stock being offered for sale, as well as to buyers of sheep as part of a health check in their routine quarantine procedure.

As part of the development, Dr Burgess says testing 12 sheep from a group of any size is the figure that will give an estimate of prevalence of the disease and produce a 95% chance of detecting the presence of sheep scab.

“And the test will also be important in situations where sheep scab is suspected, but not confirmed. If the sheep prove positive they can be correctly treated immediately rather than wasting time by treating incorrectly for lice,” says Dr Burgess.