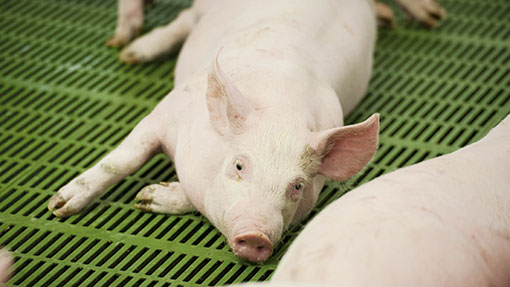 Dutch and Canadian technology could be key to managing UK pigs more effectively, including the use of sound to sense the early signs of disease.

Technology that detects how pigs are feeling will be used on farms within years to help producers find ways to manage them more effectively, according to a leading scientist.

Precision farming tools will measure the mental state of individual animals, allowing farmers to make decisions about rearing pigs, from the way they are housed to the feed they are given.

Daniel Berkmanns, professor in bioengineering at KU Leuven in Belgium, says real-time monitoring of pigs’ actions, movements and interactions could help improve the health, welfare and performance of herds.

“I am convinced we will see the mental state of animals being monitored on a commercial basis in the next few years,” he says.

“Pigs are intelligent animals and we should use their intelligence. If you put animals in a pen they will behave like stupid animals, but if we recognise that they are individuals with different needs and responses, we can react accordingly.

“It will enable us to make things more interesting for them and us, and potentially result in better outcomes.”

Prof Berkmanns says the technology is almost ready to be introduced into broiler units, and it is only a matter of time before it could be used on pig farms.

“The technology is just at the beginning,” he adds. “Continuous, real-time monitoring through image analysis, sound analysis and sensors could have a huge array of uses such as monitoring health and welfare.”

Prof Berkmanns says researchers at the University of Ghent have devised a system to analyse the sounds pigs make to detect illness.

“Most disease in pigs is respiratory. With some diseases you can detect signs just three hours after infection,” he says.

“The system detects a sick cough and sends an SMS message to the farmer, who can go out and decide if they need to call a vet. This kind of system reduces the use of antibiotics on farm.”

“We can create models to estimate water use to within 92% or 200ml over 13 days,” Prof Berkmanns says. If water use drops, farmers are alerted and inspect what is happening on the unit.

“This technology doesn’t mean that farmers will be replaced by the technology,” he adds. “It has to be part of the management system.

“The idea with monitoring is that daily checks are taken over by the technology and the farmer enters to solve the problem, not find it.

“It doesn’t have a value if it is just interesting technology, it has to be able to help the farmer make improvements.”

Using precision farming technology to ensure pigs are only provided with the nutrients they need can result in feed costs being cut by as much as 10%, research at the Department of Agriculture and Agri-Food in Canada found.

While traditional three-phase feeding aims to maximise growth by ensuring the top-performing animals have the nutrients they require, it does not take into account that every pig’s nutritional needs are different on different days, says the department’s Candido Pomar.

Often pigs are overfed nutrients, which are excreted in faeces and urine, creating a waste of feed and a negative effect on the environment, he says.

Instead, investing in technology that will allow pigs to receive formulations based on their real-time needs will vastly improve efficiency.

“Precision technologies help get the right amount of feed to the right pig at the right time,” says Dr Pomar. “It is a total shift in pig nutrition. Instead of basing their nutritional requirements on estimations collected from data, feeding with technology depends on an individual animal’s health, genetics and nutritional status, as well as external factors such as stress and management systems.”

In experiments run by Dr Pomar and his team, 60 pigs were fed diets with varying amounts of lysine from automatic feeders.

Each pig was tagged and identified by the feeder and given a serving of 15-25g of feed. The pigs could return to the feeder as many times as they liked.

During the experiment, the pigs visited the feeder up to 110 times a day, but the overall amount of feed they consumed was 8-10% lower than traditional three-phase feeding.

Further trials discovered that typical lysine use could be reduced by as much as 27% without having any effect on growth performance, resulting in a 50% reduction in nitrogen excretion, Dr Pomar says.

Sound sensors could detect some diseases within three hours of infection and alert farmers by text.

More from from the Bpex Pig Innovation Conference 2014