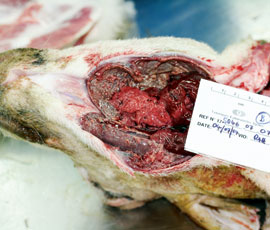 Drenching or bolusing sheep should be done to improve the health and welfare of an animal but done incorrectly it can cause severe injuries, according to David Harwood, AHVLA vet investigation Officer.

More than 270 cases of severe throat injuries in sheep following use of a drenching/bolus gun have been identified by the Veterinary Laboratories Agency in England and Wales over the past 10 years.

These cases were confirmed by post mortem examination, and it is likely many more sheep will have been affected on these and other farms during this same time period.

During the last three months of 2010, a number of serious throat injuries were investigated, which involved substantial losses due to animals having died or been culled on humane grounds.

Drenching sheep particularly for parasite control as well as bolusing with vitamins and minerals is common. When undertaken correctly, both procedures are beneficial causing minimal stress on the sheep.

The AHVLA stresses these cases are rare, but nevertheless provide a stark warning to all flock owners of the potential dangers when things go wrong.

In one case investigated for example, a total of 500 ewes were dosed orally with a vitamin/mineral supplement using a conventional drenching gun.

Six ewes died within the first 24 hours, and a further 40-50 developed swelling under the jaw. Although some of these ewes did improve others deteriorated and died or were culled on humane grounds.

At post mortem examination, there was severe damage at the back of the throat which had been perforated during the procedure.

A further 500 ewes on the same farm were dosed with the same product by the same procedure, but suffered no ill effects; the only difference being the level of skill of the two stockmen who undertook the procedure.

In a separate case on a different farm, the AHVLA undertook a post mortem examination of two ewes from a group of 150 that had been dosed orally with a trace element bolus.

On this occasion, 11 ewes died. The trace element bolus instead of being swallowed and finishing in the stomach, had been pushed through the throat wall, which quickly lead to localised tissue damage and abscess formation.

These abscesses can erode into major blood vessels, and affected sheep will often bleed from the nose or mouth as a result.

There are undoubted benefits of administering drenches and boluses by mouth for parasite control and trace element/vitamin deficiencies.

By following a few simple rules, the procedure can be carried out safely and effectively without compromising the welfare of the sheep concerned.