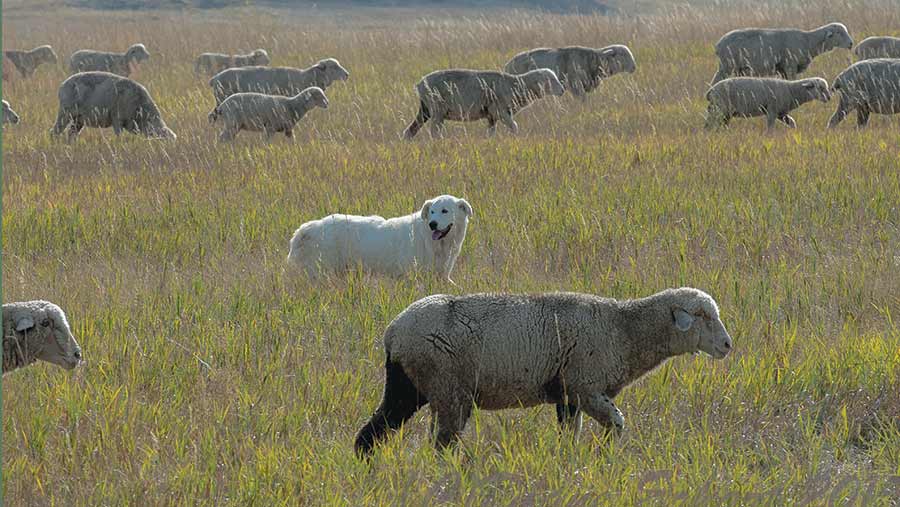 Last year, more than 15,000 sheep were attacked by dogs in the UK, costing more than £1.2m/year, according to insurance agency NFU Mutual.

This is a rising trend, with more happening year-on-year. Could guard dogs that are being widely used to protect US sheep flocks also be the answer in the UK?

In the US it is a much bleaker picture. Total US sheep and lamb losses due to predation accounts for one-third of all recorded fatalities. This equates to 190,000 animals out of a national flock of 5.2 million, costing the industry of $33.3m (£22.5m).

The number-one sheep killer is the coyote – prevalent throughout the nation and responsible for 60% of deaths.

It is estimated that more than 40% of US sheep producers now use guard dogs to protect their flocks against the country’s predators.

Charles and Allison Jarrard, who run a flock of 800 Targhee and Targhee cross Rambouillet ewes, near Kaycee, Wyoming, say without their four guards they would not be able to make a decent profit as lamb losses would be too high.

They run Akbash and Komondor cross Akbash guard dogs – chosen for their friendliness towards people and tireless defence of their bonded sheep family.

While it may seem an unlikely alliance, Mrs Jarrard says it is instinct.

“With guarding dogs it’s never called training but bonding; it’s 90% instinct for these dogs when connecting with the sheep. They come to us at six months partially bonded.”

The sheep range over 2,024ha of dry, open country – mostly sagebrush, where at any time they may encounter mountain lions, wolves, bears and coyotes.

The dogs live out on the range with the sheep year round, where they have access to a feeding station. “We also hand feed every other day to check on the dogs,” adds Mrs Jarrard.

Ewes are mated to Hampshire/Suffolk rams for prime lamb production and at lambing time the threat from eagles and ravens is heightened.

Eagles are federally protected to the extent that farmers cannot physically scare them away by law, but the Jarrards’ dogs can and do.

“One Akbash nearly starved to death in defense of a ewe that had injured itself. It was four days until we found it; still guarding against eagles,” she says.

The only problem with the guard dog’s devotion to duty at lambing is their intense protection can sometimes lead to first-born twin lambs wandering away with its canine guardian while the ewe births a second lamb, says Mrs Jarrard. Consequently, some ranchers choose to remove dogs at this time.

But the Jarrards leave their dogs with the sheep, given their extensive and exposed management system.

She adds: “Without the presence of the dogs, our weaned lambing percentage of 115% would be down to about 80% – maybe less from predator attack – putting the viability of the business into question.”

This led to the founding of 5R Stock Dogs – the most successful supplier of guaranteed bonded guarding dogs in the US.

The company ships out 25 guarding dogs a month to farmers across the country.

First-time buyers now account for 50% of dogs sold as demand increases in the face of growing predation.

His own livestock plays an integral role in nurturing bonding, he says. The pups are introduced to sheep at six weeks with a safe area for retreat. At eight weeks this safe area is removed, leaving the pups full-time with the flock.

He breeds a range of guard dogs from Great Pyrenees, Maremma and Anatolian, to Komondor and Akbash. He says each one offers different guarding qualities.

Selective cross-breeding also takes place to refine attributes needed in the field. “The Turkish Akbash was introduced after the wolf staged a comeback; we needed a more aggressive, agile dog that was people friendly.”