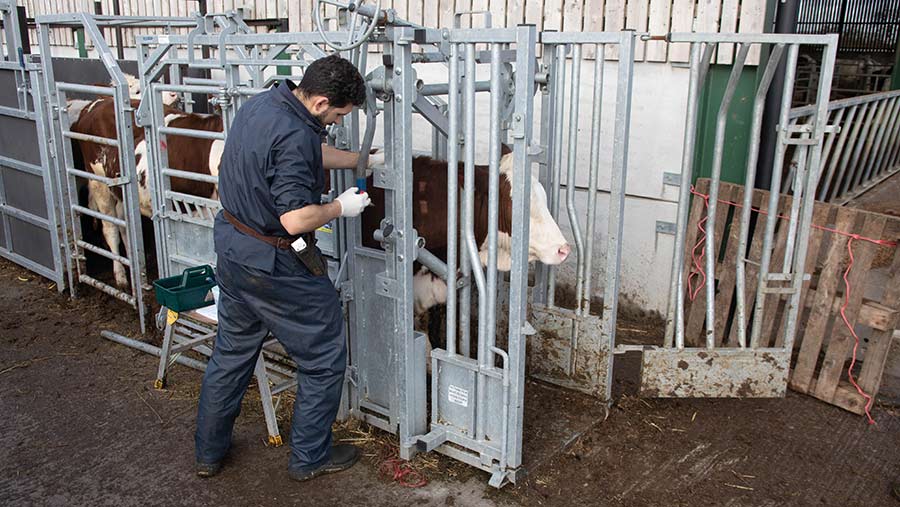 Poor retention and recruitment rates, Brexit and dissatisfaction in the industry could see a shortage of farm vets in the future if action isn’t taken.

Farmers Weekly carried out a survey of 400 farmers and 426 vets to find out the current challenges affecting the farm veterinary profession and seek answers on how it could be improved.

The survey revealed that while farmer satisfaction rates were very high, there was growing discontentment among vets owing to poor work-life balance.

Concerningly, one in two vets said they had been discriminated against while at vet college or at work.

In total, 5% of farm vets said they were seeking a role outside the profession because they felt stressed, their current workload was excessive, they sought new challenges or wanted to improve their salary.

Being on call was another area of dissatisfaction among vets, with 49% saying it was one of the worst elements of the job.

Overall, 46% of vets worked one in three or four weekends on call, and one in two weeks out of hours.

Bovine TB testing was another reason for vet dissatisfaction, with 66% saying it was an “unfulfilling” part of the job. Nine out of 10 vets said it took up at least a quarter of their time.

Almost half of vets said TB testing was a good opportunity to get to know farmers, but 79% said delivering bad news about reactors had a negative effect on them, and a further 58% said they felt anxious the day of reading results.

The highest proportion of farmers surveyed were testing herds at least annually (38%), and 84% said it filled them with dread or was stressful (84%).

Discrimination was more likely in women (70% versus only 15% for male responses) and in vets under 35 years old.

A small number of respondents from diverse ethnic backgrounds said they had also been discriminated against based on their race (5%).

Only one in 10 farmers said they wanted to change veterinary practices.

However, this doubled if the farmer was with a corporate practice rather than an independently owned one, with more than a quarter of farmers (26%) claiming increases in charges as the main reason for this.

A further 10% said they wanted to switch because experienced vets had left the practice since it moved to corporate ownership.

Among vets, 67% were in favour of independent practices in comparison with 33% for corporates.

Three in five vets said they preferred to work for independent practices, claiming they had more autonomy and had the option of buying into the practice.

However, more women worked for a corporate practice (39% versus 24% for males), with all those that preferred to work for corporate practices citing improved security, structure, support, better management, and a higher level of professionalism as the main reasons.

The availability of farm vets differed by region, with 26% of farmers in the South and 47% in East Anglia and the Midlands claiming the number of practices in their area had reduced significantly.

In the North, 23% of farmers claimed the number of practices had bucked trends and increased.

On average, however, most farmers could seek service from 2.5 different practices with 81% using one vet, unless they had multiple species and required more specialist services.

Not all farmers used the farm vet practice located closest to them (42% didn’t) with improved service being the main reason for seeking an alternative further away from the farmgate.

Future and challenges ahead

When vets were asked what was the single most significant change they had faced in the past few years:

Vets said corporatisation had left “divisions between vets” and claimed more vets were now looking for work in small animal practices where out of hours was not required.

Furthermore, they said the loss of EU membership had placed a great strain on recruitment, particularly TB testing.

Vets said retention (18%) and recruitment (15%) were the greatest two issues facing the industry going forward, with independent practice owners saying succession was a huge problem for private practices due to younger vets no longer wishing to buy into practices.

Vets predicted that, in the future, their roles would become more advisory and involve training for farmers with a big swing towards health planning and disease prevention.

One vet said there would need to be a “re-reckoning” of vet costs with medicine sales in decline and fees “barely covering the costs of animal care”.

Alexander Trees, the only vet in the House of Lords, said that in a previous workshop with vets, dissatisfactory lack of mentorship and clear career paths were cited as important causes, not just issues around salary and work-life balance.

Commenting on the Farmers Weekly survey, Prof Lord Trees said the service provided to farmers appeared to be satisfactory from the results, despite the current challenges being faced by the veterinary profession. However, he noted this might change as recent challenges become more evident.

For several years, roughly the same number of EU- trained vets as UK- trained vets admitted to the Royal College of Veterinary Surgeons (RVCS) have registered to practice in the UK.

But, according to the RVCS, this is now at its lowest level since 2014, with fewer than 20 registered in September from monthly highs of more than 130.

“The veterinary profession is clearly very critical for the UK in terms of national priorities, such as animal welfare, food security, food safety, prevention of zoonotic diseases and pandemic preparedness, and it is a concern,” said Prof Lord Trees.

A spokesman from the RCVS said: “It is great to see that farmers place so much trust in their vets, and value their expertise and input into their businesses.

It demonstrates that vets and their teams are providing a high level of service and are consistently doing so despite significant challenges, and the impacts of EU Exit and Covid have compounded these.”

However, the spokesman said it was disappointing to see such high levels of discrimination.

They added: “There is no place for such behaviour, no matter the situation. We expect veterinary practices to support any member of their team who might be subject to discriminatory behaviour and to call out and challenge any incidences of such from clients.

“We would also support vet practices in their decisions to end client relationships if behaviour like this was to persist.

“We encourage vets who are at all worried about these issues to seek support, either through their practice in the first instance, the College’s advice team, the British Veterinary Ethnicity and Diversity Society, or Vetlife.”

Farmers Weekly is holding a roundtable on Friday 22 October with stakeholders, to discuss how the industry can overcome these challenges.

Thanks to our sponsors for making this article possible. Farmers Weekly had full editorial control of this report.

VetPartners is at the forefront of the farm industry evolution, enhancing the health of livestock and supporting farmers to be more productive, efficient and sustainable. We are committed to investing in our people, our practices and the latest technology and providing the very best advice to help UK agriculture grow.

Sharing knowledge and listening to the farming community is key to helping shape the future of the industry, which is why we are proud to support this survey.

XLVets is a thriving community of independent, farm veterinary practices. Members of our community are proud of their independent status and the freedom it provides to focus on our patients, clients and people.

As a community, our members are committed to working together, sharing knowledge and experience to deliver the highest standards of livestock healthcare.

With increasing recognition of how sustainable farming and food production will evolve, we stand ready to support our clients to meet new ways of working for the benefit of animals, farmers, society and the planet.

Inevitably, there are challenges ahead for many of us and this survey will help us identify what some of those might be. We thank you for your participation.