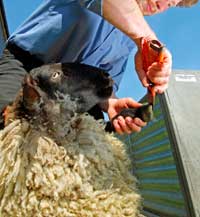 Warm, damp conditions could see a rise in the number of footrot cases, with swift action vital to prevent significant losses.

ADAS sheep consultant Kate Philips says prompt action is fundamental to limit the disease’s effects. “Footrot is a serious, violently contagious infection, and current warm, damp conditions mean it could run rife. If left untreated, not only is it a serious welfare concern, but long-term problems can arise, with ewes unable to graze and potentially affecting fertility.”

Information from the Department of Agriculture and Rural Development, Northern Ireland, suggests the inability of a sheep to graze from footrot, can depress lamb liveweight gain by up to 100g for every lame foot a day, lengthening the finishing period.

But, dealing with scald early can help stop the onset of footrot in many cases, suggests Ms Philips.

“Scald can occur overnight, with anything abrasive such as sharp stemy grass and thistles creating an entry site for the bacteria Dichelobacter nodosus. However, treatment is straightforward and effective if done properly,” adds Ms Philips.

Ms Philips also suggests washing dirty feet prior to treatment. “When sheep’s feet are muddy, clean with water first. Also when pastures are muddy, leave the sheep on a dry concrete area for 30 minutes allowing the chemical to get into the feet.

“Also with footrot, an antibiotic injection is often worth giving and after five days of treatment its worth looking to see if the hoof needs trimming,” she says.

Breeding for genetic resistance to footrot is also something SAC with support from EBLEX has identified as being a valuable tool.

“This confirms conventional breeding approaches can be used to improve resistance and assist in its control. It also underlines breeding for resistance will give greater and more rapid results in flocks with high levels of footrot.”

It may also be possible to develop an EBV for footrot resistance in future, says Dr Genever.

“To develop an EBV ewes should be scored more than once; ideally, at the same time of year, for the most accurate EBV development,” suggests Dr Genever.

“A conventional EBV approach based on ewe hoof scoring together with the benefits of a cleaner pasture, can reduce the prevalence by between 0.5 and 1% a year,” she says.

A clean pasture is also something Ms Philips recommends. “The footrot bacteria can live on pasture for 10 to 12 days, so rotationally grazing sheep and separating infected sheep can help control footrot.”

One sheep farmer with a strict footrot eradication programme is Marcus Maxwell, Dumfries. He has practically eradicated footrot, reducing cases to less than 1% by breeding out anything with the infection.

“Prior to our strict policy we found 80% of those animals getting footrot would get it again within a year. But by being a closed flock, we are fortunate, as we can control the genetics,” he says.