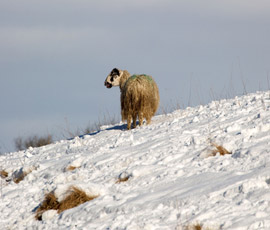 Livestock farmers fear thousands of animals have been killed in heavy snowfall over the weekend, which has been likened to the snow crisis of 1963.

Cumbrian farmer Eric Taylforth, who runs a stock of 2,000 fell sheep and cattle, said up to 20ft of snow had accumulated in areas and animals were cut out by drifts, starving and lying trapped beneath.

“It will be a disaster if it carries on and farmers are saying it will be a bit like 1963 when half the sheep in the Lake District died,” he added.

Mr Taylforth, Millbeck Farm, Great Langdale, said there was no fodder and grass was covered in snow and the condition of sheep was “very poor”.

He fears animals in some fields were buried under snow, but he will not know how bad the situation is until the snow and ice melts enough for him to be able to get to them.

“Half of our livestock are up in the hills. There are sheep in three different valleys and there are snow drifts up there,” he said.

Mr Taylforth added that the effects of extreme weather were testing farmers’ resilience.

“The government did not understand [our situation] and they cut the farm subsidies off these hills. It has been the biggest disaster that has ever happened to us,” he added.

The snowy weather has also been causing serious problems for farmers in Northern Ireland and Scotland.

Farmers in Dumfries and Galloway and parts of Argyll and the Islands are battling through some of the worst March weather on record.

Heavy drifting snow over the weekend has placed many ewes and lambs in peril and severely disrupted the delivery of vital feed and fuel stocks.

The daily collection of milk in these parts has also been badly affected with several farmers having to pour away overflowing tanks. Loss of power in these areas has also placed an additional strain on farming businesses.

NFUS Dumfries and Galloway regional chairman Andrew McCornick, who farms at Barnbackle, Lochfoot, Dumfries, said: “We are well through our annual lambing so the snow couldn’t have hit at a worse time.

“We have managed to dig our way around most of the fields with ewes and lambs in them. We managed to get feed to those that we have found and we have been digging many of them out of the snow.

“The drifting snow is so bad that there are still many vulnerable sheep that we are still battling to get to and we know that we are likely to face losses when the snow has cleared.”

In Northern Ireland, Sinn Féin MLA Oliver McMullan said farmers in County Antrim had been unable to get to their farms due to roads blocked with snow.

As a result, many have been unable to feed or check the welfare of animals during the busy lambing period.

“As emergency services battle valiantly to restore power and services to the greatest number of affected people, those living in isolated and rural areas, particularly farmers, are abandoned and left to fend for themselves,” said Mr McMullan.

“The snow is simply too deep for even farming equipment to clear the minor roads. Animals are in distress because of lack of feed, farms buildings are collapsing.”

But the Ulster Farmers’ Union praised the efforts of farmers throughout the weekend as heavy lying snow persists in parts of Northern Ireland.

UFU deputy president Barclay Bell said it had been a very tough couple of days for many farming families.

“The heavy snow and high winds came at the worst possible time for many farmers who are lambing sheep. They have gone to great lengths to get animals indoors and out of the elements,” added Mr Bell.

The UFU said the full picture of the problems faced over the weekend would emerge in the coming days with concerns remaining about animal losses, ongoing power failures and blocked minor roads.

Send in your snow and extreme weather pictures to philip.case@rbi.co.uk