Embracing the North American strategy of feeding a high-protein pellet to calves has been part of a ration rethink that has knocked one month off finishing times for rose veal calves at Warren Hill Farm, Dorset.

With the support of Mole Valley Farmers nutritionists, Chris Bartram and David Balls, last year the Cox family asked to trial a new approach to protein feeding by comparing performance on a 24% pellet, versus their usual 17% protein pellet fed in the first three months of age.

The weights of 130 of their Holstein Friesian bull calves were monitored as part of the farm trial, with roughly half on each pellet type from 12 days to three months old.

The results were marked, with daily liveweight gains (DLWG) showing a particularly large increase of 34% from weaning until three months.

The high-protein group averaged 1.3kg/day and the lower protein group, 0.97kg/day. Pre-weaning there was also a 5.4% increase in growth on the 24% protein diet.

See also: How a beef farmer has shaved 90 days off finishing time

Rupert Cox comments: “That’s quite a big increase. Condition wise – especially in the two-to-three-month period – they look a lot better.” 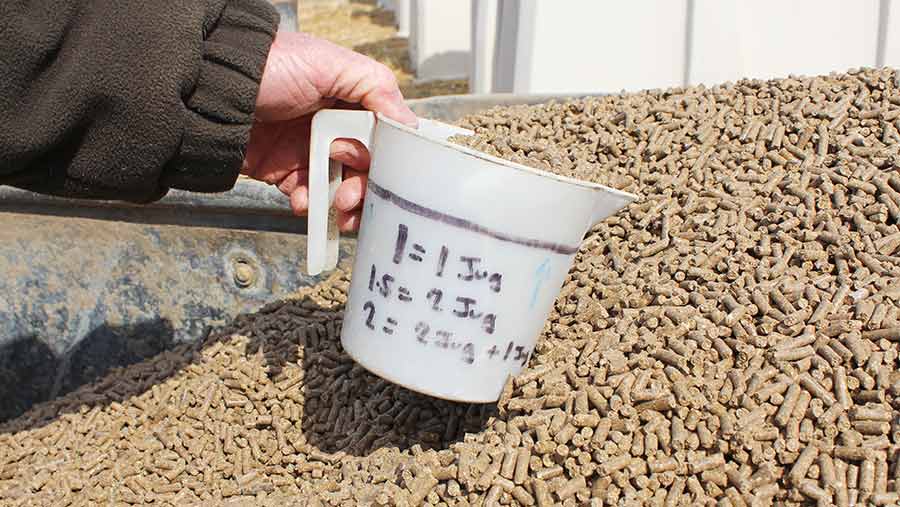 Rupert is one of three brothers who have remained part of the farming business with their parents Wakely and Caroline. The family farm 485ha in total, including a contract farming arrangement.

About 1,200 black-and-white bull calves are brought in every year from six local dairies and arrive on farm at about 12 days old.

They are bucket fed 600g of a 24% protein calf milk replacer (CMR) a day across three litres fed twice a day, until old enough to go on to once a day.

Fresh calf pellets are provided daily. About 900 head are kept entire and finished as rose veal at 440kg liveweight. The rest are sold as steer stores at 18-24 months old.

Since witnessing the boost in DLWG from the change in pellet, the farm team has completely swapped to the 24% protein feed, which is specially produced for them by Mole Valley.

The pellet includes a number of protein sources including soya, rape, sunflower and maize distillers, as well as wheat, barley and soya hulls.

Dr Bartram says there is limited recent research looking at the protein nutrition requirements of the calf.

However, he believes feeding higher levels or protein fits better with the natural system, considering a cow’s milk is about 27% protein and the young calf’s total protein requirement is 28% DM.

He explains: “Pre-weaning, the calf’s concentrate intakes are relatively small so it makes sense to feed a high-protein pellet to ensure a calf’s total protein requirements are being met, in combination with the CMR.

“Also, the danger is, if you don’t feed a higher protein concentrate, there’s a gap between protein requirements and supply around weaning, which could be a problem on some conventional systems feeding a lower protein pellet.”

Rupert believes the fact calves are bigger earlier on benefits the animal right through its life. “If you can get a calf that’s super at three months old, it will be fine for life. The most important part of a beef system is up to three months,” he says.

Wakely also thinks the fact calves are stronger means they are more able to fight off disease better.

He says: “By focusing on nutrition and having a better-quality ration, they’re growing better and not having nearly as much pneumonia.”

Scours is commonly viewed as a risk of feeding high-protein diets to young calves, however the Cox’s have not experienced problems.

Nevertheless, they emphasise the importance of providing adequate roughage and operating consistent management practices on such a system.

This includes feeding milk at the same time and temperature every day and washing and disinfecting feeding equipment daily.

Having witnessed the boosts to early growth rates, the Cox’s have been keen to continue the improvements right through until finish.

Calves have since been moved on to a 33% protein mineralised pellet from three months of age until finish.

This was fed as a replacement for urea and mixed with home-grown barley, straw and minerals.

Up until five to five-and-a-half months of age this is fed to produce a total diet of 16% protein. After this, total protein is reduced to 14%.

David says the main difference is the fact the pellet is providing cattle with several sources of protein and includes soya, urea, maize distillers, sunflower, rape, fats, molasses and yeast.

“The main thing is the improved level of digestible undegraded protein (DUP) – or rumen bypass protein – so the pellet is providing pure protein, rather than just quickly fermentable protein found in urea.

The calves are still growing frame at that stage so you need a blend of protein sources to prevent a check in growth rates from one feed to the other.

The yeast also helps rumen health and digestion when feeding a high cereal diet,” he says.

Growth rates subsequently improved by 39% from three months to five-and-a-half months, with cattle averaging 1.5kg/day versus 1.1kg/day on the previous ration.

Rupert comments: “That means we’re finishing sooner so there’s not the costs associated with having money tied up in them.”

They have yet to get killing out percentages or grading from cattle reared on this system. However, the Coxs believe better fat cover is clearly visible.