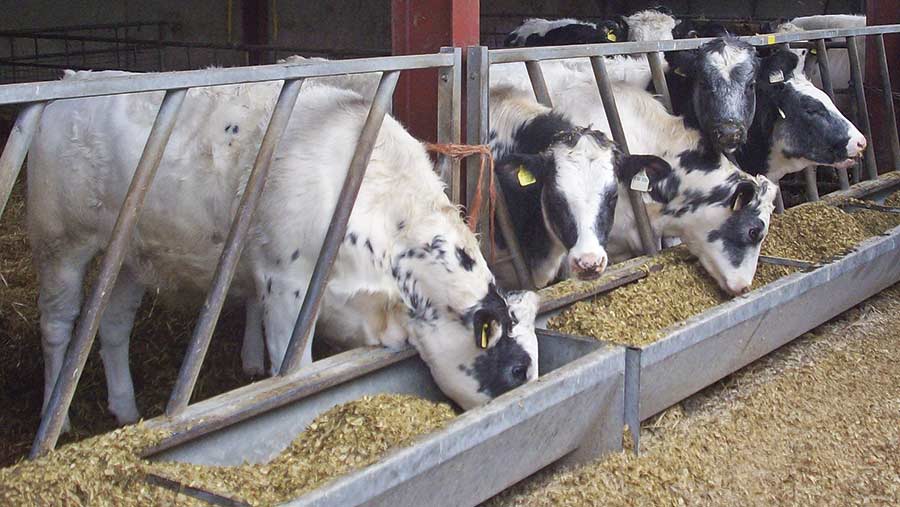 Carcass value was £74 higher for the heifers fed 160g crude protein (CP) but the higher feed costs of the extra protein meant overall margin over feed was £56 better off overall.

He says the 160g CP diet resulted in a superior feed conversion ratio, growing cattle at 1.1kg a day compared to 0.98kg for a similar feed intake to the 125g CP diet.

“Industry requirements for protein are out of date for fast-growing young cattle,” says Mr Marsh. “The low protein ration was not meeting dietary requirements to optimise performance with the predominantly continental-bred heifers.”

Mr Marsh adds that further work evaluating how older heifers respond to protein, different protein types and comparisons of steers versus heifers and natives versus continentals is desperately needed.

However, he suggests a diet of 120-140g CP/kg DM should be adequate for older (16+ months) cattle that have already grown their frame.

There was a mix of breeds, including British Blue-cross (26) and Hereford-cross heifers (6), since at that time the University farm had just gone down with Tb and had to keep all the heifers.

Both British Blue and Hereford crosses were split evenly in the study and fed a total-mixed ration (TMR) in the form of one of two rations (see table 1 below).

“It is of course recognised that Hereford heifers are more suited to extensive grass based systems,” explains Mr Marsh.

Feeding two protein sources is better than one as it minimises issues of protein supply if there is a problem with protein quality in one of the straights, says Mr Marsh.

“It’s our standard practice now to feed rations with protein from soya and distillers. Issues with protein quality particularly can apply to dried products. If they are dried with excessive heat this may denature some of the protein.”

While soya is costly, when included, it makes room for more homegrown cereal. A 46% CP soya allows rooms for more barley in your ration compared to rape at 34% CP, he explains.

“This is a further area of research we need to look into,” he says. “Comparing imported soya against homegrown rapeseed and subsequent digestible undegradable protein (DUP) levels in rations would be useful.”

First and foremost, he adds, is the need to satisfy the rumen degradable protein (RDP) to ensure efficient rumen function.

“In previous trials looking at feeding elevated levels of DUP in rations we have only seen a response with young cereal fed continental bulls at three-to-seven months old,” says Mr Marsh.

“No response has been seen with young Holstein bulls or older cattle of any breed type. Therefore, in most cases satisfying the RDP requirements of the cattle is key.”

Dr Mary Vickers of AHDB Beef & Lamb says current models of feeding are based on work done as much as 40 years ago.

“We know that beef cattle can make use of non-protein nitrogen, which can be converted to protein by the rumen microbes and this can be a cost effective way to provide some of the protein in the ration. Other sources of protein can be provided by feeds such as rapeseed meal, soya bean meal, pot ale syrup and distillers grains.”