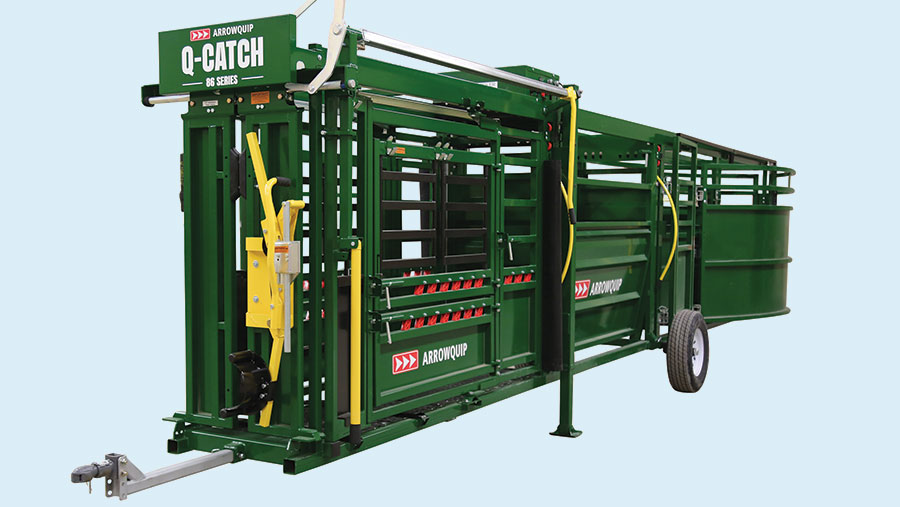 A new cattle handling system has been launched by Canadian maker Arrowquip that is designed to reduce animals’ stress levels.

Key to the Q-Catch 86 Series crush, race and forcing pen is the entry point, which allows cows to enter at the front of the pen, rather than the rear. This means they turn back towards the entry point to step into the crush, which apparently keeps them much calmer.

The rubber floor reduces instances of slipping, and anti-rattle rubber hinges and nylon bushes make it the quietest cattle crush on the market, says Arrowquip.

Once the cow is in the crush, access to the animal is via removable panels on both sides – either full or part height – and the unit can also squeeze smaller animals to reduce the risk of injury to both cow and operator.

Optional extras include a head holder that has a one-handed push-pull system, with no secondary locking needed, and a sternum holder to prevent the animal sitting down in the crush.

The base price for the Q-Catch 86 Series with vet cage is £6,188, not including the head holder or sternum bar. There is also a portable version (pictured) that retails for £13,938 and includes a race and forcing pen. On this version, on-board manual or battery-powered jacks can be used to quickly attach or take off the wheels before or after transport.

The three UK dealers are: Wise Agricultural Supplies, near Darlington; Harpers Farm Supplies, north Devon; and Penderfeed at Duns, in the Scottish Borders.