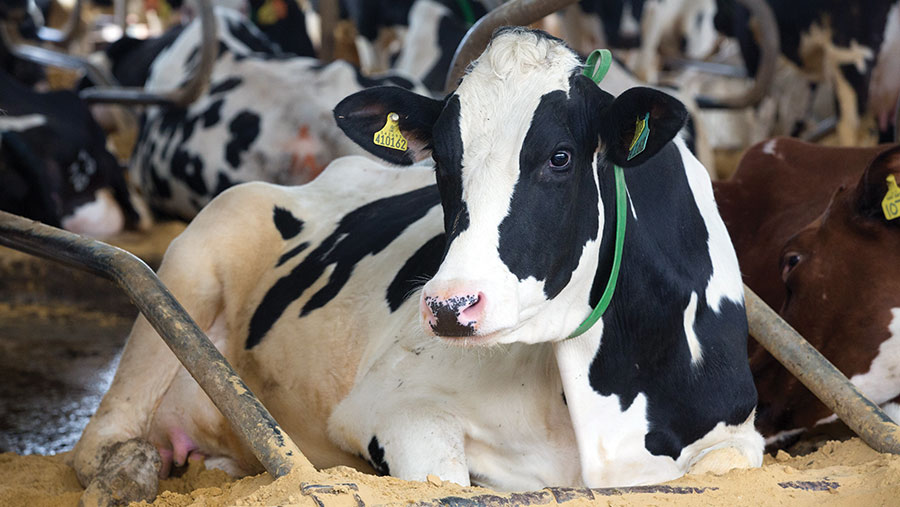 A new on-farm measurement for dairy cow buildings, known as living space, has been developed to provide a better understanding of space allowances for adult dairy cows.

Researchers believe living space is a better way to measure cow space than the traditional definition, loafing area, which is ambiguous, lacks industry consensus and causes confusion among farmers, they say.

PhD student Jake Thompson, from the University of Nottingham, visited 50 randomly selected farms in Great Britain once during the winter housing period of 2017/18 to investigate how much space housed dairy cows were given.

Most farms housed cows in cubicles, and herds had a mix of calving patterns: block and year-round.

The AHDB-funded study found farmer definitions for loafing areas and their opinions of loafing space importance were hugely variable, which was unsurprising given the lack of industry consensus, says Mr Thompson.

Mr Thompson said the results were not surprising given that little research has been carried out into loafing area requirements and even industry guidelines for space requirements vary greatly.

He concluded living space was a better measurement for the dairy industry to use because it makes it easier to compare space across farms with different cubicle housing set-ups.

For example, a farmer with a new shed containing 4-4.5m passageways – which is great for cow flow and above industry guidelines – would score poorly using loafing space guidelines because passageways are usually excluded from this measurement, he said.

In comparison, living space (see definitions box) promotes the use of wide passageways as a positive, but at the same time, would also increase for farms where farmers had modified traditional buildings by providing cows with outdoor space.

“Living space has a set definition which allows comparisons to be made between different housing layouts,” he added.

To ascertain what difference space actually makes to cow welfare, researchers at the University of Nottingham are now in the process of comparing two groups of cows: one group given 3 sq m of living space per cow and another group given double this.

They will assess and compare:

Results from the study will be available next year. If space does have a positive effect on cow welfare, Mr Thompson believes more research will be needed to find out how much space cows should be given.

“All of the information around loafing space is very ambiguous and we have all these recommendations, but none of them are based on any evidence.”

“Rather than pluck another number out of thin air and come up with another number farmers don’t really understand, we need to understand how it affects cow welfare and how the economics stack up.”

Loafing space: Non-feed, non-lying, non-passageway areas where cows can roam freely either indoors or outdoors. For example, indoor or outdoor concrete or woodchip pads not used for bedding.

Living space: a bespoke definition that includes the additional space available for dairy cows above the baseline requirement for movement and feeding, excluding lying areas.

It accounts for wider passageways and additional outdoor areas and therefore provides a useful estimate of true available space.