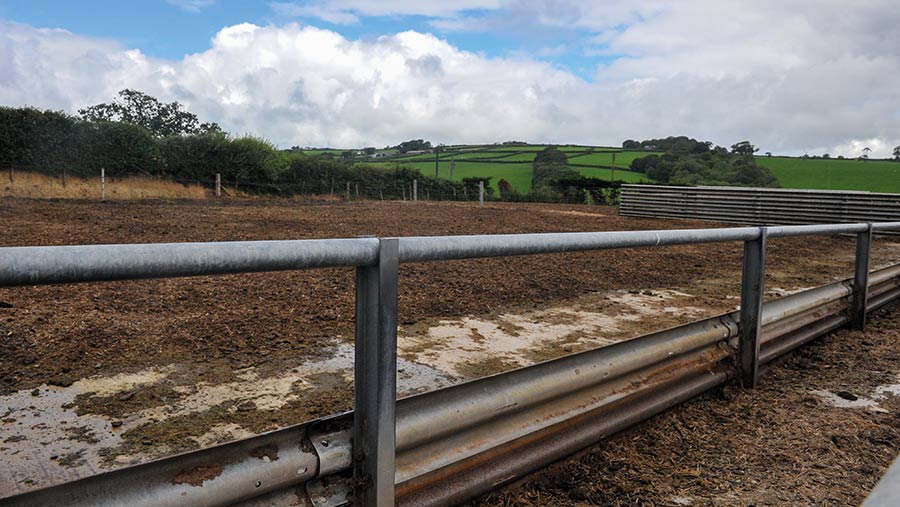 Since then, he has resolved some of the common challenges associated with this alternative to conventional housing.

Cows and calves come on to the pad in October and are run as three groups, separated by electric fencing: cows with heifer calves, cows with bull calves – which are kept entire and intensively finished on barley – and in-calf heifers.

“The cattle learn to respect the fences when they are fairly young; we have never had problems with them breaking through the fences,’’ says Mr Friend, who farms with his wife, Sue, and their son and daughter-in-law, Richard and Emma, at Ashbury, near Okehampton.

The first corral, at 10x50m, was created as a trial for wintering a small group of cows and was, in Mr Friend’s words, a “disaster’’.

The trough had been placed at one end, which resulted in the cows repeatedly walking up and down the corral to eat and to shelter from the weather under a hedge. “They basically trashed it,’’ Mr Friend recalls.

Although the design was not ideal, it convinced him of the benefits of keeping cattle outdoors.

“My daughter was home from university and one winter’s afternoon she went for a walk around the cubicles and the corral, and when she came back to the house, she told me how she thought the cows outdoors looked so much better than those indoors – and she was right.’’

So, rather than giving up on the corral system, it was extended to create a 48x40m pad.

The site was excavated to lower the surface to the same height as the farmyard buildings to provide shelter, with a feeding area at its centre.

“We excavated it to a level where the hedge is now 4.5m high, which creates really good shelter,’’ says Mr Friend.

The redesign worked so well that he extended the corral again, adding a 35x43m area and, later, a further 26x40m.

The system is home-designed and has developed from lessons learned earlier on.

“After the first mistakes we knew what we had to do to get it to work better – the feeding area, the shelter and the drainage,’’ says Mr Friend.

“We are happy to design and build things ourselves; there isn’t much that we can’t do.’’

The wood peel is bought from a mill that manufactures fencing posts.

In the early days, Mr Friend sourced from a mill near to the farm – he collected the peel, often six or seven loads in a single day, and there was no charge for the material.

But that mill closed and he must now travel further to get the peel and, since there is now a demand for it as a bedding material, it comes at a cost.

He pays about £110 for each 7-8t trailer load but calculates that the true cost is more than double that once wear and tear on the tractor, diesel and labour are taken into account.

On average, 40 trailer loads are required during a single season.

A woodchip layer of around 25cm in depth is spread on the pad before the cows are removed from fields in October.

Another layer is added when the calves are weaned in January, and a further layer ahead of calving, to provide a lying area to keep udders and teats clean.

Once the herd is turned back out to grass from mid-May, the peel and muck are spread onto the farm’s corn stubble and ploughed in, adding humus to the soil.

The drains are renewed every year because good drainage is essential for the system to work – the farm gets an annual average rainfall of 1,650mm.

“There are shallow stone drains, which we dig out and replace,’’ Mr Friend explains.

“You can still get areas on the corral that get wet if there is heavy rain over two or three days, though, especially nearer the spring when there is more of a build-up of material.’’

The corrals have feed troughs with capacity to hold up to three days of feed – feeding feeding takes place on a Monday, Wednesday and Friday.

Home-made creep gates allow the spring-born calves to access a total mixed ration of silage and cereal in the yards and buildings.

“Apart from the fact that the bull calves are not castrated, they feed separately from the heifers because they get much more feed,’’ says Mr Friend.

“We also keep the bulling heifers separate because they wouldn’t be able to compete with the cows.’’ 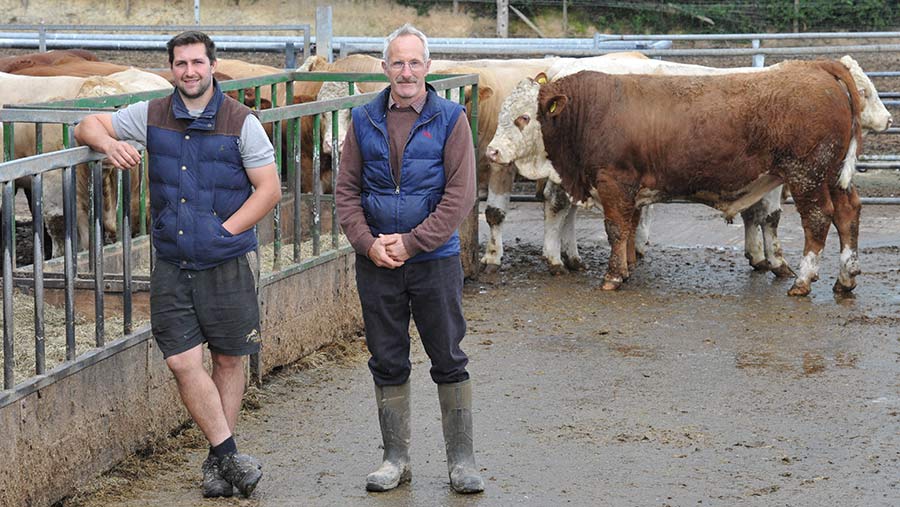 There are 34 in-calf heifers on the pad this autumn, compared with up to 50 when the herd was expanding.

About 80% of the straw produced is fed in the cattle diet as there is little need for it as bedding.

“We are in a marginal area for growing corn, but the straw is what makes it worth it,’’ says Mr Friend.

“We make reasonable-quality silage and add the straw to it in the mixer wagon.’’

The cows calve on the corral from the end of April and once a calf has fed and is suckling, the cow and calf are turned out to grass.

Most of the herd will have calved by the end of May, and after this, any stragglers calve at grass. A camera linked to a tablet is used to monitor calving.

Although corrals can sometimes get a bad press, Mr Friend says they work, and he is confident that his animals are healthier than they would be indoors.

“We don’t vaccinate, and we don’t get any issues with pneumonia or scours in the calves, or lameness in the older animals.

Mr Friend says the cattle thrive on the corral.

“We cross North Devons with Simmentals. They are hardy animals and quite comfortable outdoors.

“If we have a howling gale and it is pouring with rain, and they are sheltering against the hedge, I think “poor girls’’, but on a dry day, when they are lying flat out on their sides in the sun, I say, ‘I wonder where you are happier now!’’